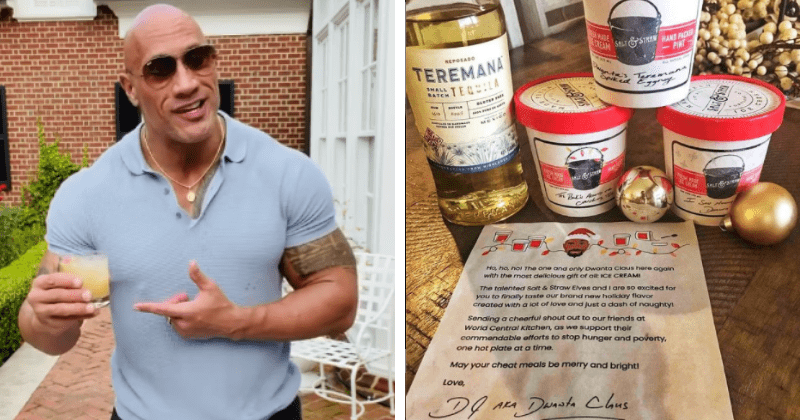 The holidays just got better 'cause Dwanta Claus is coming to town! Dwanta Claus is The Rock’s holiday-loving alter ego. According to Delish, last year, the Jumanji: The Next Level actor invested in Salt & Straw and teamed up with the company to come out with holiday-themed ice creams. At the time, one pack cost $65 and consisted of five different pints with two flavors. The pack consisted of cutely named flavors like: I Saw Mommy Kissing Dwanta Claus, Rock'n Around The Christmas Tree, Peppermint Cocoa, Cinnamon Chai Spiced Eggnog and Chocolate Gooey Brownie. This year, he promised a Teremana Tequila- infused ice cream and boy, did Dwanta Claus deliver!

PEOPLE reports that this year's new, limited-edition Dwanta’s Teremana Spiked Eggnog ice cream is made with the actor's own tequila. The holiday ice cream is a delicious-sounding, silky, frozen custard mixed with amontillado sherry, nutmeg with a sprinkle of salt. According to the website, it's described as "Oaky vanilla from Teremana’s Reposado shines against rich, silky custard. We splash in amontillado sherry and warm it all up with nutmeg and salt for a toasty finish."

You can get the special eggnog flavor on its own or get it as part of the Dwanta Claus “Naughty, Nice & Spiked” pint five-pack. As the outlet puts it, this  "includes Salt & Straw's classic Double Fold Vanilla and Chocolate Gooey Brownie, and the return of last year's “Naughty & Nice” duo, I Saw Mommy Kissing Dwanta Claus (chocolate chip cookie dough and milk chocolate caramel fudge swirled into a decadent whiskey ice cream base) and The Rock'n Around the Christmas Tree (a spruce ice cream filled with gooey frosted brownies, raspberry jam, and red and green glacé cherries)."

Not only do the boozy ice-creams sound oh-so-festive and yummy, but they also have additional goodies.  The best part? You can get handwritten pint labels by the hunky actor himself. The 2020 Dwanta Claus Holiday Pack pack will be available online for $65. If all this feels like a luxurious indulgence, fear not. The team is donating $1 from each eggnog pint sold through December 31 (including those in the five-pint holiday pack) to chef Jose Andres' World Central Kitchen’s Restaurants for the People program. Teremana Tequila will also match every $1 donated. So this year, in a small way, you too can help many families who are struggling with hunger and food insecurity.

Sure, the ice cream is great. But the best part? $1 of every pint goes directly to @WCKitchen food relief efforts! Thanks @TheRock @saltandstraw 🙏 https://t.co/G0Z498RKQj

"Dwanta Claus is back to spread delicious holiday cheer with my friends at Salt & Straw and it’s getting boozy," said Johnson in a press release. "We had some fun creating our new Teremana Tequila infused flavor and more importantly, we are honored to support the incredible work done at World Central Kitchen and their efforts to end hunger and poverty."  He quipped: "May your cheat meals be merry, spiked and bright this holiday season!”

can i be your elf, PLEASEEEEEEE

For those curious about his Tequila brand, the former wrestler launched Teremana just before lockdowns began in March.  “I looked at this as an opportunity to create a tequila experience that brings people together in good times, not-so-good times and everything in between,” he told PEOPLE in September. Smooth with hints of citrus and vanilla, the tequila is something he “spent years developing,” making multiple trips to Jalisco, Mexico, where the distillery is located. "Teremana is a legacy brand for me," said Johnson, who is father to daughters Simone, Jasmine, and Tiana. "I’m going to work extremely hard to not only deliver legacy to our consumers but also I want to pass on this legacy to my children."

In 2016, when the hunky and humble 48-year-old was crowned  PEOPLE's Sexiest Man Alive, he revealed that his close relationships are what keeps him grounded. “I’ve made big sweeping changes in my career over the years, which have served me nicely,” he said. “But I feel that the big sweeping changes that happened in my life, in my relationships, of being a dad, of being a partner, and the things that I was and the things that I am, has really lent itself to a confidence.”  He went on to say: “We just have this awesome family that is truly non-traditional but so rooted in love. And that’s such a cool thing. I’m very proud of it.” Do we really need another reason to adore The Rock?