Brett Kinloch suffered from an aggressive form of cancer that was inoperable. He was able to spend a few hours with his newborn child before he passed away 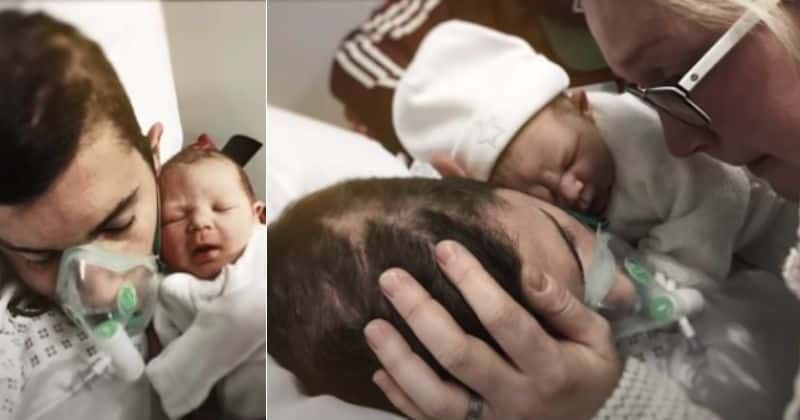 A dad in the UK who battled an aggressive form of brain cancer for 4-years ultimately succumbed to the disease hours after meeting his newborn child reports the Leighton Buzzard Observer. The bittersweet tale that was shown on Gogglebox, a British TV series, for a Stand Up To Cancer special, viewers got to see one of the greatest examples of a father's love when Brett Kinloch, a brain tumor patient, kept himself alive just long enough to meet his third child according to Metro.

Dad Meets His Baby Born Three Hours Before He Dies, Brett Kinloch, 31, died of a brain tumour on 11 February, surrounded by his family at Milton Keynes Hospital. pic.twitter.com/gb5JdKUj89

The episode began with how Kinloch and his wife, Nicola met; they were both teachers. They started off as friends but realized that there was something more to their relationship. They soon fell in love and began a family together, and had two beautiful girls: Freya and Ella.  "He really enjoyed being a dad...he was such a good dad," Nicola said. "It made me really happy," she added, "But, then he got poorly."

Kinloch had already beat cancer the first time, after the birth of his eldest daughter. However, he relapsed later. Just before Christmas, they received the devastating news that cancer had returned and the tumor was inoperable. Nicola said, "We sat down with his neurologist and they went through the extremes of what the surgery could lead to. We almost started to panic and they took as much of the tumor away as they could. When the tumor grew back, when I was pregnant with Arya (third child), it was more aggressive. It couldn't be operated on."

When Nicola went into labor with their third child, she was taken to Luton hospital. On the same day, Kinloch suffered a seizure at home and was taken to Milton Keynes Hospital. Nicola knew that they didn't have much time left. 50 minutes after Arya was born, Nicola, her mum, Jill, and her newborn daughter were on their way to see Kinloch. Nicola made it to the hospital and was able to meet her husband along with their newborn daughter. According to the Daily Mail, Nicola said, "It was like a race against time to make sure we were ok but could get going [to the hospital he was in]. "I knew what was going to happen and I wanted him to know that it was ok. I told him it's ok, don't hurt yourself anymore."

She then placed their hours-old daughter on him describing how she looked to him. "I laid her on top of him and she had a cuddle. He could hear what was going on and he knew we were there, I’ll always be grateful for that," she said. That would be the first and last time he held his baby girl. Three hours later, Kinloch passed away at 8:25 a.m.
Nicola also thanked the hospital staff for all their help and co-operation. "I can never thank the NHS enough – the call-out doctor called Tim who kept Brett alive, the paramedics that took him over there... there were nurses from all areas of the hospital that just wanted to do everything they could."

As for her husband, Nicola reminisced that despite his prognosis, he still wanted to provide for his family, not giving up even once. She said, "Brett never never made excuses and he lived life to the full. He was still working three weeks before he died, he wanted to provide for his family. He loved life and he never let [his illness] stop him living. We went on holidays abroad, we took the kids to Disneyland. Even when he could no longer drive, he got a bus pass and would take Freya out."

The family has had support from friends and a GoFundMe page was launched to help with the family out. Nicola said, "The offers of help and support from our family, friends, and even complete strangers have been so lovely and humbling – I appreciate every one of them."