The two, who have been accused of child sex trafficking, were invited to the White House in 1993. 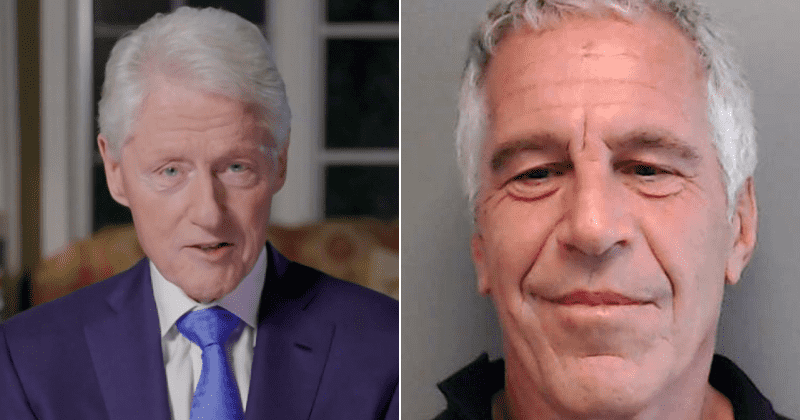 Bill Clinton was photographed with Ghislaine Maxwell and Jeffrey Epstein when the pair were invited to the White House in 1993. The images have recently resurfaced after they were published by The Sun, just days after Maxwell’s last court appearance on sex trafficking charges in Manhattan. Maxwell's appearance is related to her alleged procurement of underage rape victims for the convicted pedophile, Jeffrey Epstein. At the time the pictures were taken the duo toured Clinton’s residence and the East Room during a reception after Epstein reportedly donated money to have the Oval Office refurbished.

A source shared,  "The photos show just how close Ghislaine Maxwell and Jeffrey Epstein got to one of the most powerful men in the world — in the most powerful building."
The two reportedly got to know Clinton well and even took him on an African tour in Epstein’s "Lolita Express" jet, after Clinton's eight years in the White House. But these images show them already seemingly close to Clinton just a year into his presidency, the media outlet noted.

Ghislaine Maxwell, Jeffrey Epstein and President Bill Clinton during a tour of the White House. September, 1993.
Epstein gave £7,280 to the refurbishment of the Oval Office. pic.twitter.com/wxQM8XiXX0

However, Clinton has maintained that he never knew anything about Epstein’s crimes. After Epstein was arrested on suspicion of running a child sex trafficking ring, he was found dead in a New York jail cell in 2019. As for Maxwell, she faces eight charges relating to the billionaire’s illicit activities, between 1994 and 2004. The 59-year-old denies all charges and faces trial in July. Gloria Allred, a lawyer representing alleged victims, told the BBC that bail should be "out of the question" as it "would be very upsetting to the victims."

The former British socialite is the daughter of media mogul Robert Maxwell. Ghislaine Maxwell was reportedly in a relationship with financier Epstein in the 1990s. She is allegedly the person who introduced Epstein to wealthy and powerful figures including Bill Clinton and Prince Andrew of the British Royal Family. Maxwell was arrested last year, and her brother Ian Maxwell told the news outlet that she was being held in "degrading" conditions in jail in Brooklyn.

Ghislaine Maxwell, the former girlfriend of the late Jeffrey Epstein, pleaded not guilty to federal sex trafficking charges in her first court appearance since her arrest last summer https://t.co/dBW3Q1w3a2

One of the survivors, Virginia Giuffre, who has been vocal about Maxwell and Epstein's crimes on his private island in the Bahamas, claimed to be on the island at the same time as the ex-president Clinton. But he denies ever visiting the place, reports the New York Post. The Florida mansion where he allegedly raped hundreds of girls and women was demolished last week.

Giuffre said she was trafficked to London by Epstein in 2001. She said, Prince Andrew "should be panicking" following the arrest of Ghislaine Maxwell last year. "Prince Andrew should be panicking at the moment because Ghislaine doesn't really care about anyone else but Ghislaine," Giuffre told 60 Minutes. "I think he would be quite shook up. This day to me has been like one of the best days of my life. I have not stopped smiling and crying, happy tears and I'm just elated to know she is where she belongs," she shared.

"She ruined so many lives. She belongs in jail. You want to hurt kids? That's where you go. There were so many women in Epstein's organization that participated, who procured and who benefited from his sickness," she continued."I think Jeffrey was dirty, was sick. He was a pedophile. Ghislaine, she is the wicked one, and these women with her, they deserve the same punishment. They should be taken down as well."