Is It Safe To Keep Hand Sanitizers In Your Car? Experts Explain

Hand sanitizer contains alcohol and is definitely inflammable under certain conditions, but is it enough to start a car fire on a hot day? 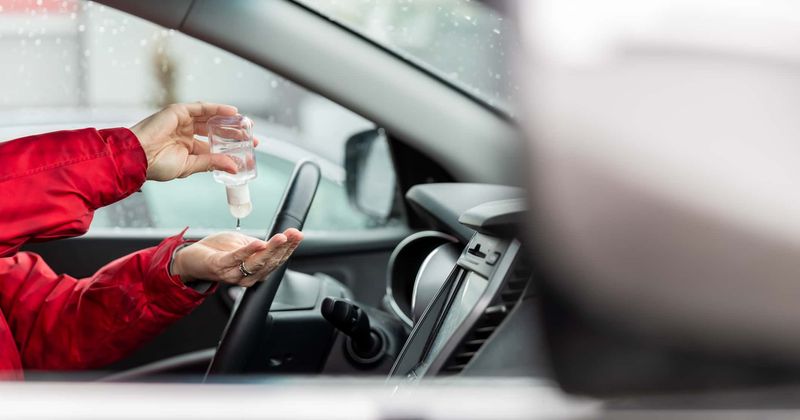 A fire department from Wisconsin took to Facebook earlier this week and made a post warning people about the dangers of leaving hand sanitizer in their vehicles on a hot day. Now this followed a series of requests done both offline and online where people began to raise several questions regarding the same. As we know, the advent of the coronavirus pandemic resulted in a massive explosion of hand sanitizer purchases and it was only likely that several FAQs on the subject would follow suit. In a now-deleted Facebook post, the Western Lakes Fire District showed a burned car door and explained the dangers associated with hand sanitizer.

“By its nature, most hand sanitizer is alcohol-based and therefore flammable. Keeping it in your car during hot weather, exposing it to the sun causing magnification of light through the bottle, and particularly being next to open flame while smoking in vehicles or grilling while enjoying this weekend can lead to disaster,” the fire department wrote.

“Additionally, there is a potential fire risk to storing hand sanitizer in your car. In extreme heat, it can ignite due to its high alcohol content.” https://t.co/xH123NAhlN

An official from the fire department stated that the image they shared was allegedly taken in Brazil. During that particular incident, the hand sanitizer apparently contacted open flame. The department is henceforth encouraging people “to simply be careful and realize that a product we all use very frequently can be dangerous if it contacts open flame of any kind, but specifically cigarettes or those from grills.”

This obviously leads us to a bigger question altogether—will hand sanitizer really and always combust in a hot car? While it is true that hand sanitizer does contain alcohol and can easily ignite when near an open flame, fact-checkers did add more info to the question. Poynter said that teams of information verifiers in Brazil went on to conclude that the temperature inside a car must reach at least a whopping 572°F for a bottle of hand sanitizer to combust.

OMG! Is hand sanitizer still effective if you leave it in your car in the heat? #handsanitizer #sanitization https://t.co/yYNEsWciq5

A 2007 study of hand sanitizer used in hospitals by theWorld Health Organization revealed no reports of “fire caused by static electricity or other factors were received, nor were any related to storage areas.” Additionally, as per the National Fire Protection Association (NFPA), hand sanitizer would have to be exposed to extreme heats (over 700°F) in order to spontaneously combust.

I think is a great example of how urban myths become facts in today’s news media- most of the MDs memo was about the effectiveness of hand sanitizer left out in the heat as the alcohol evaporated and a side mention of the flame which became the story https://t.co/whrY46N0EF

The NFPA stated: “Spontaneous ignition would be an ignition source independent of a flame or a spark, [and] it requires a material that is reactive to do what’s called self-heat,” Colonna says in a new video interview on the topic (above). “Internally, it undergoes a reaction and changes its properties, and when changing its properties, it releases lots of heat energy. Hand sanitizer, the alcohol [in it], is a material not inclined to do that. … The ignition temperature of the alcohol is going to be something in excess of 700 degrees Fahrenheit.”

Fact Check: Despite #CBC stories, hand sanitizer will NOT auto-ignite in your car per #NFPA. These articles confuse flashpoint and ignition temperature and is an example of #stayinginyourlane and why non-firefighters should avoid fire safety advice: https://t.co/fBWJtqdc2z

Snopes, the popular fact-checking and myth-busting website, does note that keeping a small bottle of hand sanitizer in your car won’t result in spontaneous combustion. However, they also add that cautious drivers may want to store their hand sanitizer out of direct sunlight, in their glove boxes or center consoles. Meanwhile, Guy Colonna, the director of NFPA’s engineering technical services says that puts the flashpoint at basically room temperature. This means that no more added heat is required for those flammable vapors to be given off.

#FactCheck "You probably shouldn't keep hand sanitizer in your car because hot temps could cause the product to lose its effectiveness" #coronavirus #CoronavirusPandemic https://t.co/OgdDTgatuK

“Once those vapors concentrated in those right proportions of fuel vapors with the oxygen in the air, then the only thing that’s missing in order to make them ignitable is a viable ignition source,” he said, according to KSL News radio. Regardless of the seemingly conflicting statements by fact-checkers and several media sources, it is advised to not keep your hand sanitizer in places subject to extreme heat.

Our goal in the WLFD   is to provide timely, accurate, and educational information while responding to the needs of our...

Posted by Western Lakes Fire District on Thursday, May 21, 2020

The Western Lakes Fire District later added an update to their original post after this subject became a topic of debate on the internet. They informed people that they did not mean to instigate fear by showing the photo of the burned door. Their message was intended to raise awareness on preventing fires and injuries from the use of hand sanitizer. The department specified that they did not claim that the picture of the burned door came from an explosion of a hand sanitizer bottle, and was rather the result of the inflammable liquid coming into contact with an open flame.