She's going to turn 71 next month! 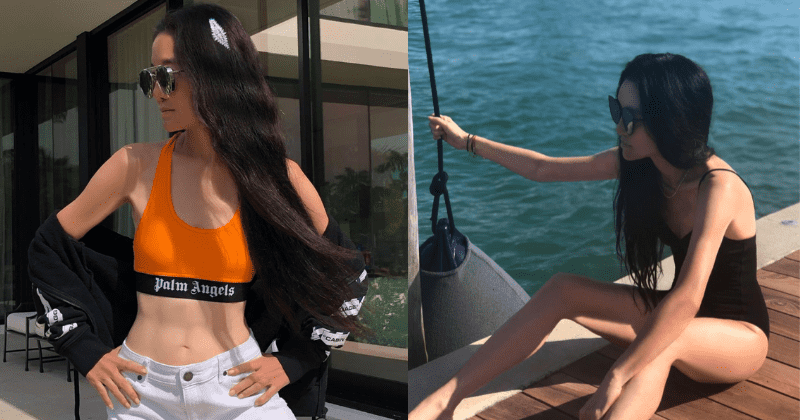 Vera Wang's spectacularly toned abs have gone viral after a fan asked, slack-jawed: THIS B - - CH VERA WANG IS 70?!?! in a tweet on May 6. Since then, the tweet has garnered 38.9K retweets and 257.1K likes. What's more, the fashion designer even responded! Wang simply stated: Fact Check: Truth. Wang’s recent Instagram posts have been catching a lot of attention lately. According to The New York Post, she has been posting pictures of her body-baring, high-fashion looks while quarantining at her Miami home.

The most popular picture is the one where she's posing in a leggy gown by the pool wearing a sports bra, and getting some sun in a sleek, black maillot. Unsurprisingly, a lot of people were curious to know the secret behind Wang's immortality. "I need my stomach to be like yours. What’s your routine?" asked a woman named Rosalee. Wang replied, "Work, sleep, a vodka cocktail, not much sun." One may think that Wang hits the gym every day to look young but she’s been open about her distaste for exercise. Despite being an athlete, she's competed at the 1968 US Figure Skating Championships.

Another photograph on Instagram shows the designer posing next to a treadmill in stylish Adidas leggings, a thick gold chain, and white heels. She captioned it: This photo depicts my personal conflict between loving athleisure clothing but dreading the treadmill! She's even posted pictures of doughnuts, pizza, and cheesy snacks. If that's a part of her beauty routine, count us in!

According to Harper's Bazaar, Wang's moderate weight-lifting and cycling keeps her feeling fit. Diet-wise, she ensures to "never miss a meal; I have to feed my brain." However, her healthy diet isn't limited to the same nutritious meal every day. In fact, she prefers to switch it up, saying,  "I go through phases with what I eat for lunch: I like sashimi with brown rice and vegetables, Chinese steamed broccoli with chicken and rice, or the artichoke salad or fish from Sant Ambroeus." But she does enjoy the occasional treats. "We have a candy pantry, a cereal pantry, and a pantry for what I call 'orange food'—Cheetos, Pepperidge Farm Goldfish, all kinds of chips."

Speaking to BAZAAR.com for #BazaarHopeatHome, Wang opened up about exercising while being quarantined with her "fashion family" in Miami. "If you are lucky enough to be with a group of people you know so well and have traveled with so extensively, being restricted can bring so many positive and different nuances to the experience. All of them are extremely fit, which pushed me to 'work out' most days," she admitted. "But on another level, the fact we could speak about life, love, work, priorities, family, even fears made each day a new experience. Forcing ourselves to celebrate each life event from birthdays, anniversaries, holidays such as Easter, even births, and sadly, illnesses, helped me to see the need to treasure these milestones no matter what."

Wang is known for designing lavish red carpet gowns and brides’ dream wedding dresses, but did you know that she's been creating costumes worn by figure skating’s most iconic competitors at the Olympic Games for the past 20 years. "It’s not for the faint of heart," she told PEOPLE in an interview for its special issue The Best of Olympic Figure Skating. "If one strap were to break, or if the beading on the sleeve gets caught when they turn, their whole Olympics is over. That is how serious it is. It’s absolutely nightmarish!"

Wang herself was a figure skater before getting into fashion, so she seemed perfect for the job. "I understand the physics," she said. "I think people are fooled by the nature of the costumes and the ease and the musicality and the choreography. It is an extreme sport." She was even inducted into the US Figure Skating Hall of Fame for her contributions.

From figure skating to bridal design, learn more about Vera Wang's journey into fashion and beyond: https://t.co/vDi3GRASyi pic.twitter.com/XTqk9ADl24

Twitter continues to have a lot of reactions to Wang's agelessness. Here are some of the best reactions:

Y’all out here talking about Paul Rudd and Jennifer Anniston not aging,,, this bitch Vera Wang is 70!!!! She is SLAYING like what????? pic.twitter.com/ydMQbt1E4g

vera wang at 70 vs me at 21 pic.twitter.com/YGNrJAqQ9O

Life goals: Look like JLo at 50 and Vera Wang at 70. I need both meal plans STAT pic.twitter.com/v6GqyCdtNi

Miss Wang said it’s over for us youngins pic.twitter.com/BPi3E9fpmP

Even I am jealous of @VeraWang. And I literally do not age. https://t.co/R2XOvEXD9O

Nah I’m no buying it 😱 how the heck can Vera Wang be 70.... I’m Literally less than half her age and I’ve spent most of quarantine in my dressing gown, complete with grey hairs looking like someone’s granny 👵🏼 🤦🏻‍♀️ #VeraWang #whatsyoursecret pic.twitter.com/4t7lUGC2Nj