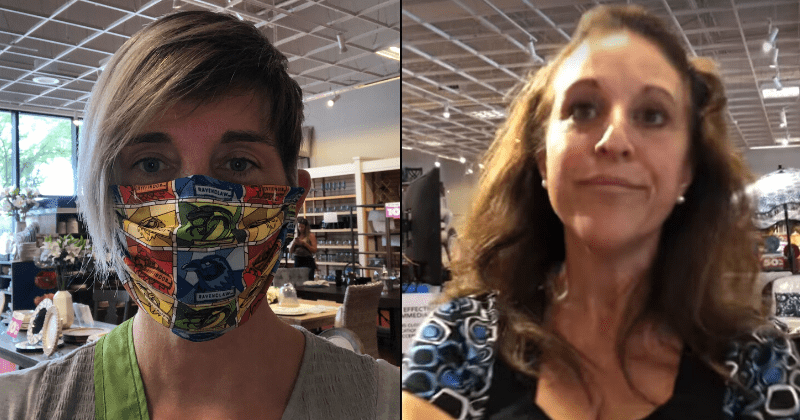 A woman at a store in Jacksonville, Florida who had been harassing the staff there with her tantrums, deliberately coughed on a woman suffering from brain tumor who was capturing her vile behavior. The video was filmed by a woman named Heather Reed Sprague and posted on her Facebook page.

The 'Karen' is seen standing near the payment counter of the store with her hands folded haughtily. She then notices Sprague and turns her attention towards her. She says in the video,  "Do you really need this. What do you want to do, post it...?" She then shows her middle finger and says, "How about that?" The woman then says, "I think I'll get real close to you and cough on you then" and proceeds towards Spraque, gets very close, and lets out deliberate coughs. One can hear Sprague retort by saying "A**hole" but it is very faint.

Who are these nasty people?.. Please... someone must know who she is... coughing on someone during the coronavirus pandemic should be a crime! pic.twitter.com/kNyjWaQsJ6 #Resist #coronavirus #COVIDIOTS #coughingkaren

From the back, one can hear someone saying, "Oh! No! No way" - probably shocked at the actions of the woman at a time when the coronavirus is spreading all around the state. Soon after this, the woman walks out. A little girl can also be seen in the video. She says nothing and just follows the woman outside when she said,  "Let's go."

According to Sprague, the girl was the woman's daughter. Another child, a little boy, also accompanied the woman to the store but both were left "unattended" most of the time during her time at the store. The incident took place on June 25 and was posted a day later.  Explaining the events that lead to the video, Sprague wrote: "Yesterday I learned firsthand the power of conscientious bystanders. It took 30 seconds to end 15 minutes of aggressive harassment."

She added, "I’m a mother of ten, and currently a brain tumor patient at Mayo Clinic. Obviously, I don’t get out much right now. I had an appointment in the Town Center area, so I donned my mask and ducked into a store to escape the heat while I waited for my appointment time. There were two small children wandering around the store unattended for an extended period, and the little guy was doing the potty dance."

Sprague said she soon realized these were children of the woman who was at the register. The woman "was becoming increasingly belligerent" and was "screaming at, swearing, insulting, and threatening the staff as she demanded to return an item she didn’t have with her, just a photo of the item on her phone. The staff were professional and respectful. But they couldn’t return an item she didn’t actually have with her."

She added, "She continued to rage, all the while her poor little boy was squirming and asking for a bathroom, which she would have needed to leave the store to find. When she positioned herself so the clerks couldn’t exit the checkout area and screamed that she would stay right there, yelling as loud as she wanted, until all their customers left... I stood at a distance, pulled out my phone, and wordlessly began filming. She immediately turned her attention away from the staff to me. The video tells the rest of the story."

Since being uploaded, the clip has been viewed over 1.6 million times as on Monday and with 12,000 shares, over 6,000 likes and hundreds of comments. Sprague continued, "I did not speak, react, or engage. Simply stood to document the behavior. When bullies are faced with accountability they must acknowledge the unacceptability of their actions."

Assault with a DEADLY WEAPON! She should be charged ! She the definition of pic.twitter.com/joUqH36Ae9

"Within 30 seconds of filming her tirade was done and she left the poor staff in peace," said Sprague while adding sarcastically, "And hopefully her sweet boy got to find a potty."

Obviously needing  to get herself tested after the incident, Sprague ended her post writing:  "I’m off to find a Covid test, thanks Karen*cough, cough (sic)."