The incident took place in Boyton Beach and was recorded by a local resident who then informed the police. 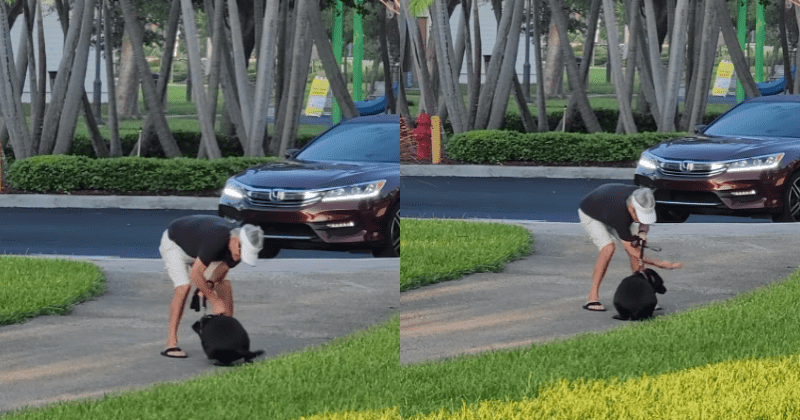 Trigger Warning: The story has a video and details of animal cruelty that readers may find disturbing

A disturbing video of a dog being hit by its owner in Boyton Beach, Florida has been circulating online, prompting the authorities to act. The video was taken by a woman named Stacey Rybak, who had been out walking her dog on Sunday in her neighborhood when she saw the dog run towards a gate near her. She said to KLTV, “The dog was jumping up, wanting to come in." Some moment later, a man pulled up to the driveway and called out the dog by its name, before approaching the animal. Rybak revealed, “The owner bent down and grabbed the harness and just started to beat the dog. I still have a hard time talking about it.” She managed to take a video of the assault, filming the man reaching down, pulling the dog's leash, and hitting the animal on its head many times as it cowered in fright. Rybak called the Boyton Beach Police, who opened a case of animal cruelty.

Rybak also posted the video online where it circulated rapidly and sparked outrage, with people asking for the owner to be punished as soon as possible. In a Facebook post three days ago, Rybak said she thought it was a lost dog at the park next door while adding, "The dog was reluctant to go to the man." A neighbor of the dog's owner identified the animal online and said its name was Addison or Adi. Authorities soon identified the assaulter and owner of the dog. Adi was swiftly separated from her owner. According to a report on WPTV, no charges were filed against him and he has not been identified as a result. Addison is a 2-year-old female pit bull-lab who is presently under the care of Palm Beach County Animal Care and Control. She was also examined by a vet soon after being removed from the owner's house.

Yes, the good news is Addison is safe; the bad news is that "no charges" were filed
We expect to not see Addi returned to her abuser, but nothing is guaranteed.:(
Please follow rdrnyc for updates on Adi.

Liz Roehrich, the Boynton Beach animal cruelty investigator, said, "I will do my absolute best to pursue justice for this innocent animal. We will always investigate acts of animal abuse and neglect in the city." In a post on Tuesday, the Boyton Beach Police wrote that the owner had "permanently relinquished custody" of the dog after they did a welfare check on his home. "Inv. Liz Roehrich said the man expressed extreme remorse and said he understands the gravity of his actions. She also said that two other dogs in the home, ages 11 and 13, appeared to have been well taken care of, and based on her observations, there is no probable cause to remove them," the post highlighted. About Adi, Roehrich stated in the post, she can "now look forward to finding a forever home filled with love and gentle hands.”

All inquiries into Addison’s status and availability for adoption have been directed to Palm Beach County Animal Care and Control. The criminal investigation into the case is still going on. In an earlier post, the police pointed out that the incident had taken place near the Intracoastal Park and an officer was immediately dispatched to investigate the case. It was then turned over to the animal investigator. Roehrich interviewed the dog's owner that same day. The police department and all involved in the quick solving of the case came for a lot of praise from the public. Valerie Rye Riscoe commented on the Boyton Beach Police post and wrote: Boynton Beach Police Dept. really came through quickly for this sweet girl. Thank you for removing her from his vicious behavior. Please continue to monitor the other animals in his possession.

Another concerned citizen, Jodi Moro Skougor stated: Thank you so much BBPD! I’ve been so upset since yesterday watching it and sharing so that this poor dog can be saved from this monster. I saw that @muttypaws offered to step up. They are a great rescue.