A representative for Mayweather later revealed that he didn't take a picture because he was in a rush to leave the game. However, the teenager continued to claim that Floyd's actions were homophobic. 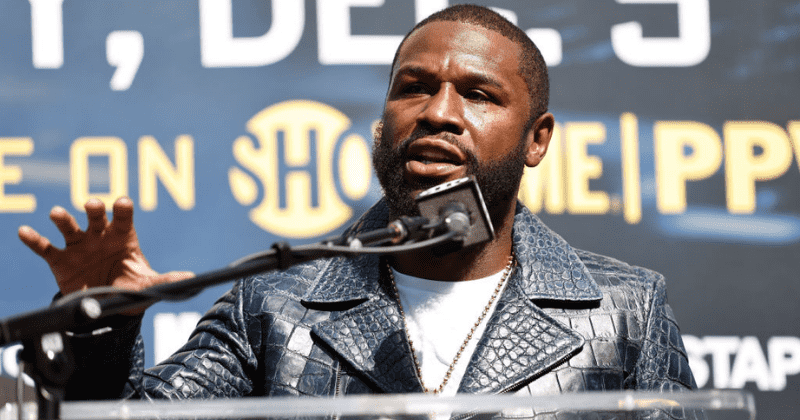 Floyd Mayweather has found himself in hot water after reportedly refusing to take a selfie with a male fan as the teenager had painted fingernails. The incident took place on Saturday at the Staples Center in Los Angeles where NBA teams LA Clippers and the Memphis Grizzlies clashed. According to TMZ, the fan hopped the court hoping to get a snap with Floyd at the end of the game but to their dismay, they were immediately shut down by the retired boxer before his bodyguards escorted him away. In video footage of the incident, which was recorded by the teen, Mayweather can be heard saying, "You got painted nails, I don't take pictures with guys with no painted nails."

His bodyguards quickly guide the fan to back up while Mayweather walks away. Upset with the interaction, the fan is heard saying, "Floyd doesn't want to take a picture with me because my nails are painted. Bruh, really?!" A representative for Mayweather later revealed that he didn't take a picture because he was in a rush to leave the game. However, the teenager continued to claim that Floyd's actions were homophobic even as the 44-year-old explained that couldn't be further from the truth. According to witnesses' reports, it seems as though the undefeated champion did make an exception for the teenager.

Floyd Mayweather allegedly refused to take a picture with a fan because he had his finger nails painted.👀 pic.twitter.com/fM3oUBNTYb

Attendees told TMZ that Mayweather had been clicking pictures with others during the game but when it came to the teen fan, he shot him down. This did not sit well with the Twitterverse as people criticized him for refusing to take a photo solely based on his appearance. "Just saw the Floyd Mayweather video. I don’t follow him, boxing or whatever he’s doing but it’s no surprise to me that he’s a homophobic piece of trash! How do you refuse to take a picture with a guy because his nails are painted?! What a trash bag!" wrote one. Another noted, "This guy has always been his own worst enemy. Since he was one of the greatest of all time, he should be loved by most. But, he's not." A third chimed in, "I have lost respect...I used to look up to him but now....I'm disgusted that is wrong af."

That being said, there were many who spoke in support of the boxer. User Rio shared, "Who cares. this is a place where Hollywood can cast an all-white cast with zero black people. A person can question if it's a black Person's fault for getting shot in the back because they fit the description. education is based on imaginary racial lines. But painted nails though." Another wrote, "Floyd’s entitled to like or dislike whatever he wants. "Why would a boy paint his nails? I wouldn't get a picture with that boy too," asked Henry Chitaika, unaware that men these days paint their nails irrespective of their sexuality. Just take Harry Styles, Post Malone, Lil Yachty, MGK, and A$AP Rocky for sexuality.

Everyone in the comments are stereotyping that painted nails = gay. Painted nails has nothing to do with being gay.

You all are more homophobic than Floyd Mayweather.

Back in 2017, the former five-weight boxing world champion directed a homophobic slur at Conor McGregor, who he accused of making a racist comment while promoting their Las Vegas fight. "He called black people 'monkeys,'" he said according to BBC. When the duo entered the boxing ring that year for their official promotion, Mayweather chose some offensive words to get back at the UFC lightweight title-holder. "You punk. You faggot. You ho," he said. What's more, there was a sexist and homophobic language used constantly throughout the fight.