Oldest Known Human Footprints In North America Have Been Found

After carbon dating the seeds embedded in the footprints, the U.S. Geological Survey estimated that the prints were up to 23,000 years old. 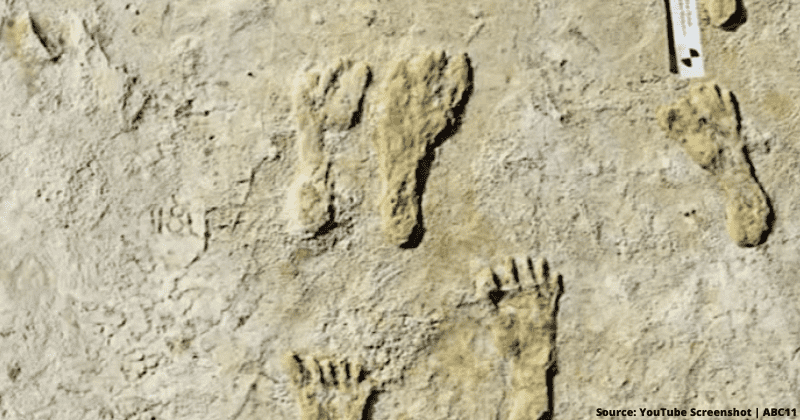 The oldest known human footprints in North America have been found at White Sands National Park in New Mexico, revealed the U.S. Geological Survey (USGS) on Thursday. Scientists made the discovery while conducting research. The findings published in the journal Science reported that approximately 60 fossilized footprints were buried in layers of gypsum soil on a large playa in the Tularosa Basin. "These incredible discoveries illustrate that White Sands National Park is not only a world-class destination for recreation but is also a wonderful scientific laboratory that has yielded groundbreaking, fundamental research," noted USGS Superintendent Marie Sauter in a news release.

After carbon dating the seeds embedded in the footprints, the U.S. Geological Survey estimated that the prints were up to 23,000 years old, reports USA TODAY. Researchers believe that humans possibly traveled from Asia into the Americas 26,000 to 19,000 years ago (i.e. during the last ice age) via the connecting land, which is now Alaska and Russia. It is speculated that after this move they settled in a region which is now mostly submerged called Beringia after finding that their way south had been blocked by glaciers.

This exciting discovery could boost existing theories of how human beings came to populate the American continent and the time frame when it happened. Research conducted over recent decades suggested that people reached the North American continent by boat at least 16,000 years ago. And before this, archaeologists presumed that the first human arrivals walked through a corridor created between glaciers around 13,500 years ago.

If the carbon dating of the latest discovery in New Mexico is accurate, it established the strongest yet evidence of how humans reached America thousands of years ago. Per The Hill, the USGS said the findings helped them establish that the oldest known presence of humans in North America happened "thousands of years earlier than previously thought." The paper also stated that eventually advancing glaciers closed migration routes from Asia. U.S. Geological Survey Acting Rocky Mountain Regional Director Allison Shipp added, "This study demonstrates the process of science — new evidence can shift long-held paradigms."

Research teams that made the discovery were inclusive of scientists from White Sands National Park, the U.S. Geological Survey, the National Park Service, Bournemouth University, University of Arizona, and Cornell University which was in consultation with the park’s Native American partners. However, a Las Cruces-based geomorphologist, David Rachal, who was not involved in the research previously warned about the geology of White Sands and the bed of Paleolake Otero being dynamic in a research paper published in April. The dynamic landscape in turn makes it difficult to accurately date the soil.

Over the years, layers of sediment-bearing trackways made by humans and large ice age animals, or megafauna, have continuously eroded, shifted, and have been left the layers exposed over time. Moreover, the lake itself has risen and fallen and as for the shoreline it has shifted as well. Following the report of the discovery, Rachal explained that the dynamics make accurate dating of the specific tracks quite tricky because footprints that have occurred thousands of years apart might be superimposed over time. But he did laud the team's effort and work before providing a note of caution saying these findings characterize other trackways at the site.

"You can’t dispute the dates, the prints are amazing, everything lines up, it’s perfect," he said, adding that the team was researching an area that has superior conditions for trackway preservation. "The only thing I’m concerned about is that it’s not that clean of a landscape," he said. Furthermore, he warned that the landscape at White Sands “has experienced a tremendous amount of geologic change over a short timeframe and you need to interpret these tracks that are exposed in a surface context, as a dynamic landscape."