trending celebrity people lifestyle news animals
Delivery Woman Walks Away With Customer's Food After Getting $8 Tip, She Said She Drove 40 Minutes To Get There

Delivery Woman Walks Away With Customer's Food After Getting $8 Tip, She Said She Drove 40 Minutes To Get There

This DoorDash driver claimed that she had driven for 40 minutes to get to the customer's location. 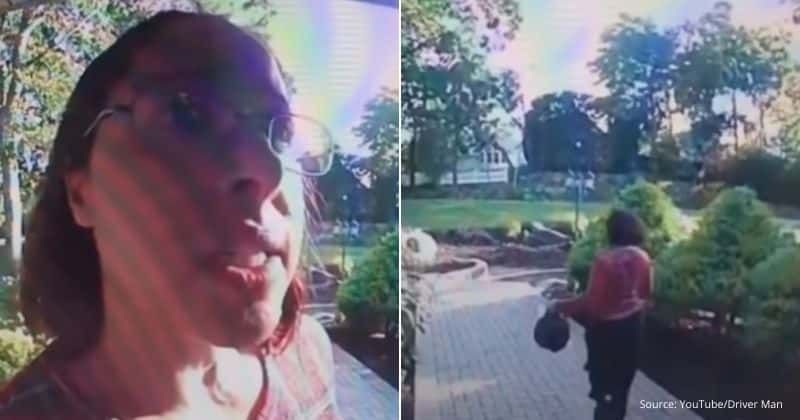 A DoorDash driver refused to deliver food to a Long Island customer because she wasn't impressed with the $8 tip he left. In the footage captured on a Ring doorbell camera outside a home in Smithtown, a confrontation took place between the driver and the customer as she goes on to accuse the man of stiffing her. "I need to speak to you. I don't think you realize where they're coming from, so I need to speak to you," the driver was heard saying in a video posted on YouTube reports New York Post. "I don't think you realize the distance that it's coming from, because then you would never actually have given what you gave. So I think you can come and see me face-to-face."

A karmic experience & warning to both people involved

The woman had picked up the order from a neighboring town called Commack, which was around 12.5 miles from the location. "Do you realize how far it is? Do you realize you ordered from Commack and you’re in Smithtown?” the woman questioned. Then the customer argued that the distance could be covered through a 15-20 minute drive but the woman stood her ground and justified herself. "...'cause I drove 40 minutes, I drove 40 minutes and I got it to you early, so I don't think you realize where you got it from. I just drove it, it’s 40 minutes. It’s 12½ miles," she responded.  The customer then asked why she took on the delivery to which the driver said she had no idea how far the delivery was because the app didn't reveal the total distance she had to cover. The driver then asked the customer to "make it right" by adjusting the tip and that the $8 he left was not enough. "What the hell are you looking for?! I gave an $8 tip!”, the man retorts, puzzled by the bizarre exchange. Frustrated by the ordeal, the woman picks up the food and proceeds to walk away from the door, as the man yells out, "Are you f**king kidding?"

According to The Real, the incident believed to have taken place in August 2020. So far, it has generated close to 700k views and over 5k comments with DoorDash customers and drivers who shared their experiences. Dan Mortenson, a man who seems to have worked in the restaurant industry, quipped: "This woman has never worked for tips before. Eight dollars is a Home Run." But another user rebuked his statement and said the tip was not justified "for a 40-minute drive" before noting that it possibly couldn't have been a 40-minute drive unless "she drove [at] 5 mph," Another DoorDash driver added: "As a door dash driver, an 8 dollar tip is good money!! I can’t believe she took the food back." A third claimed that the woman was entitled: "She’s definitely a Karen 100%," he wrote.

Door dash driver is a lier. Have been a driver in at least 7-8 different states over the past 2+ years and every single time it shows in the little map exactly where I’m going before having to accept the order.

They should have gotten paid even more by doordash

Yet another user who said he was "all for tipping well" summarised the situation using math and logic based on the video. "An $8 tip is 20% of $40 and that bag didn’t even look like $40 worth of food???", he wrote. "Also, the guy had literally already paid for the food so I hope she gets charged for theft." However, when the outlet reached out to DoorDash for a comment, the company responded that it wasn't aware of the incident.

This is why I do not use @Doordash.

The company isn't releasing any comment on this driver either compounding the matter.https://t.co/lFaiH96YDi

As per Google maps, the quickest way from Commack to Smithtown is 5.5 miles and takes roughly 12 minutes (not including traffic), and its believed, according to TooFab, that DoorDash does inform its driver about the distance needed to be covered before they accept the delivery.