The Flying V, named after the Gibson guitar, did a successful test flight onits 1/20 scale model. 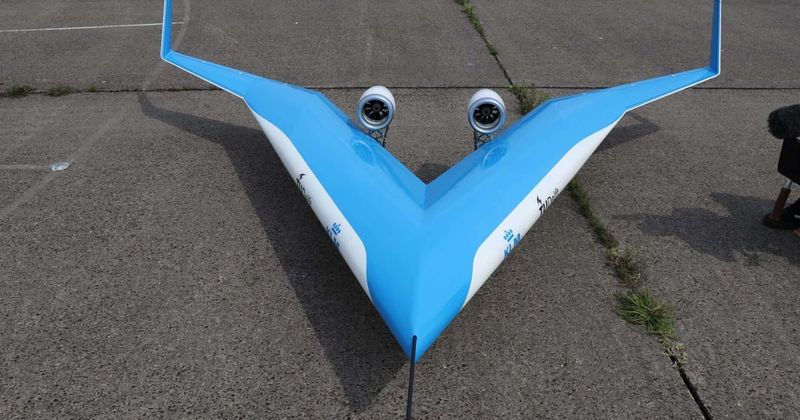 The "Flying V" prototype airplane has officially had its first test flight at an airbase in Germany. According to reports, engineers managed the first maiden flight on the 1/20 scale model named after Gibson's famous electric guitar. Developed by Delft Technology University, the scale model, which is 10 foot wide and weighs 50 pounds, successfully went airborne at a secret airbase, reports Fox News. The scaled-up version designed for commercial flights will carry up to 314 passengers, with some passengers set to be housed under its wings. Another key feature of this futuristic aircraft is that it consumes 20% less fuel.

The craft's wings stretch diagonally from the nose to form a visible V which is set to hold the passenger cabin, fuel tanks, and cargo holds. The unique yet bizarre design means that passengers looking out the window will be able to see the other half of the plane. Meanwhile, the test flight involved the remote pilot successfully taking off and flying a few test maneuvers, before approaching for a landing just as the batteries were about to run out. According to Daily Mail, Dr. Roelof Vos, the project leader, said: "One of our worries was that the aircraft might have some difficulty lifting-off since previous calculations had shown that rotation could be an issue. The team optimized the scaled flight model to prevent the issue but the proof of the pudding is in the eating. You need to fly to know for sure."

The test flight came after wind tunnel testing and a host of ground tests had been conducted in the Netherland. The result found that the current design shows too much Dutch roll, making it wobble on either side which could cause a bit of a rough landing. The engineers will now use the data collected from the flight to build an aerodynamic software model of the aircraft which will enable the flight to be included in flight simulator programs for the future, where further research and test flights will be conducted. As per the team, rotation on take-off where the nose pointed upwards was performed easily at a speed of 50 miles per hour.

For the first time, a scale #model of the #Flying-V, an experimental #jetliner that seats passengers inside its #wings, took #flight during an uncrewed #test.#tech #technews #technology #airplane #firsttime #engineering #engineers #wing https://t.co/htb39KMups

TU Delft also issued a statement on the promising flight and said: "The plane’s thrust was good and flight speeds and angles were as predicted." The next step in the process would be to build a commercial version of the plane, which will have a width of 215 feet and a length of 180 feet. The flight will be powered by a couple of turbofan jet engines, which is a mix of a gas turbine engine and a fan to accelerate air, set to be mounted at its rear. Various calculations have also noted that the new aerodynamically aircraft will not only reduce weight but also decrease fuel consumption by 20% when compared to state-of-the-art models like the Airbus A350-900 seen currently. The design is also expected to reduce the carbon footprint of long-distance air travel and also the cost of fuel. In terms of fuel, the aircraft is expected to burn liquid hydrogen rather than kerosene, which puts out pollutants like nitrogen oxide, carbon dioxide, and soot into the air.

This is wild I would want to fly in a Flying V airplane if I also get a Flying V guitar that is @DaveMustaine’s @DeanGuitars #rustinpeace or United abomination models https://t.co/fwimca1A2E

The aircraft is one of TU Delft's attempts to making aviation more sustainable. Speaking of the project, Dean Faculty of aerospace engineering, Professor Henri Werij, said: "Ultimately, we have to fly entirely on sustainable energy. CO2-neutral. If CO2 is still released during the flight, for example, because we then fly on synthetic kerosene, the same amount of CO2 will be used to produce those fuels. At the Delft University of Technology, we are investigating how we are going to achieve this. For example, we are investigating new forms of propulsion, such as electric and electric hybrid, the climate impact of aviation and air traffic operations, such as airports." The Flying V still has years of research and development to undergo and is likely to hit the commercial market by 2040 or 2050, per NBC News.