This happened when Wolfgang's parents told him that he could only have a limited number of friends coming over for his birthday due to the coronavirus pandemic. 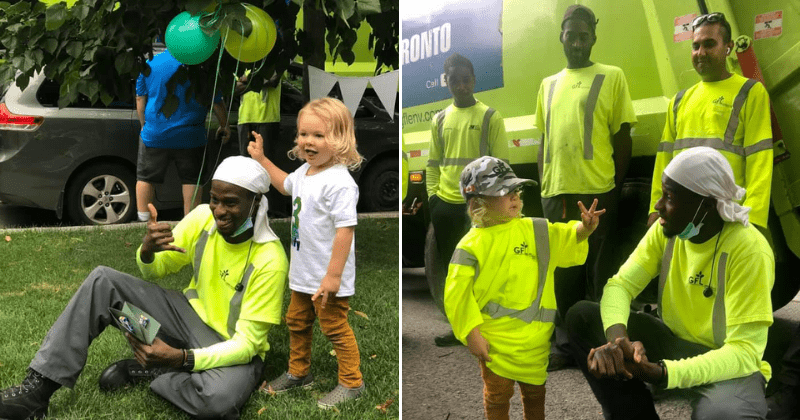 A group of garbage truck drivers made one particular toddler's third birthday a celebration that was nothing short of extra-special! They paid him a visit on his big day and did something truly amazing to commemorate it. Wolfgang Reader loves garbage trucks, and every Friday, he patiently waits for his neighborhood garbage workers, Drew and DJ, to arrive at his street. It so happened that Wolfgang's parents had told him that he could only have a limited amount of visitors and friends due to the coronavirus pandemic. So the toddler quickly formed his "wolfpack" with Drew and DJ, who are essential workers during this time.

Every week, this 3-yr old Toronto boy used to wait for the garbage truck.

He'd run out, bring his own toy truck, and talk with the workers.

On his birthday, he was sad because he couldn't have friends over — so they gave him the surprise of a lifetime.pic.twitter.com/ZMLfQpeToP

As his mom, Julia Wehkamp, shared in a post on Facebook from September 9, “[Drew and DJ] always take time to chat to him and check out his latest toy garbage truck ... have the occasional popsicle and happy dance to follow.” September 9th would mark Wolfgang's third birthday and this year, his parents informed him that he would need to keep the party as small and limited as possible. Just one or two friends who could come over for cake. “Without hesitation, he said ‘Drew and DJ,’” Wehkamp wrote. “We laughed it off, especially knowing his birthday is on a Wednesday.”

For 3 yr old Wolfgang Reader, the arrival of the neighbourhood garbage workers every Friday is an exciting time. The day of Wolfgang’s birthday, four garbage trucks came down the street blaring their horns. Check this week's Bright Spot!

"Unfortunately, DJ is on vacation, but Drew arrived with a crew driving four trucks blaring their horns up our street! Wolfy was speechless. The boys came bearing gifts, howling out their windows, and took time to play with Wolfy. He even got to honk the horn! Does it get any better!? Mad respect to the solid crew at GFL Environmental, all the essential workers during this difficult time and to the kind souls who took their own personal time to make a little kid smile." the mother's Facebook post added.

The little boy's grandma also helped in making this birthday his best one yet! According to local reports, the grandmother had written a letter to the city of Toronto, which stated that her grandson is "obsessed" with garbage trucks. She then requested Drew and DJ to come over for his birthday party at the house. For three weeks, the family heard nothing since sending the letter, but then on the big day, Drew and DJ’s supervisor dropped by. They told them that a garbage truck would be stopping by for the special day. “All of a sudden, the noise started and you saw coming down the street four garbage trucks blaring their horns,” Wehkamp said.

Every Friday, Wolfgang used to wait for the garbage truck: He runs out, brings his own toys, and talks to the workers.

On his 3rd birthday, he couldn't have friends over due to the pandemic — so they gave him a surprise he'll never forget. Heroes💛!! https://t.co/d1ah3P7Om1

“Guys are hanging out the window, screaming. And they pulled up out front and all the guys got out,” Wehkamp continued. “They brought him a whole bunch of presents and shirts that they wear and hats and coloring books. The whole nine yards.”  Wolfgang recognized Drew almost immediately after he got out of his truck. “They were here for a good half an hour, 45 minutes, just taking time out of their personal time to make a little boy happy,” Wehkamp added. “And he'll never forget it. Yeah, it was very cool."

“Solid guys, honestly, just the salt of the earth, and people I think we need right now in this world. I feel really blessed,” Wehkamp said.

Wolfy's quarantine birthday surprise ... gifts, music, and toy garbage trucks from Drew and DJ - the men who pick up the garbage on Wolfy's street every Friday. For his 3rd birthday, he could invite a friend or two for cake, without hesitation, he said “Drew and DJ”. 💚 pic.twitter.com/WSIgzt9gHt

“It means a lot,” Drew said. “It's the children, they're the next generation to come. Seeing them enthusiastic about even just something as simple as what we do in our everyday lives brings meaning and shows the importance of what everyone does in society. It just makes me feel good."