trending celebrity people lifestyle news animals
George Bush Sr. Was Carried By Secret Service To Be With His Wife On Her Deathbed

George Bush Sr. Was Carried By Secret Service To Be With His Wife On Her Deathbed

Jean Becker, Bush's former chief of staff for 25 years, released a memoir on time with the late president that has many such interesting stories 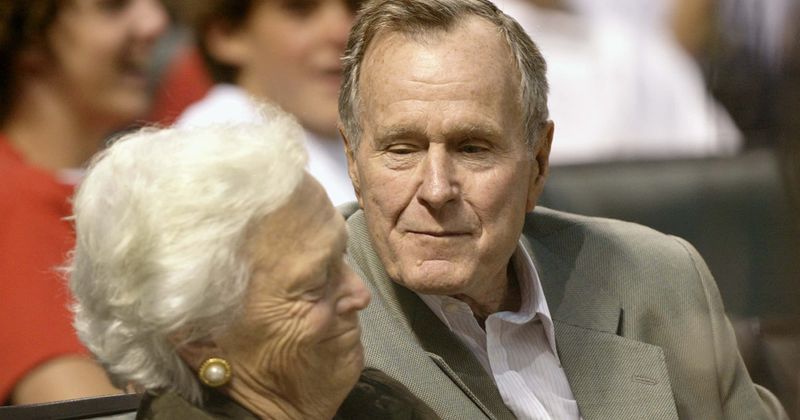 Just before his wife died, former President George H. W. Bush had to be carried to the second floor of their house by the secret service to see her. Barbara Bush had been unwell for a while before she died in April 2018. "The Bushes' power was out for three days the day Mrs. Bush died, which meant President Bush could not use the elevator to get to her second-floor bedroom. The Secret Service carried him up the stairs. The power came back on about the same time she passed," wrote Jean Becker, former chief of staff during the senior Bush's administration, in her new memoir of the late president. Barbara died her holding his hand, "which in itself had been a difficult feat," she wrote. "The Man I Knew: The Amazing Story of George H. W. Bush's Post-Presidency" has many such heartfelt stories and anecdotes surrounding the man reports PEOPLE.

Join us June 3 for our next Virtual Author Event! Jean Becker, Former Chief of Staff to 41, will join Max Angerholzer, CEO of @BushFdn, to discuss Becker's new book THE MAN I KNEW: The Amazing Story of George H.W. Bush's Post-Presidency.

Some days after her death, Bush also nearly died of sepsis. But he "rallied" and survived, although just for another five months. Despite 70 years together, the couple was "as in love" on the day he said goodbye to her as when they first met. Despite her illness, Barbara's "instinct was immediately to look into a mirror and pinch her cheeks so they had a little more color" when her husband was approaching, Becker wrote. Both complained to each other about their snores but when the writer suggested they sleep in separate rooms, "President Bush was appalled," she wrote and he told her, "Jean, I have to be able to reach out during the night and touch her and make sure she is there." Becker also wrote at length about Bush's relationship with Bill Clinton, who defeated him in the 1992 presidential elections. Becker wrote Bush became "the father Bill Clinton never had."

A marvelous book by friend and @GeorgeHWBush @BushFdn maestro Jean Becker:
The Man I Knew: The Amazing Story of George H. W. Bush's Post-Presidency by J... https://t.co/udqyCvH6MS via @amazon

Clinton's father died three months before his birth. Bush and Clinton came out as "best friends" after they set off on a tour to Southeast Asia in 2005 to access places that had been the hardest hit by the 2004 tsunami in the Indian Ocean. Becker wrote, "throughout the trip, President Clinton graciously waited for [Bush] and helped him up and down stairs, in and out of boats, planes, helicopters, and cars. Especially since the staff needed to stay out of the photos, it fell to President Clinton to give him his arm, which he did without being asked." On the other hand, Bush "treated the man who denied him a second term with great respect and kindness. And sometimes like a son. At times he scolded him, especially when President Clinton was running late or when President Bush worried he was maybe talking too much."

“I lost the election, my mother died, my dog died, and my boat crashed. There’s not much else left that can happen to me this year.”

—George H.W. Bush in 1993, as told by the wonderful Jean Becker in this excerpt from her new book, “The Man I Knew.”https://t.co/rLa9vMec2l

Becker told PEOPLE that Clinton "became very protective" and added, "It was interesting to watch the two of them. Mrs. Bush would tell you President Bush was the father President Clinton never had." Bush was also immensely proud that the family produced not one but two presidents. After his son George W. Bush's inauguration as president in 2001, Bush senior nearly cried as he walked into the Oval Office and saw his son sitting at the desk of the President of the United States signing papers. Becker wrote when junior Bush's chief of staff, Andy Card, walked in and addressed him as "Mr. President" it was senior Bush who "turned around prepared to answer when he realized Andy was talking to the President and not him." Some days before Bush died in November 2018, Barack Obama visited him and thanked him for his service.

The power of love:

Watch this clip of Jean Becker, longtime chief of staff to George H.W. Bush, tell the story of Barbara Bush’s final moments on this earth—with George holding her hand.https://t.co/d84JrE4E1w

Becker was at Bush's bedside when he died and held his hand. She said she coughed at one point in time while there. "He squeezed my hand and asked 'Are you okay?' Those would be the last words George Herbert Walker Bush would say to me," she wrote, while adding, it was "just so him. He was dying. But as always, he was thinking of the other guy."