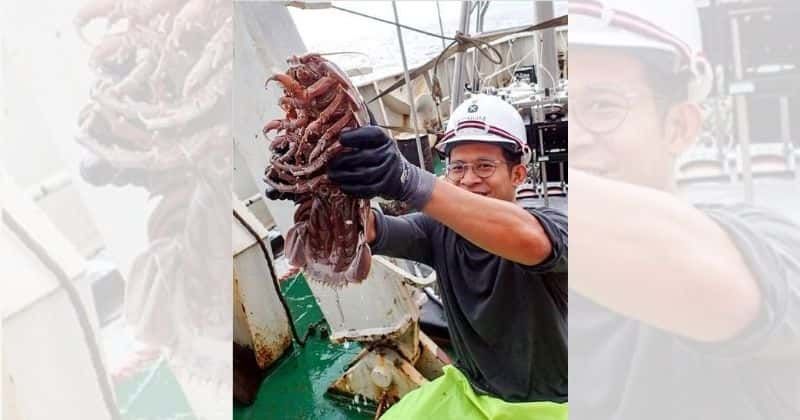 A team of researchers from Indonesia found a very peculiar looking and frightful creature during their 14-day expedition off the coast of West Java in Indonesia. Among the many deep-sea creatures that they found, one that resembled a gigantic cockroach stood out. Unsurprisingly, the pictures of it went viral, and some people referred to it as the "Darth Vader" of the sea. From a scientific point of view, this is only the second-largest isopod species to be discovered and has been named 'Bathynomus raksasa.' It is 20 inches (50 centimeters) long with 14-legs reports Daily Mail.

"Isopods are an order of marine invertebrates (animals without backbones) that belong to the greater crustacean group of animals, which includes crabs and shrimp. Scientists estimate that there are around 10,000 species of isopods (all belonging to the order “Isopoda”)" according to Ocean Explorer. While the species may resemble cockroaches, it is however more closely related to marine crustaceans like crabs and shrimp. "The discovery of new species is a great achievement for a taxonomist. especially spectacular species in terms of size and even the ecosystem where the species is found," said Cahyo Rahmadi of the Indonesian Institute of Sciences and one of the researchers involved in the project.

The team wrote about the new isopod in a scientific journal where they stated, "The giant isopod genus...is recorded for the first time in Indonesian waters, from deep waters off southern Java in the Indian Ocean. Bathynomus raksasa is characterized by the large size (averaging at 330 mm)..." The creature was discovered in 2018 but the finding was only revealed now. A total of 800 species of sea creatures were found during the expedition. These include species of crabs, jellyfish, fish, mollusks, prawns, sponges, starfish, urchins, and worms according to the Daily Mail. Of these, 12 have been previously unrecorded before. According to News24xx, Conni Margaretha Sidabalok, a researcher from LIPI Biology Research Center Researcher, stated: "Bathynomus is one of the icons of deep-sea crustaceans with relatively large size and distinctive overall appearance."

She also added that "Bathynomus has seven pairs of street legs and five pairs of swimming feet. In general, the giant Bathynomus is most similar to Bathynomus giganteus which is the biggest isopod so far." An Instagram post by the Lee Kong Chian Natural History Museum in Singapore stated: During an expedition, there are some animals which you find unexpectedly, while there are others that you hope to find. One of the animal that we hoped to find was a deep sea cockroach affectionately known as Darth Vader Isopod. The staff on our expedition team could not contain their excitement when they finally saw one, holding it triumphantly in the air!

In another post, the museum wrote: The enormous size and significance of the find inspired its name “raksasa”, which is the Indonesian ⁣word for giant.

It added: How big you ask? Averaging 33 centimetres, the giant isopod is around 20 times larger than pillbugs, to which it is related!⁣ The expedition continues to bear fruit with scientific discoveries two years on, and this rewarding discovery is merely one out of 11 new species from the voyage.