Recalling the steamy spectacle, a zoo-goer revealed that he was visiting the iconic zoo with his family when the unusual scene happened. 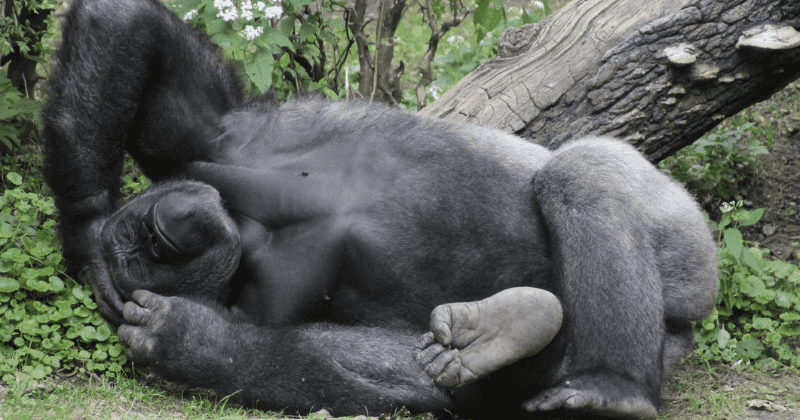 When visitors arrived at the Bronx Zoo, little did they know that they were in for an X-rated show. It was apparently a pair of frisky gorillas who suddenly got down and dirty for sexual pleasure at the NYC zoo's Congo Gorilla Forest. In an NSFW clip, a primate could be seen performing oral sex on its partner in front of shocked zoo-goers. As the video continued to garner more and more attention, animal experts explained that this behavior was completely normal. But that's not something the person who filmed the incident knew at the time. Speaking to The New York Post on the condition of remaining anonymous, the videographer shared, "I was shocked and had no idea that was a 'natural' act."

Recalling the steamy spectacle, he revealed that he was visiting the iconic zoo with his family when the unusual scene happened. "I was in the gorilla exhibit with my 4-year-old daughter and niece," he explained. "My wife had to stay out of the exhibit with my sleeping son, so I wanted to capture a lot of videos. Then this magic happened." In the footage, the simian could be seen pleasuring its partner which was splayed out on the ground, as onlookers immediately turned away with their children. When the outlet reached out to the Bronx Zoo for a comment, they didn't have anything to say about it. And what would they even say about some as natural as oral sex in the animal kingdom?

Surely, this isn't the first time gorillas were observed indulging in some extracurricular at the Bronx venue. Seven years ago, a Redditor posted a rather raunchy picture of two animals at the facility embracing each other in the "69 position" in front of children. Now great ape fellatio might seem orthodox to some, but the truth is far from it as oral sex is fairly common throughout the animal kingdom. Per BBC, bats, cheetahs, bears, and other species of apes have previously been seen taking part in such racy acts for pleasure. Even Bonobos are known for these kinky gestures and are infamously known as "hippie apes."

"There's no reason why an animal should seek sex unless they enjoy it," explains Discover Magazine, which means animals don't always perform sex for reproduction. Turns out, gorillas are "most likely to display responses similar to humans," which means they do experience orgasms. Moreover, bonobos and gorillas are the only known species besides humans to adopt the missionary position during sex. If the latest incident doesn't seem raunchy enough, wait till you read about a Japanese snow monkey who managed to redefine the term "buck buddy." Back in 2017, the monkey was seen engaging in a sexual act with a sika deer for the first time. Bottom line, oral sex in the animal kingdom is fairly common and there's no reason to be stunned by these natural acts.