Grandma Mistakes Grandson's Sex Toys For Socks, Ends Up Getting Her Feet Stuck In Them

The 21-year-old laughed as he struggled to get the "socks" off his grandmother's feet. 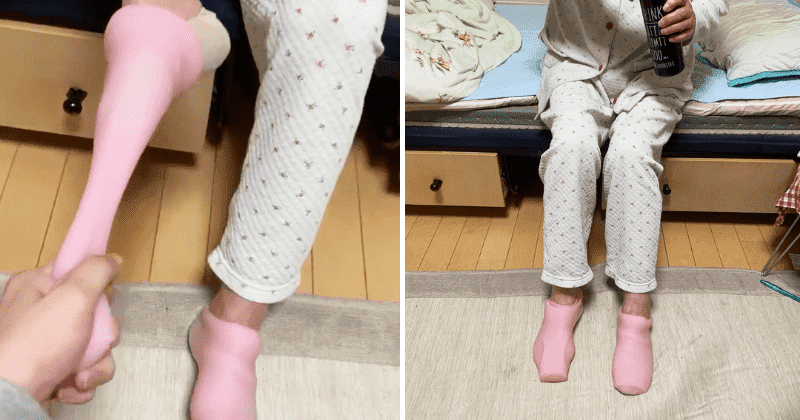 The 21-year-old was confused when he couldn't find the sex toys in his room, then he remembered his grandmother asking him for socks. After realizing his grandmother may have taken his fleshlight sex toys by mistake, he rushed to her room but found her wearing them. He then filmed her wearing them and took images as well. The toys are actually artificial vagina or anal opening made of silicon and therefore can be stretched. In fairness to the grandmother, the toys did fit snugly into her feet and does look like a bundle of socks. Since the sex toy was flexible, she managed to stretch them and envelope her feet like socks. It still wouldn't have taken a lot of effort but it appears it went the whole distance and managed to wear it.

The video showed woman's grandson struggling to pull the sex toys off of her feet with the caption reading: At the age of 21, I didn't think I'd be pulling a sex toy out of my grandmother's leg. She is confused by his actions as he laughs at the hilarity of the situation. She then sits up and the 21-year-old starts trying to pull the "socks" off her legs. He then proceeds to help her remove them while laughing. They both can be seen trying to stretch it out off of her feet. After struggling to pull them and stretching them out, she helps him remove them from her feet. He finally confesses to his grandmother that the "socks" were, in fact, sex toys before proceeding to pull them off of her feet. Throughout the 20 second clip, the man can be heard laughing as they both try to get the pink fleshlight sex toys off her legs.

After successfully pulling them off of her feet, he announced he wasn't going to use the sex toys anymore. He tweeted: I don't want to get caught doing incest, so if you want the sex toy with my grandmother's leg scum, I'll give it to you. We can only hope some of the message was lost in translation. If it wasn't already awkward to offer the sex toys to a stranger on Twitter, he went on to remind them that it was "warm." While I want to imagine no one would jump at that offer, but knowing the internet, it would too hasty to rule it out.