Grandma "Sandy" pointed the gun at the intruder and waited until the cops arrived. She decided not to press any charges. 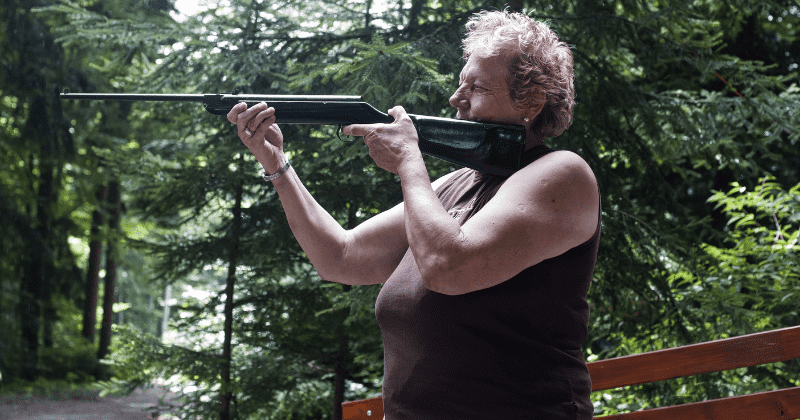 When a man tried to break into her house in the late hours of the night, a Washington state grandmother stood bravely with a shotgun to defend her property. Now, the granny who is only known as "Sandy" is being hailed a hero after she managed to hold the culprit at gunpoint after his failed attempt to burglarize her house. According to Daily Mail, the grandmom was inside her Spanaway home last weekend when her dog Booboo began barking. Recalling the frightening incident that unfolded on Sunday night, the 78-year-old told local outlet KIRO, "At that moment I was scared to death, I really was."

I wonder why she chose not to press charges against the intruder.

Without wasting a moment Sandy headed to the front of her residence and discovered a young man trying to break in. The robber happened to notice the grandmother and as soon as they locked eyes, he began fleeing after getting spooked. By this point, grandma Sandy was sure not to let fear get the best of her. She immediately got her gun and was prepared to prevent the man from disappearing into the night. "I said, 'Oh, no you don't. You stay right there.' And I reached over and got my shotgun and I cocked it," she told the news outlet.

I bet you'd rather have seen an unarmed grandmother murdered in her own home. You libs are sick people!

Soon she found herself pointing the legally-owned shotgun at the burglar while contacting 911. "When he got to the bottom of the steps I told him to sit down and I just stood there with the shotgun waiting for the police to come," she continued. Although she was initially startled by the encounter, she was more in control of the situation as the minutes passed. "I was totally calm, really, and truly. 'I said [to the man]: 'You know, I've got grandchildren your age," she revealed. For her, this gutting confrontation turned out to be an "empowering" experience.

"After he was so meek and mild and sat down like I told him to, empowering! I felt like at least I was in charge, I wasn't afraid," she told KIRO recounting the incident. Within minutes police officers arrived at the scene and arrested the young man. The elderly woman decided not to press any charges after all and he was subsequently released. When news about grandma Sandy's bravery reached Twitter, people could not help but applaud her for her calm and empowering handling of the situation.

Way to go! Hats off to you and I'm very glad you are safe! Bet you won't have any intruders visiting you any time soon, wrote user Mary Macias Cox. Another DaniAlicia expressed: Good job Sandy! My grandma used to bold and brave just like that! User Rhubabs shared: Great Drills by this lady but the criminal will be given a slap on the wrist set free. Unfortunately, when a home intruder entered the home of a grandmother in South Africa she reportedly died of a heart attack after her granddaughters were raped in front of her. The distressing incident took place in Impendle in KwaZulu-Natal province earlier this year.

Grandmother, 71, dies of shock after she was forced to watch her three granddaughters being raped https://t.co/83GKYiwHfJ

The culprit had locked the three women aged 19, 22, and 25 in the elderly lady's room before bringing them out one by one and raping them. The grandmother was reportedly forced to watch and when she could no longer take it, the helpless woman collapsed onto the floor. A spokesperson for the family named Mzandwile Ndlovu said, "We found the grandmother in the house but she was already dead and we think that she was so horrified by what she saw in these evil acts that it caused a heart attack. The three girls said the suspect did not touch her or harm her so it must be so."

Grandmother, 71, dies of shock after she was forced to watch her three granddaughters being raped at gunpoint https://t.co/8lVUiN7wSX

The police have started a hunt to locate the culprit who escaped after committing the triple rape and launched a fresh appeal for witnesses. The elderly lady's 31-year-old son is appealing to the public and any other witnesses to come forward in case they have information on the rapist. "This was a truly horrific act that he did. I think my mother died from a heart attack because the perpetrator did not attack her but he did pull my nieces out of a room and raped them one by one in front of her," he said. "There has been no justice for my nieces who are devastated. In this case, the rapist saw my mother collapse from the shock and horror but carried on. Where is the humanity?" he added.