Woman Enjoys Hitting Boyfriend In The Balls, Watching Him Cry In Pain. She Can't Stop Doing It.

The man has known the girl for six years, and have been together for two years 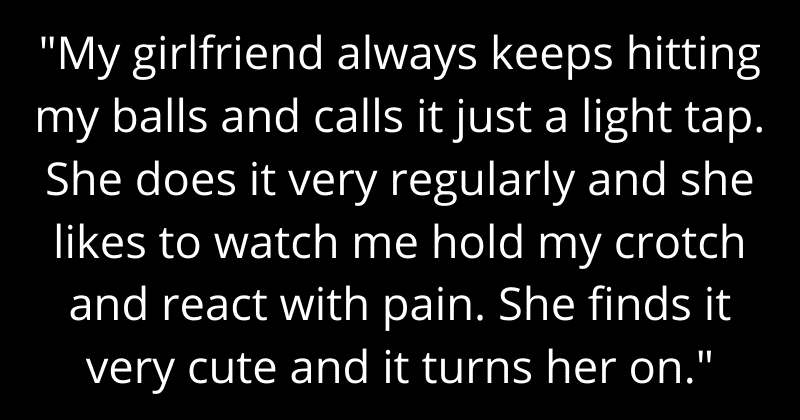 Back in school, when we'd roughhouse playfully or wanted to get some serious payback because someone was a snitch or your secret crush was revealed to all and sundry, most often than not, it would end up with blows that sometimes went below the belt. And let's face it, we've all winced in searing pain, as hot tears would fill our eyes to the brim from the sheer impact of it. But then as we grew up, we realized that it wasn't the most pleasant thing to do, and using our words were more effective tools to resolve a situation, or worse, tear someone down. Yet a 28-year-old Redditor ThrowRA_MyBallsHurt managed to perplex us all when he revealed a rather disturbing fact about his partner. He went to the subReddit "Relationship Advice" to seek some much-needed help on how to handle this. He wrote: My Girlfriend (26 f[emale]) has a weird obsession with my balls. She likes to hit my balls and watch me in pain. She just can’t stop doing it. Ouch!

He went on to explain the entire situation in detail.  He had known her for six years, and they have been in a relationship for two years now. He wrote: When Jenna entered my life, she changed it forever. She's been with me through all the ups and downs in my life and has always been pushing me and supporting me. She's the best woman that I've ever met and I feel that she's a blessing sent to me by God himself. However, it was the curious case of ball-bashing that he initially brushed off as no big deal, but now it had gone out of control.  He continued: So as it says in the title, Jenna has a weird obsession with my testicles. Not that sort of obsession where she wants to put my balls in her mouth just as she sees it. Nope (although I guess I would like that a little), but instead an obsession where she likes to hit it and watch my reaction.

Lest the Redditors had the gotten the wrong impression, he clarified that: Jenna isn't a violent or an aggressive woman at all, but she just wants to have fun. She "taps" and "slaps" my balls every now and then. After she goes down on me and finishes me off, she gives me a hi-five.... in the balls. You know when you spank your partner's ass because it's really sexy? Yeah, Jenna does that too....a lot.... to my balls. Whenever she sees my scrotum and testicles hanging, she HAS TO SLAP THEM, OTHERWISE, HER DAY WON'T END! Now it's quarantine time and we both are alone at home and we've been having a little bit more sex than usual and every time she sees my innocent little balls hanging, she wants to slap them. I told her to stop doing it and she said: "come on, don't take it seriously, it's just a little tap". Now let me tell you, those "taps" aren't very hard and sometimes, it doesn't hurt at all, but most of the time, they do... They hurt a lot. Sometimes she hits a sensitive spot with that "little tap" and it hurts more than a punch from Hercules in the face. So whenever she even touches my testicles, even if it doesn't hurt, I hold my crotch and react in a painful way so that she gets "satisfied". Sometimes my painful reaction is real, sometimes it's fake and sometimes it hurts so much that I can't take it anymore."

Most Redditors were of the opinion that he should have a talk with her, and ask her to stop. Others asked him to give her an ultimatum that if she were to continue doing so, he would have to end things with her.  “If you don’t like it and don’t want her to do it, then she should not be doing it, no matter what her kink is. If your kink was to bite her nipple really hard so she feels pain, and she didn’t like that, you would probably stop, right?” one person wrote.

Another added:  “If you’re not giving consent to this kink then it’s not okay and she needs to know that very seriously. It doesn’t matter how amazing she is outside of this situation; Jenna is not respecting your boundaries.” A third noted: “I’d say have a serious conversation about how you’re not comfortable with it, and perhaps she can give some insight as to why she thinks it’s okay to continue doing this when you’ve asked her to stop."

It later turns out that the man did end up having a talk with his girlfriend about this, but it didn't work out as well as he expected. In an update, he wrote: She didn’t take me or my words seriously at all! As I was reading the article and telling her how painful it was, she was laughing at me and saying things like ‘aww, really? That’s so interesting.  Now that's just unfortunate!