Guy Says Women With Abs Are "Gross" And "Look Like Men", Gets Roasted

Another cis man on the internet has an opinion about women's bodies and gets shut down with witty burns. 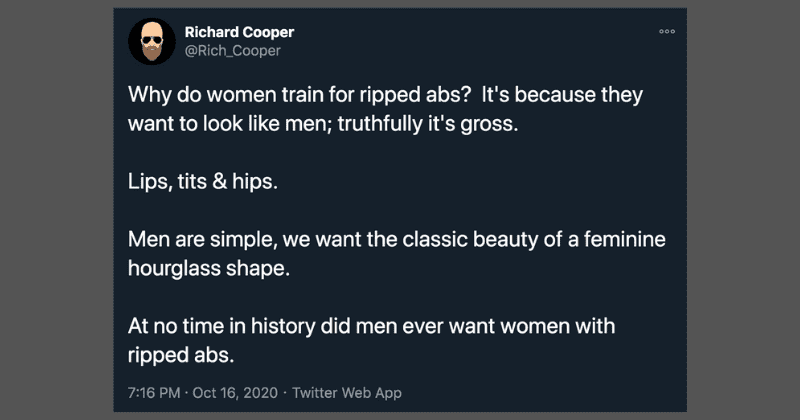 The internet in general and social media, in particular, has taken the role of a personal diary for many people. It has become a space online that allows users to brain dump all their thoughts and opinions. Every single thought conceived in the mind need not be expressed, especially if the take is so bad it feels like taking a trip down to the dark ages. Passing off bigotry as a real opinion is worse since it will attract other uninformed bigots like moths to flames. One such thoughtless opinion was tweeted by a Canadian man who really thought he had something to say.

Why do women train for ripped abs? It's because they want to look like men; truthfully it's gross.

Men are simple, we want the classic beauty of a feminine hourglass shape.

At no time in history did men ever want women with ripped abs.

Richard Cooper on Twitter proclaims that he "crushes comforting lies, with uncomfortable truths on money, business & women." In what he thought was one such "uncomfortable truth", he tweeted: Why do women train for ripped abs? It's because they want to look like men; truthfully it's gross. Lips, tits & hips. Men are simple, we want the classic beauty of a feminine hourglass shape. At no time in history did men ever want women with ripped abs. Many of his loyal followers saw merit in the statement. But there were others who have criticized Cooper with wit and roasted him with such flair that should teach him and other cis men that they have no say in the matters of a woman's body.

Not everything women do is to get male attention. These women care about being fit and athletic, not landing a boyfriend.

They maybe want it for themselves and not for men attention ?

Thats what YOU want, I'm aware of the fact that beautiful women come in many different shapes and sizes, and ALL of them are allowed to do whatever they like with their bodies without the input of anyone else, especially you 😛

BeatMD tweeted: As someone that trains at specific powerlifting and bodybuilding gym, it because it's their passion. It's their job, they have goals. What I see typically when I walk in is guys and girls posing in mirrors. I agree with what most of you say, but this I disagree on.

And this whole thread of replies was gold:

Fellow historian here. I’ve reviewed your findings and I concur

Hi. Historian as well. This appears to be the historiographical consensus.

English/Creative Writing major here. There isn't a believable character in the literary universe who wants you, either. Any editor worthy of a job would call BS on even the most desperate fictional woman interested in you.

Hi. Barrister here. I’m comfortable in saying that at no time has it been unlawful for women to have abs. Because even we know that women need to have strong stomachs to put up with all the men who think they should be able to control women’s bodies.

Hi. Rocket scientist here. I explored all over the solar system and haven't found any extraterrestrial life that wants Richard.

Hi Lawyer here. I can confirm that women don’t want you even when they need an alibi !

Science teacher here. There is not a single scientific concept I can think of that would disprove your assertion. Biological or otherwise.

As an archaeologist I concur. And I feel comfortable adding prehistory to this

Hi there, proctologist here. And even though I don’t know @Rich_Cooper personally, I do know an asshole when I see one.

Cooper was labeled as what some might call an incel belonging to the "Men's Right Activist" club.

Hi, social worker/now IT. I'm comfortable saying at no point in history have women thrived or stayed with, or loved toxic narcissists like Dick Cooper.

This is why they have MRA. All the losers band together and complain about women because we all know they're cesspools.

And the burns kept on coming:

Congratulations on being the laughingstock of the internet today. It even translated across platforms! My women’s lifting group got a real kick out of it. pic.twitter.com/l3DmWIesvV

After the roasts and pointing out the obvious, that women did not exist to please his whims and fancies, it encouraged women to get abs even more.

Woman here, I'm comfortable in saying never in my life have I been more motivated to get abs. An all natural douchenozzle repellent is what us gals need. Will report back when abs are achieved.

I added to my ab workout this morning, just to be petty..thanks for the inspiration, Dick! pic.twitter.com/vWm5M3rGLR

Most of the women I train with or coach have ripped abs due to the necessity of extraordinary core strength in combat sports.

That's a LOT of time at a gym. No woman spends that much time in a gym for a guy. It's for her....and more power to her. pic.twitter.com/zAgU2MS8qZ