trending celebrity people lifestyle news animals
Halle Berry, 54, Looks Half Her Age As She Flaunts A New Haircut At The Oscars

Halle Berry, 54, Looks Half Her Age As She Flaunts A New Haircut At The Oscars

Many fans could not help admire the beauty who attended the ceremony with her boyfriend, musician Van Hunt. 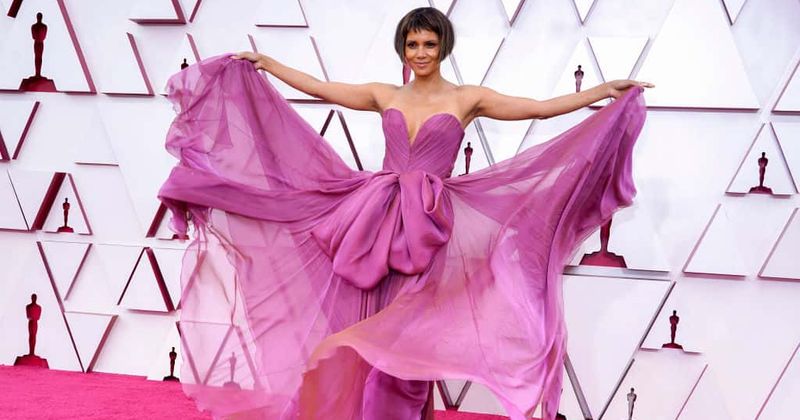 Halle Berry's chic hairstyle—a microbob cut with angled bangs and her dreamy magenta dress was the talk of the Oscars. It was a dramatic transformation considering her long locks we've been seen to seeing off late. But knowing Barry, she's someone who likes to experiment with her overall look, especially on the big stage. Her hair was done by celebrity hairstylist Sara Seward, according to Allure. So far as makeup was concerned, it was kept minimalistic by Jorge Monroy. Berry who presented the award in the Best Cinematography and Best Production category looked flawless in the strapless Dolce & Gabbana dress that had a plunging neckline. Her jewelry was courtesy Ridano and heels by Christian Louboutin.

The dress was custom-made for the actor, took 240 hours for the fashion house to make, and included a custom dye job at its facility in Milan, according to a Vogue report. Her long-time stylist, Lindsay Flores, was the person behind Berry's look and said, “I was really wanting to use new silhouettes and colors that we hadn’t played within a long time. Tons of color swatches, fabrics, sketches, and runway looks filled the board on this one as we played with different concepts. Ultimately, we landed where we did and I’m so proud of this moment.” Speaking about the experience working with her long-time client and friend for the 93rd iteration of the award ceremony, Flores added, “Halle and I have been working together for over 20 years. There is a trust between us that allows fashion magic to happen.”

She added, “We always keep it real, keep it easy, and keep it fun—because fashion should be fun.” Berry was seen at the awards with her singer-boyfriend, Van Hunt, who wore a classy navy velvet suit. The two sure did attract the eyeballs with their stunning looks. Berry isn't new to flaunting her look on social media and that's exactly what she did on Instagram. The actor posted a number of pictures of herself just before the ceremony. These were liked thousands of times and were received with awe by her fans. On Twitter, many of her fans raved about her look. One person wrote: i love the new hairstyle..but NOBODY can rock that Halle cut like Halle... i miss it sooooooo much!!!!!!! referring to the 2002 Oscar look.

Another fan added: I think her hair looks cool with those highlights, thought that was the trend, most wanted haircut now! For quite a while during her career, Berry sported very short hair. Who can ever forget her unforgettable pixie look at the 2002 Oscars where she also made history. She became the first African-American actor to win the award for her role in Monster's Ball. She was also seen with the look in several movies such as a Bond girl in Die Another Day with Pierce Brosnan. The short haircut is not just a style statement for Berry, as she highlighted in this interview with Huffington Post in 2012: "I am my best self when I have super short hair. That’s when I feel most like me and most confident. Growing up as a black woman, I felt that if I didn’t have long hair, I wasn’t going to be beautiful. I always thought that. Cutting my hair was freeing."

In honor of the 93nd annual Academy Awards tonight, here's some of the most iconic fashion choices in Oscars history. Some, like Halle Berry's Elie Saab gown from 2002, have become as famous as the stars' Oscar-winning films.https://t.co/20ogHhIUCb

And we all know, Berry is not one who follows trends but one who sets them. She told PopSugar, "I don't really give over to trends and beauty fads, and I'm not one to jump on the bandwagon. I've worked really hard to stay myself through all of this that's going on and to stay true to what I think beauty is so that I can feel my best self."