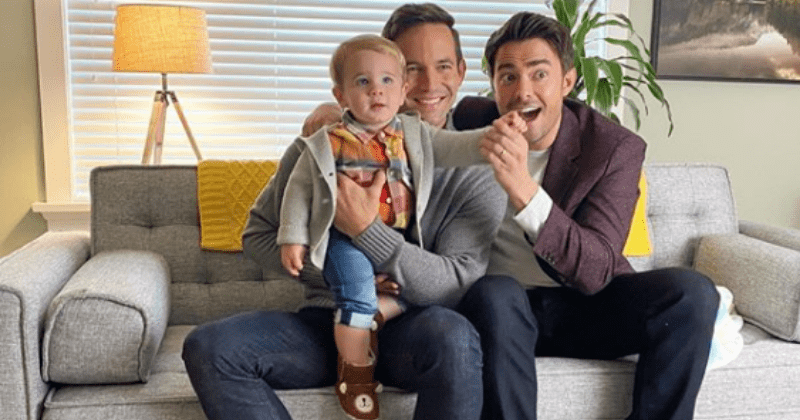 Every year, we all wait eagerly for the holiday time to come around so we can snuggle up under warm blankets and hot cocoa to watch Hallmark Christmas movies. The films are cheesy and more or less have the same feel-good storylines, which is why they are so pleasant to watch. It is the time to be jolly after all - so why should the movies based during Christmas be any different? But things are finally getting more interesting this year after Hallmark vowed to be more inclusive and feature more LGBT-storylines in their Christmas movies. After a recent film included a same-sex wedding as a subplot, we are getting a movie with gay men as protagonists.

According to a report by Good Morning America, a new movie titled The Christmas House is all set to release this Christmas season. Michelle Vicary, executive vice president of programming for Crown Media Family Network, has said that the movie will feature Mean Girls actor Jonathan Bennett, in the story about a gay couple looking to adopt their first child. Bennett will be acting opposite actor Brad Harder and starring alongside One Tree Hill actor Robert Buckley, Ana Ayora of In the Dark, along with veteran actor Treat Williams, Sharon Lawrence of NYPD Blue.

There are no words right now, only gratitude to everyone at @hallmarkchannel for this opportunity, and to @robertbuckley for creating this character/story and being a true ally to the #LGBTQ community. https://t.co/T3yFJ6SCrE

The film is all set to release on the Hallmark Channel on November 22, 8 pm ET/PT. The synopsis reads: Working through some difficult decisions, Mitchell family matriarch Phylis (Lawrence) and patriarch Bill (Williams), have summoned their two grown sons – TV star, Mike Mitchell (Buckley) and Brandon Mitchell (Bennett) – home for the holidays. It is their hope that bringing the family together to recreate the Christmas house, will help them find resolution and make a memorable holiday for the entire family and community. As Brandon and his husband Jake (Harder) make the trip home, they are anxiously awaiting a call about the adoption of their first child. Meanwhile, Mike reconnects with Andi (Ayora), his high school sweetheart.

"Our holiday table is bigger and more welcoming than ever. This year’s movies reflect our most diverse representation of talent, narratives, and families, including The Christmas House," said Vicary, according to PEOPLE. "Our movies are rooted in warmth and positivity, meaningful connections, family gatherings, and seasonal traditions—a winning formula we hope will bring our millions of viewers much-needed levity and holiday cheer at the end of a tough year."

This move comes after Hallmark came under fire for pulling LGBT-ads on their channel after receiving complaints from the fringe-conservative group, One Million Moms.

Hallmark Channel says LGBT storylines and characters will be announced 'in the coming months' https://t.co/agpo8GNoZD

Following the backlash, the president and chief executive of Hallmark Cards said in a statement, “Our mission is rooted in helping all people connect, celebrate traditions and be inspired to capture meaningful moments in their lives. Anything that detracts from this purpose is not who we are. We are truly sorry for the hurt and disappointment this has caused.”

The company then announced that it would work with GLAAD, a national L.G.B.T.Q. media advocacy organization, “to better represent the L.G.B.T.Q. community across our portfolio of brands” reported The New York Times.

This film appears to be the first of its kind where Hallmark has gay characters as protagonists. Earlier in September, the movie, The Christmas Set-Up, featured a real-life same-sex couple, Ben Lewis and Blake Lee. It was released by Lifetime, reported TODAY. Bennett, in real life, is also in a committed same-sex partnership with his partner, Jaymes Vaughan. The film is a marker for all the good things to come.

Hallmark is also releasing a ton of other films as part of the Countdown to Christmas special. You can take a look at all the films in detail, here.

Our holiday table is bigger and more welcoming than ever!
🎄🎀🎁🕎@hallmarkchannel @hallmarkmovie#Hallmarkies #countdowntochristmas #MiraclesOfChristmas https://t.co/LDKJPb1JyN