The white and black Staffordshire Bull was named Snoop by RSPCA officials in the U.K. 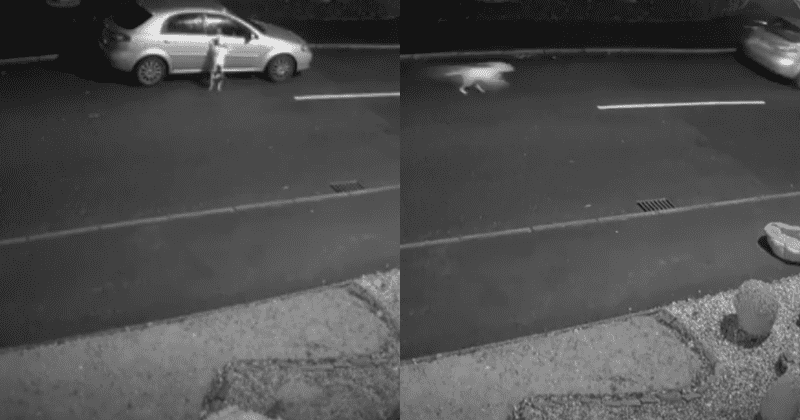 If you can't look after a pet the best thing to do is not get one. But there are many heartless pet owners out there who feel they've made a mistake once they get one and don't think twice before abandoning them as caring for them becomes tough. One such sickening pet owner in the U.K was caught on camera abandoning his dog by the roadside and then zooming away in a car. The dog is seen heartbreakingly running after its master and jumps on the car's window as they leave the animal all alone on a dark road in Stoke-on-Trent, reports Stoke Sentinel. The dog was identified as a white and black Staffordshire Bull Terrier and was nicknamed Snoop by RSPCA officials. Video footage from surveillance cameras showed the owner getting down from the passenger's side of the car and then going to the back of the car to get the dog's bed.

Dog desperately tries to jump back in car as owner abandons it by side of road https://t.co/i3AEI2cb83 pic.twitter.com/dubxkH2kpQ

He then leads the dog towards the other side of the road. After a while, he removes the dog's leash while also throwing the bed on the road near the pavement. He runs back to the car but is followed by the dog. The car remains in the same place for a while during which the dog runs around and jumps to the car's windows as if pleading for his owner to not leave him. He does this several times. When the car ultimately leaves, the dog is seen frantically running towards it. When it stops at an intersection the dog is once again seen jumping on the window. Snoop was found by a man an hour later. He, in turn, informed the RSPCA. Natalie Perehovsky, an RSPCA inspector appealed to the public for information to find the dog's owner. She said, “The footage has to be seen to be believed, it’s just awful."

Hundreds offer to rehome Snoop the abandoned dog BBC News CCTV footage of him being dumped in Stoke-on-Trent has been viewed by millions, the RSPCA says. https://t.co/Lgg4bATAFo pic.twitter.com/wamQMv95KQ

Commenting further on the December 2019 incident she added, "To see the poor dog in such obvious distress jumping up at the car as it drives away it just heartbreaking. I can’t understand how someone could do this. The vets scanned his microchip and we have traced two previous owners in the Birmingham area, but do not believe either are the current owners, and therefore not those responsible for abandoning the dog." She also highlighted that besides the man who abandoned the dog and seen in the footage was another person who was seated in the driver's seat. She said, "I am very keen to hear from anyone who recognises the vehicle, the man or the dog." Giving more details about the dog she said, "The veterinary staff have nicknamed the dog Snoop, and he is in good condition, thought to be two years old."

Thank you to everyone who has shared the @RSPCA_official appeal about the dog Snoop who was dumped on CCTV in Stoke-on-Trent. It has gone global and millions of people have viewed the footage. This is proof of the power of the media! Hopefully we will find the man responsible. pic.twitter.com/c5goObOaQY

She added, "He is a white Staffie with black marking, and is such a friendly, lovely boy. He’s currently being cared for at a private boarding kennels where he will get all the care he needs whilst I investigate further." Perehovsky said further, “Anyone who recognizes the vehicle, the dog or the men in the footage can contact me in complete confidence. It’s beggars belief that someone could abandon a dog like this at Christmas, but we are so thankful to the kind people who found Snoop sitting sadly in his bed, for taking him to the safety of vets straight away.”

🐶😍 We're ecstatic to announce that Snoop, the gorgeous #Staffie abandoned by the roadside, has found a new home! He's living a life of luxury in his new Hertfordshire pad, which has a large garden and is surrounded by fields to run and play in! More here https://t.co/QoHzdkV0PB pic.twitter.com/BFwC0RjQpp

Since the video became viral on social media, many have come forward to home Snoop with even rapper Snoop Dogg stepping in to help. A dog named Tin Tin in Brazil was similarly abandoned by its owner this year as per our report.

The owner, a woman was seen in the footage step out of her white car before shoving the dog who had only two limbs, on a sidewalk in Sao Leopoldo, near Port Alegre. She then got back into her car and drove away. Tin Tin tried to run after the car but in vain. The woman's husband who worked nearby found the animal. He was roaming around the neighborhood aimlessly. But instead of taking him home, he took the dog to an animal shelter, effectively abandoning him for the second time.