The sergeant instantly looks towards the poolee and in an instant, his smirk vanishes. 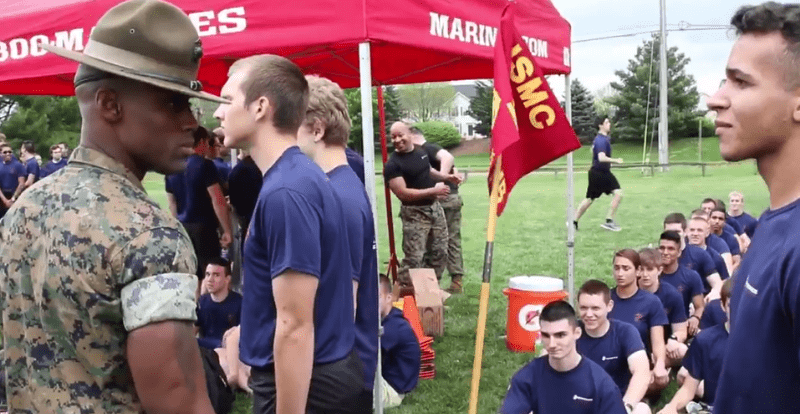 It seemed like a normal training day at the Marine Corps Recruiting Station Frederick in Maryland—drill instructors yelling commands to the dozens of poolees gathered around to prove their mettle. A poolee is a prospective Marine who has to run the hoops and pass all the tests before being taken into the 13 weeks of Marine Corps Recruit Training. One poolee, however, was in a playful mood and did something he shouldn't have done, only to realize the error of his ways seconds later. In a video posted by the U.S. Marines on Twitter, a poolee runs up to a drill instructor and blurts out a careless, "What's up sir?" in the midst of an exercise with a smirk on his face.

According to American Military News, Marines know just exactly why pulling such a stunt is not a good idea. Luckily, the poolee in question isn't a full Marine yet so the instructor goes easy on him. As soon as the poolee comes closer to Sergeant Jason Jarmond, we see the words “What not to do to a Marine Drill Instructor” appear on the screen. The Sergeant instantly looks towards the poolee and in an instant, his smirk vanishes. He just has one word for the young man—"Run." The poolee sprints off along the field as Jarmond trails him just meters away, yelling at him throughout the entire course of the run before he gets back in formation.

What keeps the hat on when he's running? Fear or intimidation? Lol

Seemingly dissatisfied by the work the poolee put in, Jarmond orders him to run once again. "The opposite of #MyBestDayIn3Words —"What's up sir"," wrote the U.S. Marines and shared the video. Some people on the platform pointed out how it's such a bad idea to pull a stunt like this, while others noted that the whole situation was a bit funny. Michael Armstrong wrote: "Always show respect to your drill sergeant. You know what happens when you don't." Commenting on the YouTube video, Dirty Dezrat wrote: "The look on Drills face when it's over is the best. Not even breaking a sweat or breathing hard." Dom Giunta made a slightly unsettling observation about Sergeant Jarmond. "This guy is terrifying and runs like a horror film monster but his "go away yo!" is so silly and petty," before adding that he loved the whole incident.

Johandre Jacobs meanwhile, recognized two other drill instructors in the background who appear to erupt in laughter as though they put the poolee up to the task. "You can see the two drill instructors laughing at the back who set him up for this". Arttu Vesterinen added: "He's now secretly his new favorite recruit." TaeSonWoo stated: "That drill sergeant was thinking of 1000 different ways to end that man’s whole career in the span of 1.8 seconds." Drill Instructors are different from Drill Sergeants as the former are brought in to "Make Marines." They typically are required to have served at least one full four-year enlistment in the Marine Corps, hold the rank of sergeant or higher, and pass all physical and medical examinations.

In terms of training, marines report to either Marine Corps Recruit Depot Parris Island in South Carolina or Marine Corps Recruit Depot San Diego in California, where they are then assigned to Drill Instructor School. For a duration of 12 weeks, drill instructors learn to train recruits in physical fitness, military history, drill marching, swim qualifications, and leadership training. Once the poolees graduate, they are then assigned to a Recruit Training Battalion and train a platoon of recruits at 13-week intervals, with 10 days of leave in between each training platoon.

.@USMC Dude was supposed to say "What's up, *doc*?" like Bugs Bunny but he chickened out