When he reached the venue, he spotted a woman pinned under the vehicle's sunroof and saw her child crying uncontrollably. 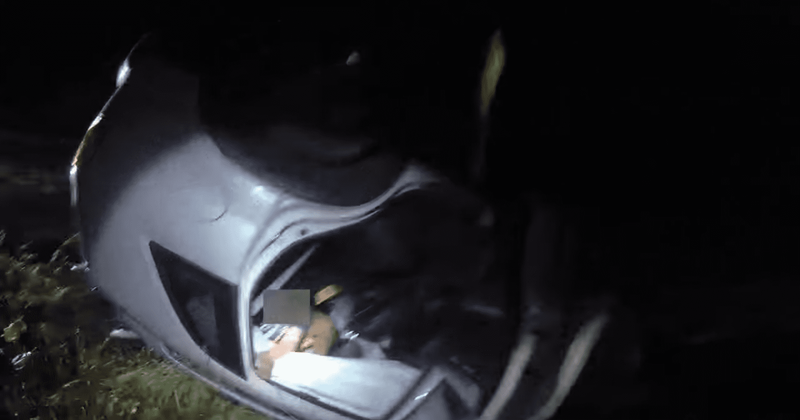 Trigger Warning: This story contains disturbing details of an accident some readers may find disturbing.

On May 7, Deputy Jon Holt was responding to a report of an overturned vehicle with entrapment in Gloucester County, Virginia. When he reached the venue, he spotted a woman pinned under the vehicle's sunroof while her distraught child screamed for assistance. Without wasting a second, Holt rushed to the accident site and single-handedly lifted the car off the woman's head and rescued her, Good Morning America reports. The officer's selfless gesture is being called "heroic" after Gloucester County Sheriff's Office released a video of the incident on May 18.

"The driver was laying underneath the vehicle with her head pinned by the sunroof," a statement released by the Sheriff's office read. "Seeing the trauma her child was witnessing, Deputy J. Holt went into overdrive." In the video, we see the entire scene captured as the officer arrives at the site, sees the overturned vehicle, and sprints towards the accident to help the woman. When he's close to the vehicle her child, whose face has been blurred, the deputy sees them begging the officer to help her mother. "She can’t breathe. She can’t breathe. Please help," the visibly shocked teen says in the footage.

"She is trapped under the vehicle. I can’t get it off," Holt says in response and asks the child to carefully get out of the vehicle. The footage then goes dark but we can hear the officer exerting himself and groaning loudly as he attempts to lift the car off the woman, and succeeds in doing so. "Through sheer will and determination due to fearing the female may succumb to her circumstance in front of her panic-stricken child, Deputy J. Holt took quick action and was able to physically lift the vehicle up enough for the driver to maneuver her head out to safety," the statement continued.

The deputy's efforts didn't go unnoticed; people responded emotionally to the video footage on the Sheriff Department's official Facebook page. One user was horrified at what she watched but was thankful Deputy Holt was there to rescue the woman. "Hearing the screams of those children crying for their mom has me in tears. Deputy Holt you are amazing, and something to be proud of. I feel fortunate to live and raise kids in this county knowing there is an amazing sheriff's office with deputies who do what you do. Thank you, Sir." A second user wrote: "Another Great job deputy Holt. Again you have gone above and beyond the call of duty. Putting others before yourself should show others that you take your job seriously and you care for the community. Your great heroism is unremarkable and we are proud and honored to have you part of Gloucester's sheriff's department."

A Virginia sheriff’s deputy sprang into action to rescue a woman who was pinned under an overturned vehicle. As her children screamed, officer Jon Holt somehow lifted the vehicle up to free the woman. pic.twitter.com/fwIw2KW7eI

A third commented: "Tears. As a mother to 4 young babies, to hear the cries of desperation from that child to their mother and deputy Holt, whew. No words." Holt has been a regular at performing miraculous feats for which he even received a Top Cop Award just three months ago. Highlighting the deputy's bravery and commitment towards ensuring people's safety, the statement from the Sheriff's office said: "Deputy J. Holt recently accepted both the local and regional Top Cop Awards from the Greater Hampton Roads Regional Crime Line on February 2, 2021, for his commitment to public safety after saving the lives of 2 individuals from a burning house on the afternoon of March 24, 2020."

This guys body cam goes dark just as he summons up super strength like a @Marvel character!?! #Wow AND you can see him bolt into a burning house and save 2 people!! #Hero #Marvel