Keith Walker, 53, was on his way to pick up his dog at the Atlanta shelter when he noticed the fire 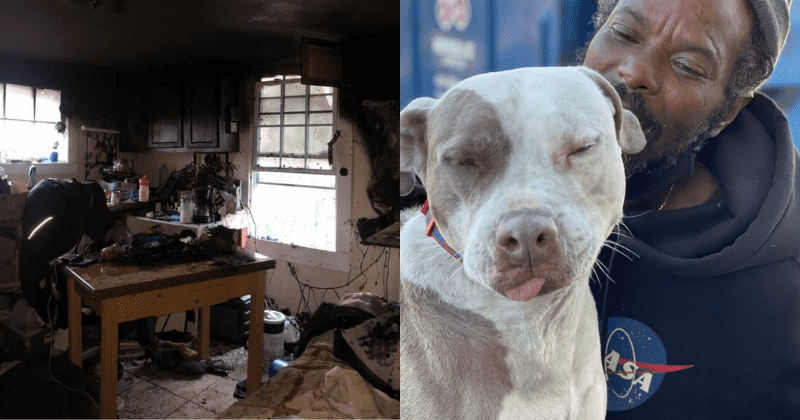 A homeless man in Atlanta is being hailed a hero for rescuing 10 cats and 6 dogs from a burning shelter. Keith Walker, 53, risked his own life to get the animals to safety but said it was something he just had to do at the time. Walker's pitbull, Bravo, would often be allowed to kept at the W-Underdogs shelter. After the incident, however, it is no longer "inhabitable." Walker was on his way to pick up his dog and take him for a walk when he noticed the fire. He told CNN. "I was nervous as hell, I'm not going to lie. I was really scared to go in there with all that smoke. But God put me there to save those animals. If you love a dog, you can love anyone in the world. My dog is my best friend, and I wouldn't be here without him, so I knew I had to save all those other dogs."

53-year-old Keith Walker saved six dogs and 10 cats from W-Underdogs animal shelter when it was engulfed in flames. https://t.co/GdQOLb23z0

Luckily, the shelter was just a week away from moving to another location but now, plans have been preponed due to the incident. Sharing news of the new facility and the condition of the rescued animals, a Facebook post by the shelter revealed, "While the new facility is not exactly ”move-in ready” we were able to move the animals safely into the new facility for the night. They are all happy, warm, safe, and comfortable in their new temporary home. Moving into the new facility ahead of schedule will be challenging but the W-Underdogs and this community have already risen to the occasion." The post further shed light on Walker's involvement and wrote, "The Fire Department reported that a homeless man down the street rushed to the scene of the fire and helped bring the animals to safety."

Other volunteers helped in relocating the animals to the new facility. The shelter also thanked the work of the Atlanta Fire Department and other parties and individuals for coming out to help them. In another post, the shelter said, "Mr. Walker is indeed our hero and proof that the hard work we do in the community is rewarded in so many different ways. We are in contact with Keith and working to assess his needs and wants. He is not currently accepting offers of help but we will continue to stay in touch with him and share as much as he will allow. We will also continue to provide food and medical care for his dog, Bravo." Following Walker's role in the rescue being known publicly, there has been an outpouring of queries as to how he could be helped.

The shelter posted, "Keith embodied the spirit of W-Underdogs when he saved our animals in their time of need. We value the relationship we have built with him this past year while helping him to care for his dog, and we will continue to work with Keith according to what his wishes are. While we are certainly appreciative of the outpouring of recognition for his selfless deed, it is also important to respect his perspective on what he may feel he does or does not want in terms of help. This is the same credo we follow with all of the members in our community in which we serve, as we continue to work hard to build and maintain the bond of trust between us." Meanwhile, a GoFundMe page was started for Walker - it has already collected nearly $100,000, much higher than the goal of $5,000.

A GoFundMe page was also started for the shelter. Gracie Hamlin, founder of W-Underdogs, told CNN, "Even the firefighters didn't want to handle the dogs. They called animal control, but Keith was already in the building pulling out the cats and dogs until they were all safe." She called Walker "my guardian angel". The shelter has also put out the word that all the rescued animals are in need of a home and appealed to people to come forward to adopt them or help them find homes.