Woman, Who Had Been Homeless For 2 Years, Can't Stop Dancing After Finally Landing A Job

The 21-year-old was seen on CCTV ecstatically dancing in the car park. 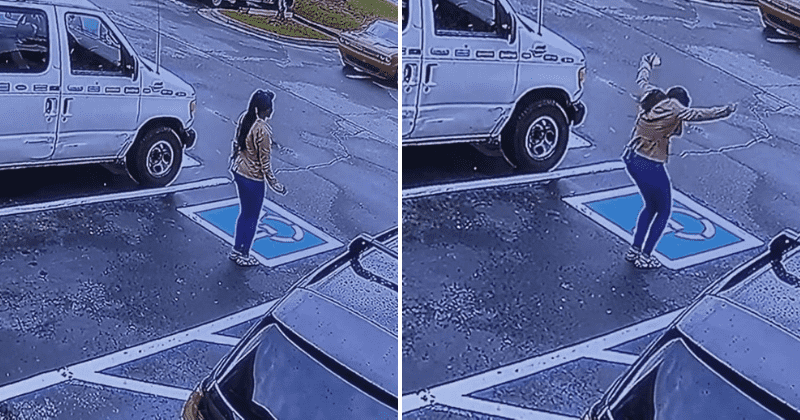 One of the most genuine ways to express happiness is by dancing as if no one is looking. It's almost an automatic response to most people when things go exactly how they want, especially in the most desperate of times. Due to the pandemic, a lot of people have been going through an extremely difficult situation, especially regarding their jobs and employment. From salaried individuals to self-owned businesses, nearly everyone had taken a major hit, and some far more than others. When the going gets tough, the tough certainly gets going, and we cannot help but express our joy to the fullest when things work out right in time of need.

Kayallah Jones is a 21-year-old woman who had been homeless for 2 years. She had lost many jobs and really struggled to find work amid the Covid-19 pandemic, CBS reported. Jones recently found out that she had landed a job and could not contain her happiness. She was captured on CCTV dancing like nobody's watching at a parking lot and the clip has since gone viral for all the right reasons. The video of Jones hit the internet with a wave of inspiration and every moment of her celebration was a long time coming. She was seen dancing in a parking lot just outside The Spot, a sports bar and restaurant in Atlanta, Georgia that she just got employed at.

The video of the very exciting dance soon found its way to many corners of the internet and went viral. It has gotten over 1.2M views on Instagram alone, with another 1.5M on TikTok and Twitter. Meanwhile, the owner of the restaurant, Darkara Spence, said that she decided to hire Jones because she had great energy and that she truly felt her positivity from the moment she walked in. Jones is now employed at the restaurant as a server. After seeing her dance in the parking lot, Spence called Jones: “I said I’m going to hire you and I’ve seen your happy dance so you can continue dancing. She was just screaming through the phone and it was just a beautiful moment for me.”

Spence, much to her credit, went on to post the video of the CCTV footage of Jones doing her happy dance on social media. In the video, we can see an ecstatic Jones raising her hands and feet and start to flail side-to-side. Initially, Jones is a little conscious of her surroundings and takes a look around to see if anyone's watching. Then she goes all-out with the dance and doesn't seem to bother about anyone. After she was done, she continued to walk away in a nonchalant manner. It was barely a few moments of pure expression but it meant the whole world to her.

Jones has been through a ton of hardships and struggles, and she is one of many thousands that are currently in such dire predicaments. It's great to hear that she has landed this job and the emotions really tell in the manner of her dancing. She explained that she felt excited and somewhat overwhelmed by how happy this positive change in her life was. The internet also was all in praise of her excitement and shared in her happiness as the video went viral. According to Bored Panda, when Journalist Jamie Kennedy interviewed Jones and Spence, the former was asked when people should do the dance. Jones replied: "Anytime they’re happy, anytime you get a blessing, anytime you had a great opportunity and you have something that you were working towards for years or months, or praying for.