The woman, who committed no crime, continues to battle the negative effects of the experience. 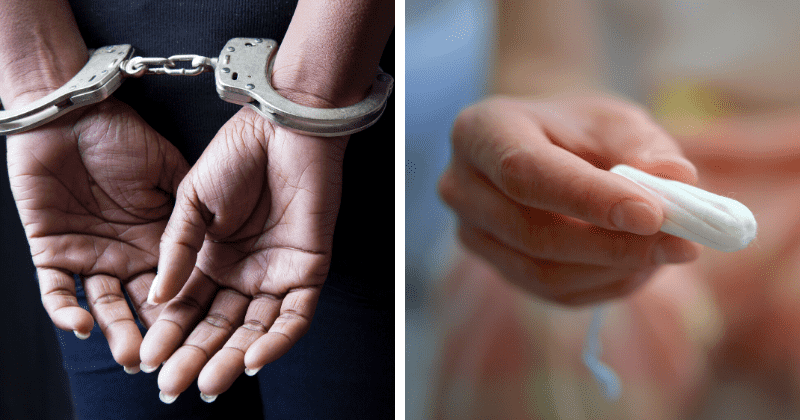 As the world continues to slam unnecessarily aggressive and excessive force used by police officers, a 2016 incident has resurfaced to highlight that very point. A San Antonio woman, in her late 30s at the time, was swarmed by cops who searched her and her vehicle as they thought she had illegal drugs on her. The woman accused a female officer of pulling out her tampon in public.  According to Insider, Detective Mara Wilson was to conduct a full-body search on Natalie Simms, and only then could she leave, according to court records filed in the Western District of Texas. According to dashcam footage, the conversation between the two went like this: "Do you have anything on you?" Wilson asked Simms. "No, ma'am, nothing," Simms replied. Out in public, the detective asked if she could pull down her shorts and search her.

@BoingBoing Embarrassing of our police and country.

Allegedly Wilson did not have a warrant at the time. Wilson instructed Simms to "spread your legs," and asked, "do you have anything down here before I reach down here?" The lawsuit stated that Officer Wilson intended to reach down into Natalie's pants and made contact with her pubic hair and vagina. Simms told the detective that she was on her period. Five male officers watched on as Wilson "pulled open Natalie's pants and underwear." She pulled out her tampon "knowing that Natalie was on her period," and even though "Natalie had not consented to such a search, seizure, and/or use of force," according to the lawsuit. "Is that a tampon?" Wilson asked."It's full of blood, right? Why would you do that?" Simms asked in shock. "I don't know. It looked like it had stuff in there." "It was really nasty, but I just wanted to make sure there wasn't anything in there," she told another detective, according to court records. She claimed she needed to conduct the search because "you don't know what they have. I mean, they stick all kinds of stuff."

The lack of basic respect shown by police officers is unfathomable.

Simms later filed a lawsuit against the city of San Antonio in 2018. In 2019, Simms was awarded $205,000. Wilson retired in 2017 and never apologized for her conduct.  "Natalie suffered through a shocking display of what can occur when police power is unchecked. Natalie was humiliated and degraded as a result of the police officer's actions," her lawyer Dean Malone told local news station WOAI in 2018. "This wasn't really about the money for her at all, it was about the return of her dignity," Malone said. "When she filed suit it was to assert her rights and obviously she believed that she had been violated." Simms is now over 40 years old and continues to struggle with the traumatizing incident."I think any male or female to go through what we see as a body cavity search is traumatized and I suspect leads to life long issues," he said. "I don't think any amount of money will completely restore her dignity that was taken from her on that San Antonio public street."

This was a sexual assault IN PUBLIC... the cop should be fired, and she should be awarded 10x that amount. Outrageous.

The story has come back to light with many Twitter users absolutely outraged by the 2016 incident. Many questioned Officer Wilson’s claim of not knowing what the tampon was. babycolecole wrote: Bro, you can't lie that a WOMEN as a COP, doesn't know what a tampon is. This is just purely humiliation, like she's doing it on purpose. Not to mention holding it up like a fish in air for 5 male police there. Police be thinking they're the law. Fr. scottsantens brought up the country's obsession with the war on drugs, writing: This is a horror story for women everywhere, and also the direct result of our ridiculous war on drugs plus a culture of authoritarianism within police departments everywhere that has no respect for individual rights. Internal affairs found nothing wrong. Others continued to call for the need to defund the police. makaelaxnoelle tweeted: this woman was sexually assaulted by a female cop. a FEMALE COP was asking if that was a tampon or not. but people swear we can change the system if we just “add more women / gays / BIPOC” defund. abolish. throw the whole fucking thing in the trash. this is disgusting.

A female cop doing this to a woman, with absolutely no reason, in front of a group of male cops is the absolute epitome of “pick me!” behavior. This was solely meant to humiliate the woman and make the male cops laugh.