trending celebrity people lifestyle news animals
Hundreds Of QAnon Fans Turned Up In Texas To Meet JFK Jr. Who Has Been Dead For 20 Years

Hundreds Of QAnon Fans Turned Up In Texas To Meet JFK Jr. Who Has Been Dead For 20 Years 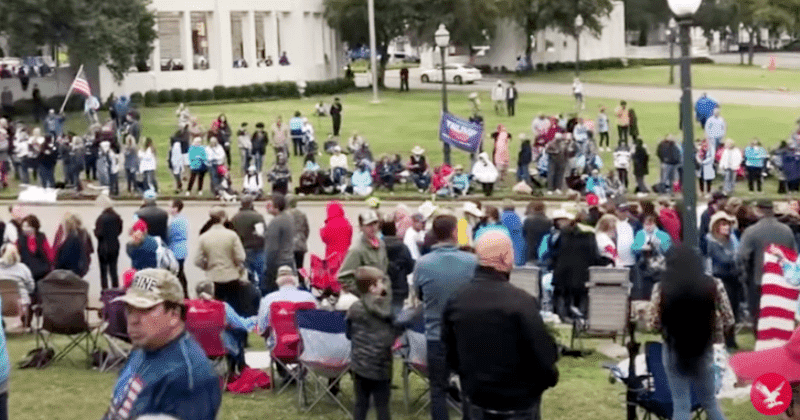 John F. Kennedy Jr. might have died in a plane crash more than 20 years ago but it didn't deter hundreds of QAnon supporters from turning up in Dallas this week to meet JFK Jr., who they believed was reappearing to reinstate Trump as President. The conspiracy theory claimed that Kennedy did not die and was set to 'return' and appoint Trump as President and hundreds of QAnon fans fell for it hook, line, and sinker. Hundreds of people showed up at Dealey Plaza on Tuesday, the place where JFK Jr. Dad was murdered in 1963 anticipating JFK Jr, reported USA Today. The son of former President John F. Kennedy died in 1999 in a plane crash at the age of 38. Man QAnon followers believe JFK Jr. didn't die and is still alive.

There's a sizable crowd of QAnon believers in Dallas's Dealey Plaza, where they're convinced JFK Jr. and plenty of other dead celebrities will return. Lots of talk online about Kobe Bryant and Robin Williams. pic.twitter.com/HG8MgdHLFc

It might have been raining in Dallas but hundreds of QAnon supporters waited patiently lining up along either side of the street with some even bringing chairs anticipating a longer wait. Many of them could be seen wearing T-shirts reading: 'Trump-Kennedy 2024.' Around 12.30 pm, the crowd recited the Pledge of Allegiance before slowly leaving the location. Some even said that Kennedy would turn up at a Rolling Stone concert later in the night, reported The Washington Post.

There were many versions of JFK Jr. returning but they all seem centered on Kennedy reinstating Trump as President. One of them claimed that JFK Jr. would make Trump President before the latter would step down paving way for JFK Jr. to become President and appointing former national security adviser Michael Flynn vice president. QAnon followers continue to maintain that the 2020 Presidential election was stolen despite ample evidence showing that there was no widespread voter fraud as had been suggested by right-wing factions including Republicans.

There is currently a large crowd of what appears to be QAnon believers at the AT&T Discovery Plaza in downtown Dallas. A popular QAnon theory recently is that JFK Jr. of the Kennedy family will be making a big announcement at Dealey Plaza by the grassy knoll sometime tomorrow. pic.twitter.com/8L0Lw09wH7

One of the core QAnon conspiracy theories claims that former President Donald Trump will expose an international cabal of satanic, cannibalistic pedophiles who operate a child sex trafficking ring. This is not the first time a QAnon conspiracy theory has claimed that a reckoning of some sort will reinstate Trump as President with one previously claiming that a "storm: would lead to a roundup of celebrities among others.

The radical nature of QAnon has come under scrutiny during Trump's term culminating in the January 6 insurrection, with motives to attack and even kill Congress members. FBI has designated the conspiracy theories of QAnon a domestic terrorism threat. “The FBI assesses these conspiracy theories very likely will emerge, spread, and evolve in the modern information marketplace, occasionally driving both groups and individual extremists to carry out criminal or violent acts,” read a document of the FBI, reported Yahoo News.

So here's why this JFK Jr. meet-up is so weird, even by Q standards.

Q has explicitly told his followers JFK Jr. is not alive. pic.twitter.com/8vcqeT0K5u

The QAnon conspiracy was started in October 2017 when an anonymous user known as “Q” on the Internet forum 4chan began posting cryptic messages about the imminent arrest of Hillary Clinton. Q claimed to be a high-level government official with privileged access to classified information. Q has claimed that many celebrities including Democrats were part of a secret network of pedophiles.

A QAnon follower explains why she’s in Dallas today. She believes JFK wasn’t assassinated, and the 104-year-old former president is going to help usher in a Trump/JFK Jr. Administration. pic.twitter.com/Xl3PhgayLc

What's worrying many is that the QAnon group now has a life of its own, latching onto random conspiracy theories online despite Q not posting anything since December 2020. Jared Holt, a resident fellow at the Atlantic Council’s Digital Forensic Research Lab who researches domestic extremism, said the gathering showed how deep-rooted the problem was. “It surprised me that as many people showed up as they did for something as specific and outlandish as they did,” said Holt. Even Q had denied that JFK Jr. was alive but that didn't deter the supporters.

“Even though this event is ripe for mockery, and I think people should allow themselves to laugh, I think we need to reconcile with the fact that hundreds of people turn out for a celebrity who has been dead for two decades,” said Holt. “What drove them out to the streets is a kind of a representation of a broader sickness,” he added.