Wearing a mask has been made mandatory in the country since April 5 and made into law in July. 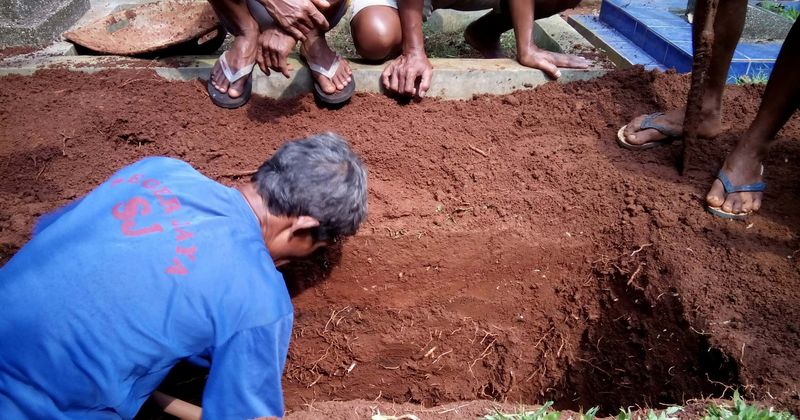 In the East Java province of Indonesia, authorities came up with a rather unique way of punishing those violating an essential protocol during the times of a pandemic - wearing a mask. Eight people who refused to take the precaution were forced by the local authorities to dig graves for those who died due to the dreaded disease, reports sbs.au. The violaters, all men, apparently refused to wear masks in public. The province has been enforcing the wearing of masks since the outbreak in order to stem the increasing number of cases. It was made mandatory in the country since April 5 and made into a law in July with President Joko Widodo declaring a public health emergency as far back as March 31. Indonesia has seen one of the highest positive cases and deaths related to the disease in Southeast Asia.

The punishment for the eight men from Cerme district was a way of making a statement that violators will be made an example of. The head of the district named Suyono said he directed the men to dig graves at a cemetery in a village called Ngabetan. Two people each were assigned to two graves. One of them was required to dig the grave while the other laid wooden boards inside to support the corpse. According to Suyono, while this was a measure to punish people for disobeying the law, it was also a way to work through the shortage of staff for the job. "There are only three available gravediggers at the moment so I thought I might as well put these people to work with them. Hopefully, this can create a deterrent effect against violations," Suyono said.

This is truly a good idea to let these people see the possible consequences of catching this virus.

However, at no point in time were the violaters allowed to come near the corpses or touch them. This was a task that was left to local health officials and medical professionals with full protective gear and body personal protective equipment. Besides the digging of graves as a punishment, there have been other measures used as a deterrent for violators in the country. There were reports in local media about mask violators being forced to sit in a hearse containing a casket. The instruction, while they did this, was to reflect on their actions and to think about why they would want to disobey laws meant to protect them. For business establishments and vendors violating the law, their shops were closed for a short period of time and identity cards were also confiscated.

people who refuse to wear masks in Indonesia are being made to dig graves for coronavirus victims and honestly i’m here for it, UK take note

According to The Jakarta Post, Mohammed Nur Amin, a Cerme Police Chief said the police will cooperate with other government agencies such as the military to enforce the coronavirus protocols strictly, such as dispersing public gatherings and others.  “We urge the public to wear face masks in accordance with the COVID-19 health protocols,” he said.  People commended the measures of the local government in Indonesia and called for similar measures around the world to deal with anti-makers. Louisa Brennan wrote on Facebook: Brilliant, reality for some people...this kind hands on impact for the message to actually sink in.

Indonesia’s coronavirus cases jump by a record as the capital prepares to return to tougher movement restrictions to stem infections https://t.co/qkigQgJuws

She added: All the warning and advice is wasted on some, this will give their brain and hearts a different view about how serious this virus is than they had before they got their hands dirty. Kath Borondy stated in a comment about the story: Great idea. If they don't want to dig a hole, wear a mask, not that hard really. Give some anti-maskers a taste of where they might be heading or where they could be sending others with their selfish actions Should be done worldwide. As of Wednesday, the number of positive cases in Indonesia is 225,030 and the number of deaths stands at 8,965.

COVID-19 Disclaimer: Information about the pandemic is swiftly changing, and Shared is committed to providing the most recent and verified updates in our articles and reportage. However, considering the frequency in developments, some of the information/data in this article may have changed since the time of publication. Therefore, we encourage you to also regularly check online resources from local public health departments, the Centers for Disease Control, and the World Health Organization.