Sharing the news of his union, Khoirul Anam reportedly shared a series of images on Facebook of himself as the groom and a cream-colored rice cooker as his bride. 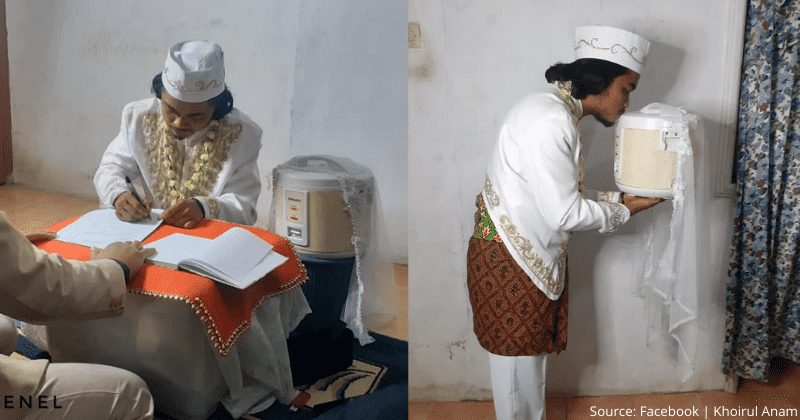 It was a match made in the kitchen for an Indonesian man who decided to marry his rice cooker. There exists many bizarre marriages but Khoirul Anam's relationship definitely takes the cake. Sharing the news of his union, Anam reportedly shared a series of images on Facebook of himself as the groom and a cream-colored rice cooker as his bride. "White, quiet, obedient, doesn't talk much, knows how to cook.. I really want it 😊.. it's really hot.. without you my rice won't be cooked," read the translated caption of the picture where Anam was dressed traditionally and so was the cooker, which donned a sheer white veil.

In one of the pictures they can be seen sitting side by side along with the priest and in another, he kisses his "bride." But that wasn't all, he can also be seen signing marriage papers in one of the images. As expected, these bizarre images went viral on social media but just a few days later, Anam announced a divorce from his rice cooker wife. Explaining the reason behind this decision, he said his wife could only cook rice. As if he didn't know that before diving right into marriage. But people everywhere found this post extremely hilarious.

"Jahidul Islam Khoirul Anam, are you married to a rice cooker? I'm just amazed! After three days, you are (sic) divorced again. Out of curiosity, I found you on Facebook from Bangladesh. So funny," wrote one Facebook user. "Entertainment, I think it's really overseas, haha," shared another. A third expressed, "Wow... times have gone crazy, why are you going crazy too."  According to New18, the whole wedding, and divorce thing was somewhat of a publicity stunt because Anam is apparently a well-known celebrity in Indonesia who part takes in similar skits very often. Looks like the weird post served its purpose of becoming viral and attracting more followers for Anam.

Cold outside, hot inside

When talking about weird weddings, we cannot forget Yuri Tolochko of Kazakhstan who married his sex doll after living with her for a year and a half. Tolochko, who is pansexual and can all in love with "a character, an image, a soul, just a person", reportedly met his Margo at a nightclub and saved her from her attacker. "I like the process of sex itself. And gender, sexual orientation is not particularly important here," he said describing his sexual preference. He also went on to share some personal details of his love life. "Our story turns me on much more than sex itself. I also love BDSM. I love being tortured, I can endure a lot of pain. I love to dominate too. Margo is capable of what other people are not capable of," he said.

They tied the knot in November 2020 but when she went for repair during Christmas, Tolochko ended up cheating on his wife and even tried to meet up with another sex doll. Their relationship ended soon after but he did not disclose why he "broke up with Margo," saying, "I'm not ready to talk about the reasons for the divorce yet." A few months later, it was clear that Tolochko had moved on with a new "lady," which is actually half toy chicken, half-human doll head.

Bodybuilder Divorces Sex Doll Wife After Being Unfaithful to Her (Now He's Marrying Another Sex Doll – With the Body of a Chicken) https://t.co/r3njWWWNww via @worldofwonder

Apparently, he had her custom build based on his preference. "I identify her as a massive chicken," he said in a video introducing his new wife to his Instagram followers. "Let me introduce to you my new wife. This is Lola. Lola [is] queer, she has not yet decided on her sexual and gender identity [she is in search]. Lola has a woman's head, a chicken's body, the navel has depth and can be used as a vagina and a penis inserted into it. I'll show you this one day," he said.