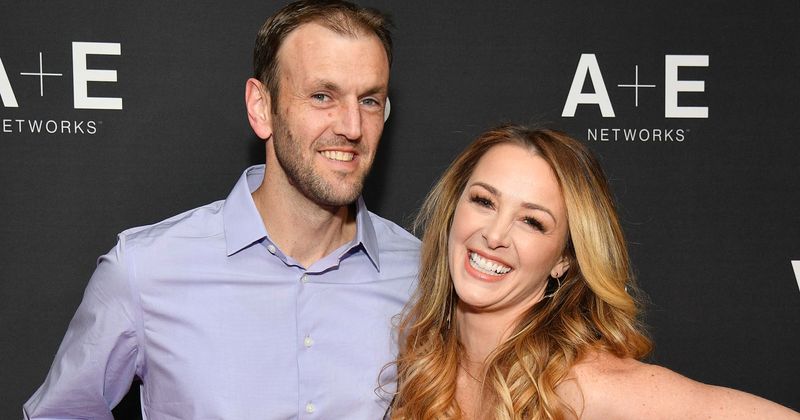 Jamie Otis and Doug Hehner welcomed their baby boy on Wednesday at their New Jersey home at 3:37 p.m., weighing 9 lbs., 4 oz. and measuring 21 inches. Welcome to the world, Hayes Douglas! According to PEOPLE, baby Hayes joins Married at First Sight alums Jamie Otis and Doug Hehner's daughter Henley "Gracie" Grace, who turns 3 in August. "He's so perfect. He looks just like his big sister Gracie," his parents said, adding, "We're in this together. You and me, baby Hayes!"

The couple is starring in the upcoming MAFS spin-off Couples' Cam (premiering May 20 at 8 p.m. on Lifetime). But for now, they're super stoked to be new parents again. Otis, 33, and Hehner, 36, announced the news of the pregnancy in September, revealing the sex of the baby and opening up about the process. "Doug instantly cried tears of joy. Our first baby was a boy, but we lost him at 17 weeks. Of course he loves our daughter, but he's wanted a baby boy so badly for so long. This is truly an answered prayer for us," Otis said. The couple lost their son Johnathan Edward during Otis' pregnancy before welcoming Gracie in August 2017. Otis also suffered a miscarriage at 10 weeks earlier in 2019, and a chemical pregnancy in 2018. So the arrival of little Hayes has truly been a blessing for the couple.

Last month, the two "finally agreed" on the "perfect" name for their baby boy — Hayes — with the then-mom-to-be explaining that they had been "back & forth" about the decision.
"We really like the idea of having H names, but when I found my father through a DNA test (after not knowing him for my whole life) I wanted to honor my dad in some way," Otis said. "I never got the chance to meet him — I found him just a couple months after he passed." Using her dad's family name Rogan would have been "too much too soon" since she is still getting to know her family. But they found the perfect fit anyway.

The couple also discussed why they had chosen home birth. They said that "the pros outweighed the cons." Otis is a labor and delivery nurse so she knows a bit about the subject.
"You learn in nursing school that the safest place is the hospital to have a baby because then they have everything there handy, God forbid [an emergency] happens last minute," she said. Hehner added that the couple "did a ton of research" on home birth before making their decision, explaining, "The fact that I may or may not be able to be a support person at the delivery in the hospital [and] what do we do with our daughter if I can't leave the hospital? At least with our house, we know it's a more controlled environment."

Otis also clarified that she would "never" push a specific birth experience onto another couple. She believes that it's up to each of them to be "educating yourself, and finding out what's best for you and your family." Of course, the pandemic had a part to play in the decision. She said, "What if my baby contracts [the virus] and he's stuck in a hospital in the midst of this pandemic? … It was just a nightmare."

Otis and Hehner are celebrating six years of marriage after meeting as strangers at the altar on the debut season of Lifetime’s Married at First Sight back in 2014. According to The New York Post Jamie and Doug’s wedding on March 23, 2014, was far from a fairy tale. But made great TV.  “I had a panic attack,” said Jamie. A “sweating, twitching” Doug stood at the top of the altar waiting to meet his bride. When she stepped out, he was thrilled, “I couldn’t have been happier, seeing someone that was just absolutely gorgeous,” he said on the show. But Jamie didn't feel the same. “I just happen to be not attracted to the guy,” she said in a voice-over during the wedding. “This is the worst decision of my life.” But things changed. As they got to know each other better, “[I] learned that he was patient and wasn’t pushy,” said Jamie. “Plus, he never made me feel like a bad person for not being immediately attracted [to him]. He never judged me." Doug shared that becoming parents strengthened their bond. “Sharing the responsibility of a child is a whole other level,” he admitted.