People Are Wearing Jewelry Made From Their Dead Loved One's Teeth, Hair, And Bones 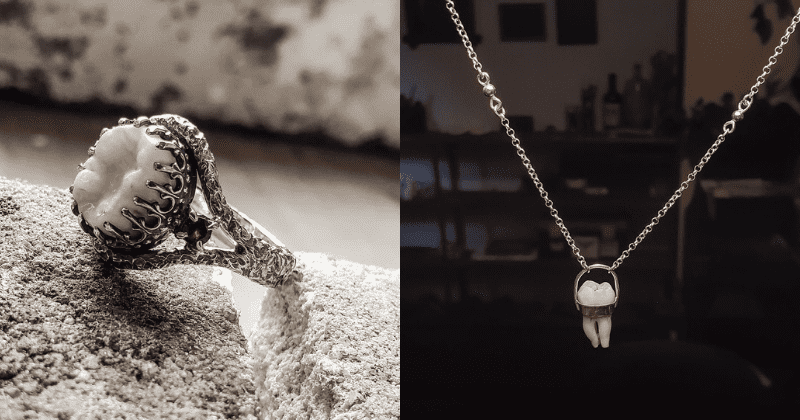 While remembering your loved one who has passed away is one thing, memorializing them by using parts of their body such as teeth and hair is quite another. Jacqui, 27, an artist in Melbourne, Australia, has made a career out of selling jewelry made from teeth, hair, and bones, and even fur (for deceased animals). Her work is so popular that's she's even opened up her own studio specializing in the art.

Her studio, Grave Metallum Jewellery, has quite a following online. Speaking with news.com.au. Jacqui said her love for creating jewelry was always there, but when her best friend died unexpectedly, she decided to channel all her sorrow into something more creative and decided to experiment with the nontraditional stuff. "Creating something elegant with the macabre was my new obsession. While dealing with the grief of my loss, my fascination with death and how we deal with death grew," she said while adding that nothing that makes her happier than helping memorialize the dead.

Because of her love for the macabre, Jacqui has been referred to as a "serial killer" and "Ted Bundy’s Jeweller" and even a "grave robber" but she remains unaffected. From hair to bones and even ashes, Jacqui has created rings, necklaces, brooches, and earrings. But sometimes it's not always the case of memorializing the dead. Her friend once gave her three of her teeth to make into a necklace. Similarly, another customer, sent her one of his teeth to be made into a ring, so he could propose to his girlfriend. She said, "They wanted us to use his tooth so she can always take a part of him with her everywhere."  The end result was "surrounded by a halo of black gemstones called spinel, the tooth has pride of place in the center of the ring, like a giant white diamond."

She works with her clients beforehand to create a piece from the items they send to her. As it's legal to buy and sell human hair and teeth, her orders are never held up at customs. "They will post me what they want in their piece, like a tooth, hair, fur or ashes, and we go from there." Depending on the design, she charges anywhere from $250 to over $1000. It takes her between 14 days to a month to create a masterpiece her clients will love.

Surprisingly, she's not the only one who makes this rather "unique" jewelry. Tracie Fey Zeimba, a Pennsylvania native, is another artist who specializes in this. In one of her posts on Facebook, she shared many pictures of her creation made with teeth. In one, incisors are used in a necklace while in another, a premolar has replaced a gemstone in a ring. But not everyone seems pleased with it. Nancy Allison who commented on Zeimba's post said she was disgusted with even the idea of this art. She wrote, Yucko, that's like all that gross stuff they made out of hair at the turn of the century! Cat Woo added: What in the blue blazes is this 😮what’s next sweaters made from a loved ones hair how do you get the teeth ugh no just no.

Designers like Sam Small, 34, from Auckland, have taken things up a notch by using breast milk, ashes, umbilical cords, and even blood to make her pieces of art reports NZ Herald. Small, who is originally from England, studied 3D design before moving to New Zealand with her husband. She said she had been making "DNA keepsake jewelry" for over two years now and added, "When a pet passes away it's such a tragedy, it's like losing a family member. I get a lot of really grieving people who want pets in pieces of jewelry"

She said further, "Sadly sometimes I get baby blankets or hair from children that have passed away. I don't charge for those, I can't take money off grieving parents."