The father-daughter duo featured in a Super Bowl ad for Scotts Miracle-Gro and the actor said he was overjoyed to star in it with his daughter. 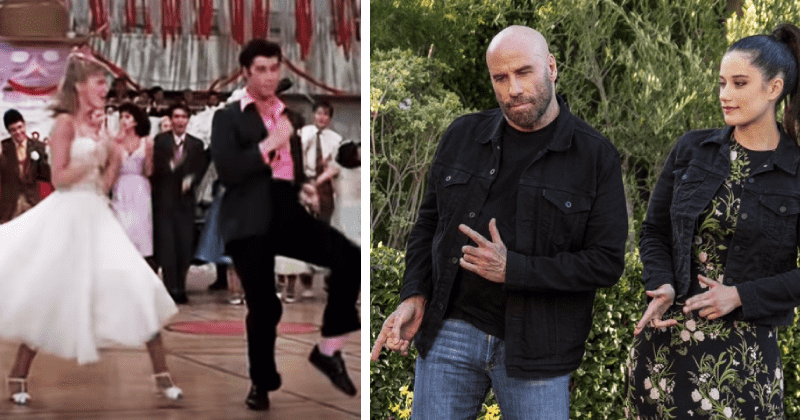 Travolta busted out the moves from Grease along with his daughter in a heartwarming Super Bowl ad. The commercial for Scotts Miracle-Gro sees Travolta, 66, relive some of the iconic dance moves he performed alongside Olivia Newton-John in 1978. Travolta and his daughter Ella can be seen dancing to Surface’s Sunday Best on a lawn in Scotts Miracle-Gro's 45-second spot. The ad also features Martha Stewart and Leslie Baker, who's best known for his role as Stanley in The Office. It starts with the actor trying to set up an iPhone on a tripod as his daughter Ella, 20, watches on and gives him instructions on how to do it. The adorable video shows Travolta stumbling as he tries to set it up. “Dad, it’s the red one,” Ella said. “I know,” he responds while continuing to adjust the phone. “The other red one,” she said. “I know,” he interjects before it cuts to them doing moves from the Born to Hand Jive number.

Ella is the daughter of Travolta and the late Kelly Preston. Preston passed away in July 2020 at the age of 57 following a two-year battle with breast cancer. The pair were married for 28 years and share three children including Ella and son Benjamin. The couple's eldest son Jett passed away in 2009 at the age of 16.

Travolta said he was elated when Scotts Miracle-Gro asked him to feature in their ad along with his daughter. "Super Bowl for me is a major yearly celebration. When Scotts Miracle-Gro asked me to do an ad for the Super Bowl with my daughter I was thrilled, especially since we were asked to dance together," said Travolta. "We had a blast honoring the backyard along with all of these wonderful people, in our Sunday Best for Super Bowl Sunday," wrote Travolta. Ella was just as excited to dance with her Dad, especially as an ode to one of his iconic movies. "Each year I always look forward to watching the Super Bowl and all of the great commercials. When Scotts Miracle-Gro offered my dad and I, this opportunity, I was overjoyed to share this amazing experience — not to mention dance together!" said Ella Travolta. "We are so excited to pay homage to the backyard along with all of these incredible people and are "feeling good" spending time outside on this Super Bowl Sunday."

As the father-daughter duo dance, Martha Stewart can be seen watching on, commenting, " He's still got it." Some of the others who feature in the ad included The Mandalorian actor Carl Weathers, NASCAR driver Kyle Busch, and health and wellness expert Emma Lovewell. Leslie Baker, who's busy grilling in his yard tells them, "Hey, Travoltas, don’t be Tik-ity Tok-ing on my grass." It then cuts the pair dancing after Travolta having successfully set the iPhone to record on the tripod. It's also the brand's first Super Bowl ad and highlights how our backyards have been a haven for the people during the coronavirus pandemic.

It's not the first time a video of John Travolta dancing with his daughter has gone viral. Last August, the actor shared a video of the pair dancing on Instagram. He dedicated it to his wife, who had succumbed to breast cancer in July. “One of Kelly’s favorite things, dancing with me,” wrote the Face-Off actor. Travolta had taken a break from work after the death of his wife. Kelly Preston shared a beautiful tribute to Travolta on their 28th anniversary. "To my dearest Johnny, the most wonderful man I know. You have given me hope when I have felt lost, loved me patiently and unconditionally… made me laugh harder than any other human being possible… shared the most beautiful highs and at times low. With you, I know I will always be okay no matter what happens… I love you forever and completely," wrote Preston on Instagram.