Kate Hudson Honours Her "Pa" Kurt Russell On Father's Day, Shows You Don't Have To Be Biologically Related

The two may not be biologically related but their father-daughter love goes beyond that. 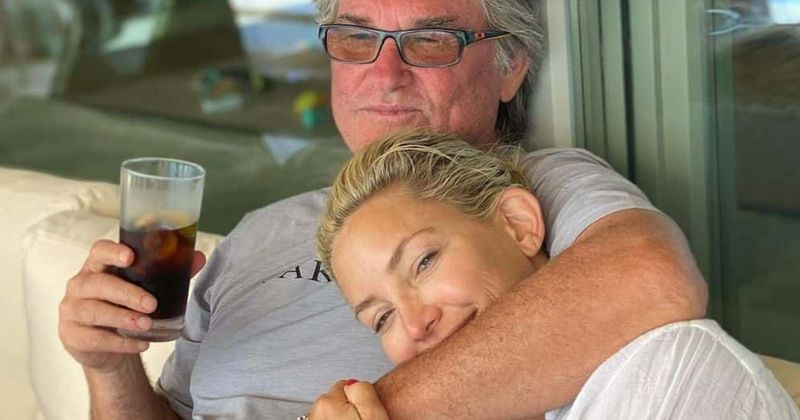 If it's one thing people have learnt over time is that you don't have to be related by blood to have an incredibly strong connection with another human being. Kate Hudson may not be Kurt Russell's biological father but he's been a doting dad to her ever since she was a kid. Singer and actor Bill Hudson had Kate and her brother Oliver Hudson with Goldie Hawn during their marriage from 1976 to 1982. Hawn and Russell have been together since 1983.  Kate and Oliver found a father in Kurt Russell whom Kate even refers to as "Pa." The kids were only 3 and 6 years old when they were introduced to Russell and it was nothing but a journey of love and support ever since.

On their podcast Sibling Revelry the two shared the touching story of how they met "Pa". Oliver said, "there's a really beautiful story ... about when Pa and Ma went on their first date and saw us sleeping." "It was the first time she brought him to the house, it wasn't the first date," said Kate. "Mom said that's when she fell in love with Kurt – right away was because she brought him back to the house and we had already been asleep, and we shared a room... and he sat down next to each of us, he sat down next to you first and watched you sleep and then came by," said Kate who joked that Russell spent more time watching her than her brother because she was "younger and probably cuter." Oliver joked back saying Russell was just trying to "get in Mom's pants, so there's that aspect, so let's go to the daughter a little longer because of the mother-daughter relationship." The siblings admitted that this was the first time their mom saw him as a family man and fell in love with the actor.

Russell and Hawn have been together for 38 years and have never been married. But that didn't stop Kurt Russell from being an incredible dad to Goldie's kids. For 42-year-old Kate her "Pa" has been part of many milestones in her life. For Father's Day she posted a picture of the duo, gushed about Russell and captioned the image:  Our great loyal protector. Our dependable authentic captain. Our wild, sometimes untamed adventurer father! From skiing out of helicopters, flying in open cockpit planes, dirt bikes, bareback horse riding, motorcycle rides, boat racing…a childhood and adulthood of adventure. Our Pa always makes life fun. Always down for exploring, always ready to take on the good life with his family. He’s one hell of a Dad ❤️ Lucky us 🙏 Happy Fathers Day Pa I love you so much. To which mom Goldie Hawn replied: Sweetie this is gorgeous !! And how right you are.

Kate is no stranger to blended families. The actress has 3 children — sons Ryder, 17, and Bingham, 9, and daughter Rani, 2 — all of whom have three different fathers. "I've got multiple dads, I've got kids all over the place," she joked in an interview with Sunday TODAY's Willie Geist  "I think that estrangement is unfortunately quite common," she added, referencing her relationship with her biological father Bill Hudson. "I think it's important for people to talk about that. If they can't reconnect or if it's too challenging, that it's OK, right?" "It's a 41-year-old issue," she continued. "I have a great family. I have a beautiful mother. I have a stepfather who stepped in and played a huge, huge part in sharing what it is to have a dependable father figure in our life. But it doesn't take away from the fact that we didn't know our dad. I think as I've sort of gone through that process ... I kind of look at my dad and I'm, like, 'You know, the love has never ever gone anywhere. It's always been there, no matter what those complications have been. And healing is ... personal, and I think people sometimes just need to hear that they're not alone in that."

Few years ago when Oliver shared a throwback photo of the Kate and Bill and himself of them he captioned it “Happy abandonment day." Bill Hudson told Larry King in 2018 it was just supposed to be “darkly comedic”, reports Cheat Sheet. Kate shared a photo her and Kurt at the time saying “Pa… I love you to the moon and back". In an interview with Inside Edition, speaking of Oliver and Kate’s Father’s Day posts, Bill said, “It makes me feel horrible. If that’s what it takes to make you feel better, then change your name to Russell. It doesn’t mean I love you any less. It doesn’t mean I wouldn’t want this to go away. Doesn’t mean that I wouldn’t want to resolve this, but shut up already.”