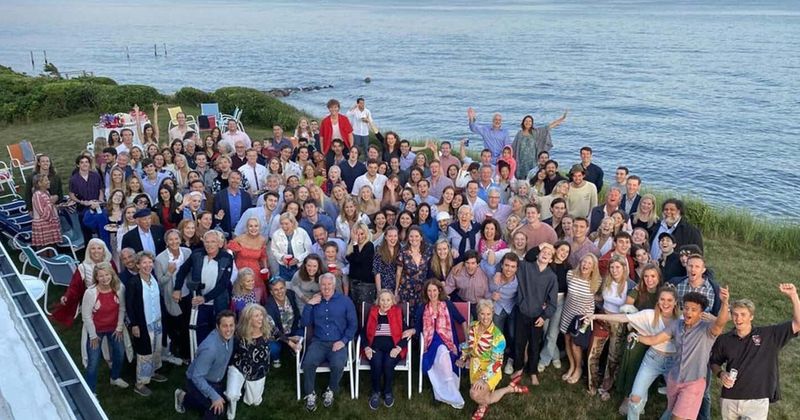 Dozens of the Kennedy clan came together for a Fourth of July celebration where they captured their annual group photo while standing near the water on the family's estate in Hyannis Port, Massachusetts. Kerry Kennedy, daughter of former United States Attorney General Robert F. Kennedy, shared the image on Instagram captioning it:  Happy Fourth of July from our family (and friends) to yours! If you're wondering where Chris Pratt is, it remains unclear whether the actor was pictured this year with his wife Katherine Schwarzenegger, reports PEOPLE. Back in 2019, Pratt was spotted toward the back of the shot next to his wife with a big smile on his face. The Guardians of the Galaxy star married into the Kennedys when he tied the knot with Schwarzenegger, whose great uncle was John F. Kennedy. Katherine's parents are Arnold Schwarzenegger and Maria Shriver.

According to The Daily Mail, Kerry Kennedy's daughters Mariah and Michaela Kennedy-Cuomo also shared photos from the family weekend on the Cape. Robert F. Kennedy Jr.'s daughter Kyra did the same as well. The Fourth of July celebrations in Hyannis Port is a Kennedy family tradition; multiple generations of the Kennedys have been paying tribute to the special day for decades where they enjoy boat rides and the annual parade.

The family members' personal lives have also been in the spotlight recently. Michaela opened up about her sexuality over the weekend. A month prior, she came out as queer on social media. At the time, she was worried if she would be seen as "attention-seeking," since it's "hip or cool to not be hetero in my liberal bubble." During a live stream with Donato Tramuto, the former CEO of Tivity Health, she said that she is demisexual, a term used by people on the asexual spectrum who typically experience sexual attraction towards people with whom they've developed a close, emotional bond. "When I was in elementary school, I feared that I was lesbian. When I was in middle school, I came out to my family and close friends as bisexual. When I was in high school, I discovered pansexuality and thought, 'That's the flag for me'. And I've recently learned more about demisexuality, and have believed that that identity resonates with me most," she explained.

Also spotted in this year's family photo is Conor Kennedy, Robert F. Kennedy's grandson, and his girlfriend Ava Dash, who is a model. Taylor Swift and Conor Kennedy dated in summer 2012. Now it seems the  26-year-old is dating Dash, 21. The two made their first public outing as a couple last month, appearing at an LGBTQ+ fundraiser in the Hamptons. The pair have been dating for months, a source told PEOPLE at the time. They apparently met in 2019 through mutual friends, but they "never really bonded until they both stayed at a friend's house in the Hamptons for Conor's birthday weekend last August." "Normally there are so many other friends around, but since it was just them at the house I think they really got to connect," the source said. "After that weekend, they had flown back to L.A. together and have officially been dating for around seven months." Andrew Warren, a New York socialite who co-hosted the event, shared, "They are both really good people and amazing friends and I hope they end up together, not just because I love them both but because I can tell they're both genuinely happy."

Dash is the daughter of Roc-A-Fella co-founder Damon Dash and designer Rachel Roy, reports E! News. "Conor and Ava were so lovely together and dancing with each other the whole night," a source told the outlet. "They helped set up for the event and are two of the most kind and down-to-earth people. You can really see how in love they are and how comfortable and close they are."