After Kids Destroy Duck’s Nest, Woman Saves Cracked Egg By Carrying It In Her Bra For 35 Days

She kept it in her bra and took it out only while showering. She asked her husband to hold onto the egg while she took a bath. 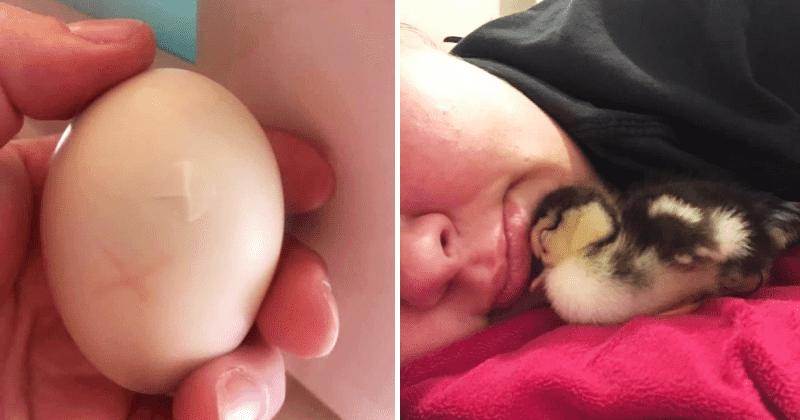 Betsy Ross was out with her kids and her husband to play pickleball at a local park when they stumbled upon a duck nest that was destroyed. Ross' kids were distraught at the sight of the smashed eggs but they noticed that one was intact but had a slight crack in it. They pleaded with their mother to save the egg. Ross took a closer look at the egg and found that it wasn't leaking and appeared largely intact. She picked up the egg and made up her mind to do everything in power to protect the egg. She took the egg home from the park in Visalia, California.

Ross asked the local wildlife organization if they would take in an egg, but they said no. They promised to take in the duckling if it hatched. “I really didn’t think I had a chance of saving it because I’ve never hatched an egg,” said Ross, reported Bored Panda. She knew she couldn't afford an incubator to help the egg hatch, so she started researching other ways to help the egg hatch. Betsy Ross knew the egg needed warmth and humidity but went in a rather unconventional direction way to hatch the egg. She kept the egg in her bra. “My boobs sweat in heat (gross I know),” said Ross. “I carried it in my bra for 35 days and slept with it there as well. I’m a plus size girl so it just kinda fit right between my breast,” said Ross. She would rotate the egg 4-5 times a day to ensure the heat was evenly distributed on the egg.

Ross interprets sign language for a living works as an independent contractor. She usually gets odd jobs during summer but she didn't work this summer, which helped her be a 'full-time Mom' to the duckling. The only time she removed the egg from her bra was when she had to go shower. She would ask her husband to hold it. She figured it would be ok, considering 'Mom ducks' often leave to get food during the hatching process. She did more research as the days passed and realized that she needed to stop rotating the egg and it needed a lot more humidity. She devised a new plan and got a lamp, a plastic container, gallon baggies, a bowl of water, and a lot of tape. She made a hatching box by herself.

“At 35 days, I started hearing faint peeps which the internet said was called pipping and its beak was pushing out of the lining,” said Ross. She moved the egg to the box. She started to get worried and sensed something was wrong. She called the vet and found out the duckling was being shrink-wrapped by the membrane in the egg. The vet asked her to slowly peel away the shell away while avoiding veins. She was asked to take special care about the duckling's nose, ensuring that he could breathe. She followed the vet's instructions to a tee. Soon, it was time for the egg to fully hatch but the duckling got only halfway out and was still connected to the yolk on the bottom of the egg.

She was told it was because the duckling was hatching prematurely but a Reddit thread said it was because the egg was not warm enough or the temperature not being stable. “I got a wet paper towel and wrapped it around the shell with the yolk and put Neosporin on it so it wouldn’t get infected. Maybe not the best idea but I was scared,” said Ross. The duckling absorbed the yolk but was really weak and couldn't stand by itself or even move. Ross refused to give up on the duckling and tried to help him stand and gave it water. One day, when the family woke up, they found the duckling, taking everyone by surprise, was walking about, and looked perfectly healthy.

The duckling grew stronger and was soon swimming in bathtubs and mud puddles. Ross said the duckling would nap with her during the day. She took the duckling with her wherever she went, in a little carrier. Ross said the duckling could recognize her voice and "lose it and scream" when he heard her. "He seemed to know when I left without him because my husband complained that he would sit and cry,” said Ross. She eventually moved him to the farm nearby where the duck has fully adapted to. She shared her story on Reddit along with the cute pictures of the duck.