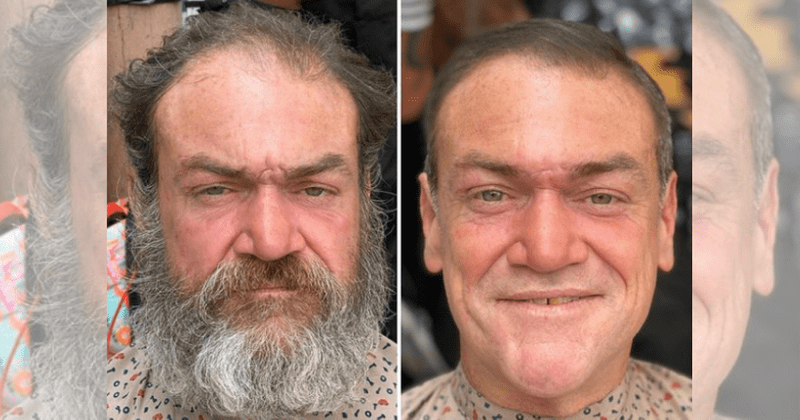 Being homeless and down in the dumps with drug addiction is something that Los Angeles-based barber, Jason Schneidman knows all too well. He lived that life for a while. “I was homeless for two years. When I was in the streets and addicted to drugs I was very alone and felt very disconnected,” he told Good Morning America. But Schneidman knows it just takes one kind act to instill confidence in such people and to set them up on a journey towards recovery. After four stints at rehabilitation centers, he gave it all up and began working with other addicts. At the same time, he was started plying his trade as a barber. “I was taught I had to be of service [to other addicts] to keep my sobriety,” Schneidman said. “I was working a lot and wasn’t feeling good about the work I was doing to give back.” Then during one gig when he was hired to do makeovers, he knew what he wanted to do. One of his clients was a homeless alcoholic. Schneidman said, “That one really stuck with me. One day it came to me like, ‘Oh my God, that’s what I’m supposed to do.’”

One day he decided to go out with his business partner to Hollywood Boulevard armed with cordless clippers and their backpacks. They asked the homeless there if they needed haircuts. The response was immense. After numerous haircuts to the homeless and needy, Schneidman is still going strong. He founded the nonprofit, THEMENSGROOMER, which has become sort of a movement. These days he hosts most of his event at Venice Beach, and apart from haircuts, he gives people food and donations. One of the things he does while giving haircuts to the homeless is he talks to them. He said, “It’s intimidating to see people who are homeless. People look scary. They look dirty. They’re still people. They’re people’s sons and daughters who have lost their way. I think it really shows them that they are human. They can make their way back. They’re not a lost cause."

Schneidman puts up before and after pictures of his pro-bono clients on his popular Instagram page and the transformations are amazing. He also takes care to put their touching stories and how they became homeless, effectively humanizing the problem of homelessness, alcoholism, and drug addiction. We've shared some of these pictures and stories below. If ever any of you feel you can't make a difference, know even a small act of kindness can go a long way.  As Schneidman puts it in THEMENSGROOMER website, "A Haircut Can Change Someone's Life."