The 6-year-old's mom was blown away by their heartwarming interaction. 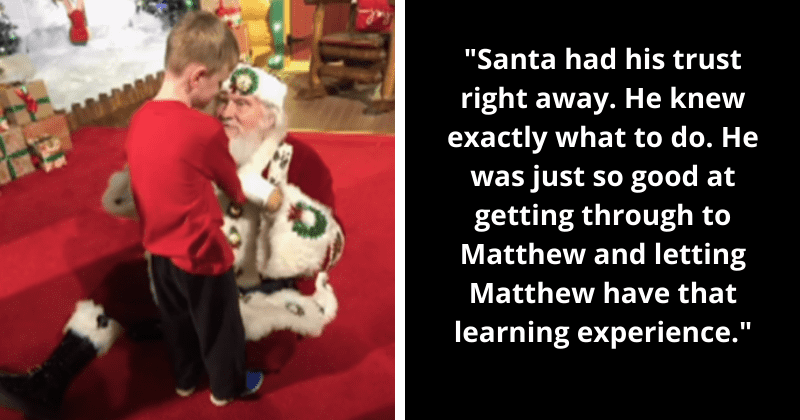 We could hear more stories like this now that the festive season of Christmas is here! A 6-year-old boy from North Texas had a magical Christmas moment with Santa at Cabela's in Fort Worth. Matthew Wolf, who is blind and autistic, arrived with his family to meet Santa Clause in person. His mom Misty decided to come in early to avoid unwanted attention if the situation became too much for Matthew or his younger sister, 20-month-old Lilly. But the good news was that "Santa had his trust right away," she said, in an interview with CNN.

Santa Claus crawls on the floor to help a blind boy with autism feel the Christmas spirit https://t.co/ED3AhLKfbJ pic.twitter.com/myEk921aJy

Misty said Matthew does talk, but he doesn't interact with people unless he feels comfortable with them. He also hates posing for pictures. But there was something about this special Santa at the store that made Matthew feel at ease. "Santa had his trust right away," she said. "I keep saying that he met the real Santa. That was the real Santa for Matthew." When Misty approached Santa to explain that Matthew is blind and autistic, he said "Say no more." He immediately got down on the floor to be at Matthew's level and greeted him. "He knew exactly what to do," she said. "He was just so good at getting through to Matthew and letting Matthew have that learning experience." Santa also let the little boy feel his facial features and coat, its buttons and his hat and explained what he was feeling. He even carried the 6-year-old over to a taxidermied animal in the display to touch its antlers. Matthew even got to pull on Saint Nick's beard.

Oh my heart! Angels amongst us!
https://t.co/aZ9kV6WpeP

When asked what else he wanted to feel, Matthew said “your eyes that twinkle,” quoting directly from the story the six-year-old loves so much: Twas the Night Before Christmas is one of Matthews favorite books. Misty was a bit worried whether the magical moment would be short-lived when Santa asked Matthew to sit with him for a picture. But to her surprise, the little boy agreed! "I was just waiting for the meltdown at that point and as soon as he said yes, my jaw just dropped," she said. "His sister gave the Grinch face, but this time around Matthew was actually looking at the camera and head up and everything. I need Santa in my life for family pictures."

Thank you, Santa for bringing the magic of Christmas to this child 🎅

The interaction probably took around 10 minutes but the impression it left behind will last a lifetime for this family. Santa told KTVT every child's visit is special to him. "You relate to the child and what the child needs," Santa said. "He has never seen the world the way we have seen the world." Matthew had been asking questions and talking about the encounter all week; it's amazing how Santa knew exactly what to do. “It was definitely a moment when I was all teared up,” said Misty. “You know, Santa is the magic of Christmas.”

Misty also shared the encounter on Facebook, recalling: Best Santa ever!I whispered to Santa “he is blind and autistic and is very interested in Santa”. He said “say no more” and immediately got down on the floor to greet my little man.He talked to Matthew for a long time. Let him feel all over him. Told him to pull his beard, feel his hat and talked about his red suit. He asked Matthew if he wanted to feel anything and Matthew said “your eyes that twinkle” (from the poem ‘twas the night before Christmas) so santa let him touch all over his eyes for as long as Matthew wanted. Then Santa said have you ever felt a real reindeer. Santa then carried him over to the display area. And had Matthew pet the taxidermy reindeer they had set up. It was great. My heart was full seeing Matthew so interested. Many left sweet messages in response to the heartwarming story. Vanessa Simons wrote: These photos are magical. I wish mathew a very happy Christmas. Well done Santa you are doing an amazing job. Merry christmas

DEAR SANTA: A family in Fort Worth, Texas, is grateful to Santa Claus after he helped a little boy who was born blind and autistic, see and experience Christmas one magical moment at a time. @DavidMuir reports. #PersonOfTheWeek https://t.co/rhmfH8rQnB pic.twitter.com/wS5Pstta8j