In the video, we can also see several members of the police force shouting 'go inside now' to keep the residents off the streets. 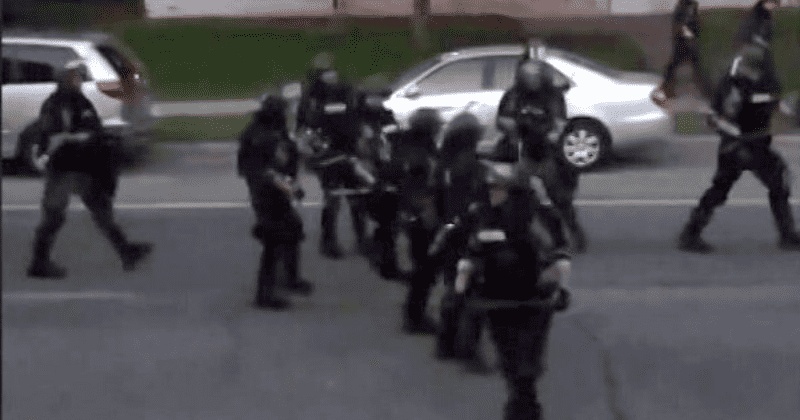 Many believe the ongoing George Floyd protests have pushed the United States of America towards becoming a dystopian police state. Although the deployment of police forces and the National Guard makes sense when it comes to stomp out looting and destruction of property, however, they are using the opportunity to shoot at citizens on their own porch points to gross misuse of power. According to Fox9, law enforcement officers in Minneapolis were caught on camera firing several paint rounds at civilians standing on the first-floor porch of their own property and it has enraged millions of people already.

The footage shot on a cellphone shows an armored truck pull up along the Whittier neighborhood and over two dozen officers and law enforcement follow behind. The police appear to be patrolling the street at the height of the George Floyd protests on Saturday in an attempt to enforce the new late-night curfew announced by Minneapolis Mayor Jacob Frey on Friday, May 29. This curfew prohibits civilians from stepping into public spaces between 8 p.m. and 6 a.m. In the video, we can see several members of the police force shouting 'go inside now' to let residents go off the streets. Tanya Kerssen, the woman who captured the video, is accompanied by a few of her friends who are watching the event unfold from their porch. Even though they were standing on their own property, an officer can be heard shouting 'light 'em up'.

The police had no right to tell people on their property, presenting no danger, to “go inside” since there is no martial law. Firing a device at unarmed and non-aggressive citizens is a total violation and crime in itself. America is falling apart!

As soon as the instruction is given, at least two officers fired several rounds of paint projectiles at the group. After one appears to be hit with the projectile, Kerssen and the group rush inside as the officers continue to yell outside. Luckily, for them, nobody was injured from the incident. Kerssen took to Twitter and uploaded the video with the title 'Share widely: National guard and MPD sweeping our residential street. Shooting paint canisters at us on our own front porch. Yelling “light em up”.'

Them hollering to people to "GET INSIDE! NOW!" and shooting at them on their own property is something I've never seen. It's chilling as hell.

The incident has thrown light on the gross overreach of power as the curfew does not extend to private properties and it is only limited to public roads. According to the Mayor's orders: "A nighttime curfew is imposed on all public places within the City of Minneapolis, including streets...during curfew hours, all persons must not travel on any public street or in any public place." According to a statement on Fox 9, the National Guard said their soldiers were not a party to this incident. "The enforcement officers in this tweet are not members of the Minnesota National Guard," it said.  People on Twitter have come up with a multitude of views with some seeming to side with the armed force and blaming the residents for not going inside as instructed while others argued the group was within its right to stand on the porch as per the curfew order.

For anyone defending this and saying “They didn’t obey orders,” there better not be ANY tweets supporting the pandemic protestors on your timeline.

A user named This Panther eats Pigs wrote: "Where was this energy when we were telling ppl to stay home during quarantine? Ya'll sure can chase black folks in the house for protesting the murders of our people, but you can't lift a finger against white folks wanting their hair/nails done? Fuckin' wild. "Light em up." Another user, Mark Gilbert wrote: "Those people were completely obeying the curfew order by remaining on their porch. It prohibits "travel on public streets or in any public place." That does NOT include their front porch. F*cking cops should read the order they think they're enforcing." Scott Dworkin wrote: "Whoever shot at you needs to be arrested and dishonorably discharged."

Wow, police everywhere are awfully determined to turn all of us against them. I was one of the most pro-police ppl ever but they've managed to drive me to the opposite side of the scale. Enough with the damn god-complex and power-high.

The protests which began nearly a month ago have continued to divide the nation with either side refusing to back down from its stance, leading to a continued rise in violence.

I’ll bet the same people who are like “They told you to go inside” are the same ones preaching that being made to wear a mask violates their civil rights pic.twitter.com/orHDQvDWnG

Disclaimer : The views expressed in this article belong to the writer and are not necessarily shared by shared.com