This is the second marriage for the reality tv star, who first exchanged vows with Matt in 1987. 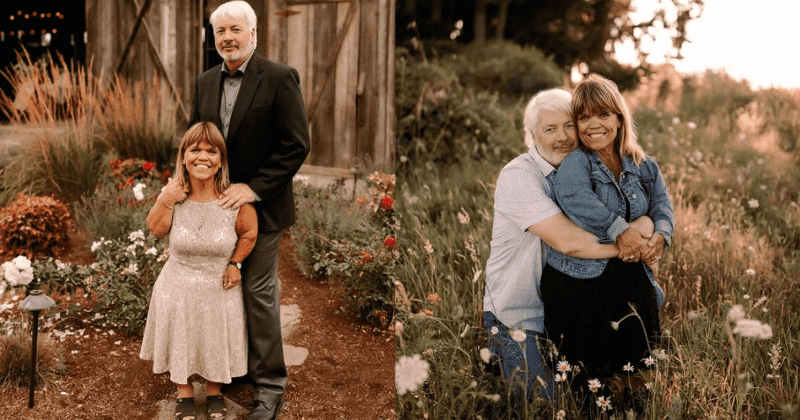 It's official! Amy Roloff and Chris Marek are now husband and wife! The Little People, Big World, tied the knot with her 55-year-old fiance on Saturday while being surrounded by 146 of their closest family members and friends. The nuptials, which were officiated by Michael Williams, unfolded in front of a gazebo at Roloff Farms in Hillsboro, Oregon, which belongs to the 56-year-old former husband, Matt Roloff. Amy walked down the aisle to Heart to Heart, a song composed by Marek's best man, Rick Hinkles, reports PEOPLE. She stunned everyone in a gorgeous dress from Justin Alexander's Sincerity Collection, while her beau looked dashing in a black suit.

The beautiful wedding was followed by a memorable reception that took place in a tent outside. The Macey Gard Band performed during the event and even played its song At the End of the Day, for the newly wedded couple's first dance. While the celebration of their marriage was a success, Amy noted that it was the promise of love that the two had made to each other was all that really mattered. "Our wedding day is a special day, but our marriage is a lifetime together," she said, adding, "I'll have the rest of my life with Chris and that makes me smile."

Speaking of the difficulties the pair faced while planning their big day, Amy said, "[It was challenging] planning a traditional wedding and all that typically goes into that, to what we want to have at our wedding. Sometimes it felt like the two clashed at times for me. But in the end, it's about the two of us — Chris and I. It's about combining our two lives together into one and sharing it with our family and friends." Amy previously said that her family helped a lot to pull off the wedding ceremony. "They all have been wonderful," she shared.

"They've been helping me all this week with setting up and, most importantly, moral support. Having my grandkids be a part of our wedding day is so special to me. To know that they are happy for me means so much to me," she added. In the days leading up to the wedding, Amy said she intended on indulging in a little self-care in the morning before her big day. "I'm going to write in my journal and read some devotions. Write my vows. Look at photos of Chris and I and think about where we started to where we are now and how wonderful it has been," she said of her pre-wedding plans.

This is the second marriage for the reality tv star, who first exchanged vows with Matt in 1987. The pair shares fraternal twins Zachary and Jeremy, 31, Jacob, 24, and Molly, 27. After filing for divorce in 2015, had resigned herself to just dating and having a good time. This was until she met Marek, the man of her dreams. "It was a pool party, and "[Chris and I] got to talking and he invited me to go on a motorcycle ride," recalled the new bride in an episode which aired on December 2016. "Oh, I'm having a ball!" As things began getting serious between the two, Amy said, "I just never thought someone who is average size would be interested in me," per a TLC clip from June 2017.

"I just really want him to never question or doubt the relationship because I’m a little person... I just have a good time. I have fun with him. I never thought I’d be dating as a grandma, and it’s nice to experience that and be with someone," she added. Three years later, the lovebirds were ready to settle down and Marek pulled all stops to sweep Amy off her feet with a giddy proposal. "I cried, he had tears and of course I said YES! I’m engaged and couldn’t be happier," she said of the proposal. "I love this man so much... I’m blessed. I’m happy. I’m so looking forward to continuing our life journey together."

Following the announcement of the engagement, the pair decided to have their wedding at the Roloff Farms, which has been Amy's home for 30 years. Although the property is soley owned by Matt, the couple chose it as the venue due to logistical challenges posed by the pandemic. "COVID came into play because I think a lot of people either changed or canceled and moved whatever was going on in 2020 to 2021, so other places just kind of eroded away and plan B became plan A," she said in June. "The farm has beautiful scenery and we just don't know what's going to happen with COVID. So it's easier to have it there."