The leading right-of-center online communications operative, who has worked with Republican Rick Perry and Rand Paul found herself in a world of hurt as people as strangers began accusing her of psychological child abuse. 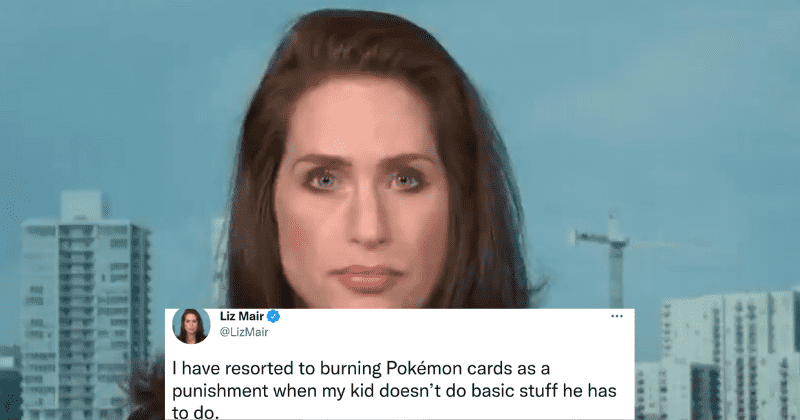 A communications strategist for the right-wing was blasted on Twitter after she shared her controversial parenting techniques with her nearly 50,000 followers. Liz Mair revealed that she burns her kid's Pokémon cards when he fusses with his food. "I have resorted to burning Pokémon cards as a punishment when my kid doesn’t do basic stuff he has to do," she tweeted. In a follow-up post, she elaborated on what these "basic stuff" comprised of. "The basic stuff is eating," wrote Mair. "He comes home without having eaten any of his lunch? Card burnt. He doesn’t eat enough dinner? Card burnt. Bear in mind my kid is about 4’6” tall at age 7 and yet weighs less than 55 pounds. He needs to put some weight on, specifically muscle."

Save the valuable ones so they can pay for therapy when they’re older.

The leading right-of-center online communications operative, who has worked with Republican Rick Perry and Rand Paul found herself in a world of hurt as people as strangers began accusing her of psychological child abuse. While not eating enough food is a common issue among children, experts in child development have emphasized that punishing kids for not eating could ultimately lead to long-term damage in their relationship with food. In severe cases, it could even result in eating disorders.

Not sure why you felt like sharing that you’re emotionally abusing your kid with the world.

As for burning a child's playthings as punishment for their behavior is not advisable and many even consider it as a form of physical abuse. Damaging his cards just for not eating enough dinner seemed to be a ridiculous reason for the Twitterverse. "People eat when they’re hungry. If your child has an inability to eat, or is not feeling very hungry as often as he probably should, this is something that needs to be discussed with a pediatrician. Punishing him for his appetite is literally insane," shared one user. "The food that I came to associate with getting in trouble for not eating it…is the food that, 30 years later, I still can’t go near. This woman really thinks she did something by punishing her kid. Cool. Win the battle (maybe), lose the war, and maybe fuck your kid up mentally," wrote another.

The responses to the tweet… God people are soft on their kids and think things like not eating when you do sports 7 days a week is somehow just fine and healthy.

Following the unexpected backlash, Mair attempt do some damage control by retweeting some of her posts and claiming that she was just "trolling" people because she was bored. "This website is getting to be really boring. I’m starting to consider tweeting deliberately crazy and offensive stuff just to try to spice it up again," read the post. Mair assured people that she was only joking about the alleged child abuse but not many are buying it. "Haha, I acted like a child abuser, and people treated me like a child abuser in response! This says a lot about society, I am doing valuable things here!" shared @Trashfirekitten.

Wait NOW you’re using “I was joking” as cover after engaging with people about it in detail all morning? very believable lol pic.twitter.com/6OUvGCjP82

Some were extremely worried about her child and hoped that CPS paid the family a visit soon. "Incredulous someone with a blue check just openly admitted to emotionally abusing her child over…not eating lunch. Even if it were an act worthy of punishment, maybe put the cards on top of the fridge for now or something. Someone call CPS bc who knows what she’s doing quietly!" expressed @GenXVotes. "Upon looking at some things this person has tweeted in the last 24 hours, it’s clear this is supposed to be a joke. The problem is that it isn’t. There are so many kids out there with food insecurities and to post crap like this and then pretend it’s a joke is just gross," shared @phoenix329.

Liz Mair is terrible at communicating basic ideas to a child and resorts to bananas threats and behavior? wow weird would never have seen that coming.

Mair later told The Wrap, "While me and my box of matches are no real threat to Pokémon cards (the fire department and everyone on Twitter can rest easy on that front), I will admit to failing to land a lot of jokes and pranks and such over the course of my 43 years," She added, "Clearly, there’s a reason I’ve never been asked to guest-host SNL…"