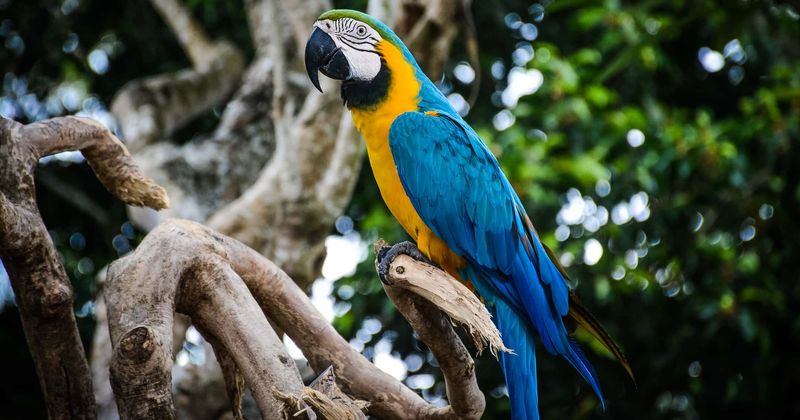 Juliet, a blue and yellow wild macaw in Rio di Janeiro is probably the last of its kind in the city. Known for their beautiful and bright plumage, wild macaws are known to be social creatures. Therefore, it's heartbreaking to know that Juliet has been visiting the BioParque out of loneliness and seeks the company of captive macaws. For the last 20 years, Juliet faithfully swoops down to the zoo and heads for macaw enclosure. Zookeepers have witnessed grooming behavior from it and other times it just sits there to enjoy their company. Neiva Guedes, president of the Hyacinth Macaw Institute, an environmental group noted that Juliet "very probably feels lonely, and for that reason goes to the enclosure to communicate and interact" according to ABC News

Others like biologist Angelita Capobianco are cautious about Juliet's behavior. "We don't want to project human feelings. I look at the animal, and see an animal at ease." She did acknowledge that Juliet has never exhibited behavior to indicate disturbance and should be left free to do what it wants. She said, "Who am I to decide it should only stay here? I won't. It comes and goes, and its feathers are beautiful." Scientists are not even sure what gender Juliet is since it's difficult to infer the same just by looking at the species. Detailed blood tests and feather analysis is required to determine its sex. Ideally, Juliet should have found a mate years earlier and probably even had her own. The birds usually have a lifespan of 35 years.  Guedes added, "They're social birds, and that means they don't like to live alone, whether in nature or captivity. They need company."

Lafebar reports about the birds' friendly nature. They stated: "Macaws are a force to be reckoned with.  Everything about them is big, from their voices to their attitudes.  Even the mini macaws are big … on the inside! Colorful and often raucous, they call attention to themselves even when quiet.  Although, to the uninitiated, macaws seem formidable and may bluster and carry on, those who share their lives with these magnificent friends know that they contain surprisingly soft and loving hearts and sensitive natures.  Macaw people adore their great friends to the very core of their being … and for good reason."

The last sighting of a blue and yellow wild macaw in the city was back in 1818 by an Austrian naturalist. There are no other types of macaws in the city. They are found in other parts of the country such as the Amazon and few other states. Experts suspect Juliet might have escaped from captivity. While blue and yellow macaws might no longer be common in the city, the zoo is introducing an initiative called the Refauna, where certain species are introduced into protected spaces to rebuild their ecosystems, one of them being the blue-and-yellow wild macaws. This is in association with universities and other institutes. After the young ones are raised, they will be released into Rio Tijuca Forest National Park. This is where Juliet has been sighted and is believed to sleep each night.

"Their role could be important in terms of ecosystem and reforestation. It's a big animal with big beak that can crack the biggest seeds, and not all birds can. The idea is for it to start dispersing those seeds, complementing forest animals that can't," said Marcelo Rheingantz, a biologist from the Federal University, Rio de Janeiro and Refauna's technical coordinator.