trending celebrity people lifestyle news animals
Lorretta Lynn And Kid Rock Did NOT Get Married. "It's A Joke"

Lorretta Lynn And Kid Rock Did NOT Get Married. "It's A Joke" 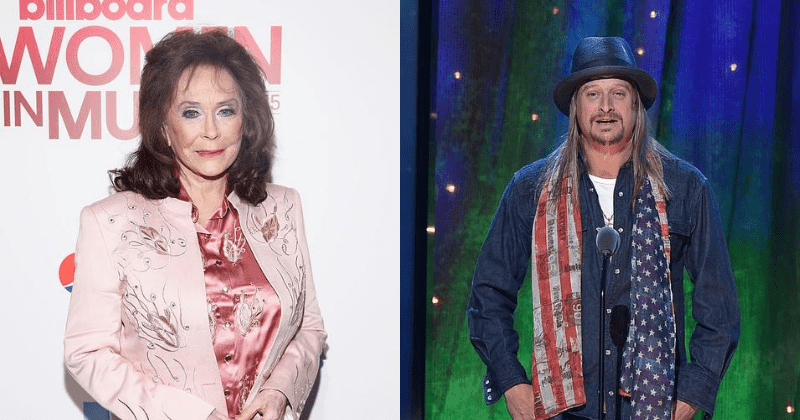 The news about country singer Loretta Lynn marrying Kid Rock on August 31 is reportedly a joke, the country star's representatives confirmed to E! News. It all began when Lynn and Kid Rock were spotted together at her son's Ernest vow renewal ceremony with his wife. Lynn posted a series of pictures late Sunday night where Rock put a ring on her finger as she wore a veil and Rock got on one knee and the two held hands minutes after. What a weekend! Lynn posted on Instagram. My Ernizzzzze & Crystal renewed their vows this weekend. It was beautiful and everything it should be. Marriage isn't always easy--heck it's not even always pretty, but love holds you together and you push through the bad days to enjoy the good ones. I'm so proud of them and wish them years of happiness. The 88-year-old singer noted that "things got crazy".  She added, My boy @kidrock was there and we've always teased about getting ourselves married. Well, the preacher was already there so we had some fun with it. Sorry girls, he's taken now!

Lynn included the hashtags #gottahavesomefun #88andfeelinggreat #laugh #tabloidfodder and #cougar. Soon, fans began congratulating the couple.Tayla Lynn, the singer's granddaughter also put up a post on the "wedding" stating Kid Rock was only there to officiate Ernest and Crystal's ceremony and he was surprised by a preacher when he was set to perform a song. "Now you must understand how close Kid and Memaw have gotten.  she wrote. Like they adore each other. They joke around all the time about getting married and saying to heck with the rest of em. So Dad and Crystal decide to make that happen! They have the preacher announce that he’s ready to do the vows now!

Lynn and Kid Rock reportedly became "giddy" "like school kids," at this point before confirming that the marriage was "obv a joke." Tayla continued: They were so caught off guard but both so happy. They played along. (Cause obv it’s a joke) Unc (Tim Cobb) even had the veil ready. We all Laughed, sang, hugged. It was a moment last night in the midst of the world turning sideways where love and joy were absolutely shared. Before things got out of hand, Lynn's representative told E! News. "It's a joke! They always tease each other saying they should just get married! Loretta is so witty and funny! She's gotten pretty savvy with social media. She loves hashtags. When they were planning this practical joke she insisted on using the hashtag cougar! If you're going to follow anyone in 2020 it should be Loretta."

NO! They were joking aroundhttps://t.co/gnNFUdlkzu

The Coalminer's Daughter singer herself broke the news on Facebook and set the record straight. In a post, she wrote: Well, it didn't last long, y'all but it sure was fun! I guess I better get on here and let y'all know that it was just a joke—Kid Rock and I didn't get married over the weekend, but we had a blast. #rockon #relaxoutthere #easymediafolks #calmdown #funtimes #whatwillshedonext. The cruel prank Lynn and Rock played broke many fans' hearts as some had even begun celebrating the ceremony with plenty of them even taking to social media to congratulate the "newlyweds". Lola Rae, however, thought this was a proper 2020 moment as she wrote: Did Loretta Lynn and Kid Rock really get married? What is 2020? And who still uses Twitter?