The wax replicas of Prince Harry and Meghan previously stood next to the Queen and the Duke of Edinburgh. 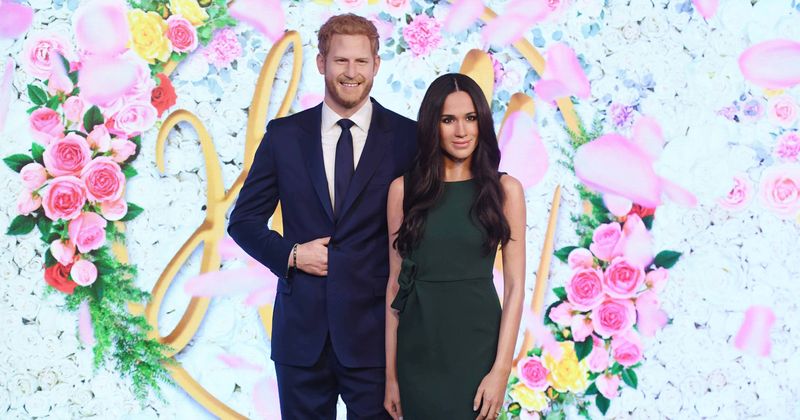 The wax figures of Prince Harry and Meghan have found a new home quite like the couple themselves. The pair's waxworks have now been placed in Hollywood zone at Madame Tussauds in London, reports the Daily Mail. Prince Harry, 36, and Meghan Markle, 39, stepped down as senior working royals in 2020 and are now focussing on their lives in the United States. As for their wax figures, they've joined the likes of showbiz friends like George Clooney and Victoria and David Beckham. The replicas of the pair previously stood next to the Queen and the Duke of Edinburgh, with Kate Middleton and Prince William on the other side.

Madame Tussauds moves Harry and Meghan's figures from the royal display to the Hollywood zone https://t.co/EevcPKr8j2

Tim Waters, General Manager at Madame Tussauds London, told The Sun, "Ever watchful of the celebrity landscape, we’ve moved Prince Harry and Meghan Markle’s figures to join their Hollywood friends, reflecting their new status on the world stage as A-list favourites." This isn't the first time the figurines have been moved. In 2019,  the waxwork of the Duchess was briefly moved to a bar area alongside celebrities like The Beckhams and Tom Hardy.

Steve Davies, previous General Manager at the museum, said, "Meghan continues to carve out her own modern take on life as a royal, and we want to mirror her independent celebrity status in the attraction." When the two decided to step down as royals, they had to be moved again. He added, "Alongside the rest of the world we are reacting to the surprising news that the Duke and Duchess of Sussex will be stepping back as senior royals. From today Meghan and Harry's figures will no longer appear in our Royal Family set. As two of our most popular and well-loved figures, they will of course remain an important feature at Madame Tussauds London as we watch to see what the next chapter holds for them."

A year after leaving their royal duties to move to Los Angeles, Madame Tussauds has now decided waxwork models of Prince Harry and his wife Meghan belong in the attraction's Hollywood zone and not with the other members of the House of Windsor. https://t.co/Jqf9IpEuqm

Prince Harry and Meghan are currently living in their $14 million mansion in California along with their baby boy Archie who recently celebrated his 2nd birthday. As we mentioned, back when he was only 8 months old Prince Harry posed with his son Archie sporting cozy knit caps in a sweet snap taken by Meghan. Archie's hat in the picture was from Make Give Live, an enterprise that helps bring people to knit together in New Zealand. For each item purchased, one is donated to a Kiwi in need. A hat from the foundation was given to Meghan Markle as a gift when the royal couple visited New Zealand in October 2018. So, for Archie's recent birthday the Duke and Duchess of Sussex donated 200 beanies according to the New Zealand-based social enterprise. The couple donated the beanies to the I Got Your Back Pack (IGYBP) initiative, which provides a range of essential items to mothers and children escaping from domestic violence.

Meghan, who is expecting her second child and first daughter with Harry, also celebrated Mother's Day by honoring a local charity in her home state of California. "In honor of Mother's Day, Prince Harry and Meghan, The Duke and Duchess of Sussex, are recognizing the work of Harvest Home, a Los Angeles–based organization that uplifts expectant mothers who are experiencing homelessness," read a statement on their Archewell Foundation website on Sunday.

The Duke and Duchess of Sussex Recognize the Work of Harvest Home on Mother’s Day | Archewell https://t.co/QEXDjat2lg

"Through Archewell Foundation, The Duke and Duchess' mission is to demonstrate compassion in action, spark supportive and connected communities, and build a more equitable and just future. Their aim is to ensure that parents, of every makeup and all walks of life, have the support they need to raise families that thrive," the statement continued. "With this mission in mind, Archewell Foundation, along with Procter & Gamble are fulfilling Harvest Home's online wish list for the women they serve, including diapers for a year and cleaning supplies to stock the shelves at Harvest Home's first facility as well as their new home in progress. From all of us at Team Archewell, Happy Mother's Day. May we all recognize and support the expectant mothers, as well as all mothers, in our lives and communities every day in the year ahead."

The Archewell Foundation is an "impact-driven non-profit created by The Duke and Duchess of Sussex. Our core purpose is to uplift and unite communities—local and global, online and offline—one act of compassion at a time."