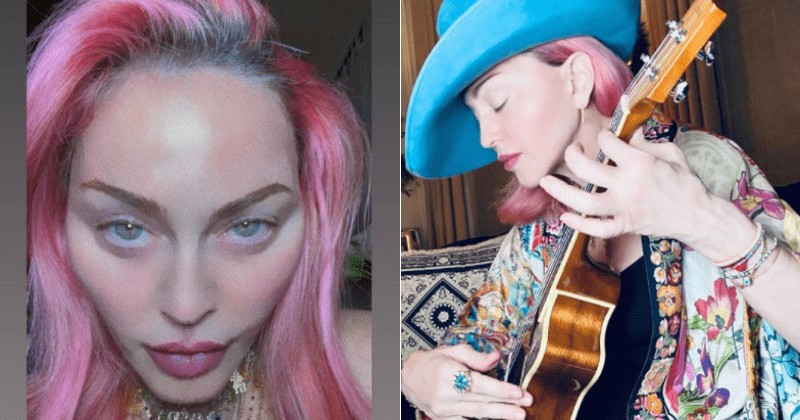 Madonna has been sharing pictures of herself online looking younger than ever, as she spends time at home while the holiday season approaches. The 62-year-old icon recently put up a picture captioned: shiny forehead moon as she flaunted her clear complexion and bubblegum pink hair to her 15 million social media followers. While some fans thought the legendary singer looked flawless others mocked her appearance. One follower commented: Aliendonna. moniflo50 begged: Omg we love you but please stop. Another follower, however, was in awe, writing: Queen please, drop your skincare routine.

According to Daily Mail, fans assume that the singer is recovering from hip surgery. In previous photos put up, Madonna posed on a couch in a pretty, multicolored Johnny Was caftan whilst playing a small ukulele. While the singer has previously performed on stage, she is yet to release a new remix album.  Madonna hasn’t released anything like a remix/mashup compilation since November 2003 with Remixed & Revisited, and before that was her first remix album, You Can Dance, which first dropped on November 17, 1987.

Age is just a number to the "Material Girl" singer. Despite the difficulties that come with age, she's proven time and again that she's got the will to power through it all. Whether it's injuries or mean comments, she takes it like a boss. Earlier this year in March, Madonna was in tears as she struggled to stand after falling off a chair during her Madame X gig in Paris. According to The Sun, the Queen of Pop, had to be supported by a backing dancer after the fall. The "Frozen" singer has been struggling with hip and knee injuries for several months and needed a cane to help her walk. Despite falling off the chair, the icon was determined to keep the show going. Madonna continued with the two-and-a-half-hour show despite breaking down into tears on stage.

She carried on with the show like a trooper https://t.co/kZrayp4KBK

In June, she addressed trolls who commented on an Instagram picture where she posed in a transparent bra. Fans either praised or slammed the 62-year-old after she posted the image where she was dressed down to her underwear: a pair of black panties and a see-through bra. She captioned it: Current Wardrobe Sitch..................And for those of you who are offended in any way by this photo then I want to let you know that I have successfully graduated from the University of Zero F*^ks Given. Thanks for coming to my Graduation Ceremony! 🎓 Class of 2020! 🎉🎉 Fans of the singers were divided about the post. Some were all in praise of the singer. kinoyoga wrote: Love the caption. nataliaparismodel commented: So hot. Others, not so much, and reacted with a "puke" emoji.

Madonna posts crotch shot on Instagram and says she gives 'zero f**s' who she offendshttps://t.co/Uxk2rzjpfF

Back in 2019, people questioned if the musician got 'butt implants' after her New Year's performance just after midnight at New York's Stonewall Inn. During the set, many Twitter users began wondering if the "Like A Prayer" singer's backside looked curvier than usual and speculated that she was wearing some sort of padding under her pants or had gotten butt implants.

I'm more curious to know what's going on "back there"?

Does she still look like she joined a race with Kim Kardashian on who can achieve the most absurd butt implants or did Madonna finally fold her cards? pic.twitter.com/EXOr9rAwOK

Madonna seemed to have responded to the haters with another Instagram photo. According to USA Today, she posted a close-up selfie from New Year's Day, writing: Desperately seeking no ones approval…and entitled to free agency over my body like everyone else! Thank you 2019 🎉🎉🎉! Its Going to Be an amazing Year!! 🔥🔥🔥! #2019 #freedom #respect #nofear #nodiscrimination. It seems she has disabled the comments for this particular post.

Many on Twitter either came to troll the legendary performer or in her defense. Lewy_B_2013 wrote: Just leave #madonna alone. It’s her face and her life. The same people spewing venom are the same ones saying #bekind a few weeks ago. You are all fake. In fact, just before performing, the singer herself gave a speech about starting the New Year with kindness and inclusion. "If we truly took the time to get to know one another, we would find that we all bleed the same color and we all need to love and be loved," she told the crowd. "Let’s remember who and what we are fighting for – ourselves, for each other." She continued: "Let’s take a minute to reflect on how we can bring more love and peace into 2019, let’s look at how we can bring random acts of kindness. Maybe we can find an opening to bring the light in. Are you ready to do that?" Looks like some people just can't.

I actual feel so sorry for Madonna 💔#leavemadonnaalone