The 5-year-old African giant pouched rat was lauded with this honor for his "lifesaving bravery" and "devotion to duty" in Cambodia. 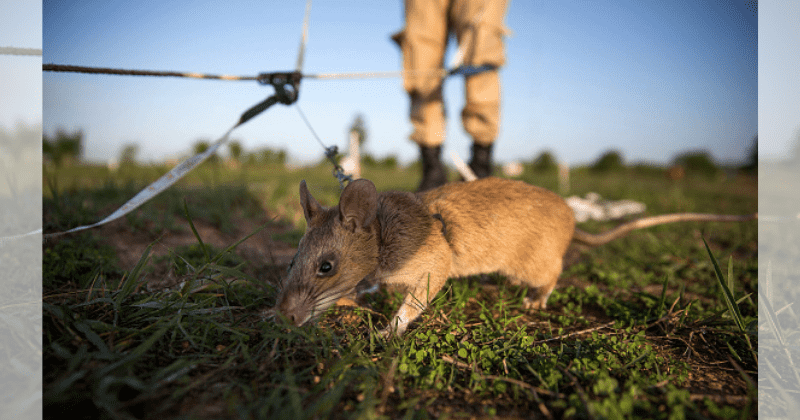 A rodent became the recipient of a gold medal for his "lifesaving bravery" while detecting land mines in Cambodia. Magawa, became the first rat to have received the prestigious award, given out by the British charity, People’s Dispensary for Sick Animals for the past 77 years. It is often known as the animal’s George Cross, which is an honor presented to civilians whose acts of heroism and bravery deserve to be celebrated. Magawa, who was given the medal on Friday via an online ceremony for his "devotion to duty," has surely changed the perception of their kind with this honor as they are often viewed as creatures that run around in the sewers and subways.

To date, Magawa has discovered 39 land mines and 28 pieces of unexploded ordnance, reports the New York Times. In the past four years, the brave rodent has also helped clear over 1.5 million square feet of land. Commending his brave work, the director-general of the charity Jan McLoughlin said, "Magawa’s work directly saves and changes the lives of men, women, and children who are impacted by these land mines. Every discovery he makes reduces the risk of injury or death for local people."

Well done, Magawa! Saw the brilliant rats in training at their base in Tanzania a few years ago: https://t.co/Q4vFqmfIvZ

"Magawa’s dedication, skill, and bravery are an extraordinary example of this and deserve the highest possible recognition," she continued. Magawa, a 5-year-old African giant pouched rat, is bigger than your average rodent. He is a part of the "Hero Rat" initiative which is run by the APOPO, a Belgian nonprofit which works across Africa and South East Asia, which trains rats to detect land mines, tuberculosis, and, in turn, save lives. The 5-year-old was trained to detected TNT, which is the chemical compound present within explosives. Magawa can easily ignore scrap metal which usually shows up on a metal detector while searching for land mines. This ability to sniff out the TNT makes him faster than humans searching for these explosives.

Meet Magawa, he searches for landmines in Cambodia.
He's been awarded a gallantry medal by the @PDSA_HQ. 🏅https://t.co/2Q1EGWIKoU pic.twitter.com/SfxX5epm3w

The African rat, who has been the most successful rodent to take part in the program, can search an area equivalent to a tennis court in just 30 minutes. Meanwhile, it takes at least four days for a person using a metal detector to search an area of that size. Once Magawa locates a mine, he signals his handler by scratching at the earth right above it, and because he of his way lighter-than-human weight there is minimal risk of denoting a mine and injuring himself. APOPO’s chief executive Christophe Cox explained how rats like him "significantly speed up land mine detection using their amazing sense of smell and excellent memory. This not only saves lives but returns much-needed safe land back to the communities as quickly and cost-effectively as possible."

I’m not at all into animal experiments and using them for our benefits; nonetheless this story brought me to tears. Rats are incredibly smart. In this story, I’m happy they’re given names, treated like heroes & are able to retire and live in peace!

The two-foot-long rat's main handler Malen describes Magawa as hardworking and friendly and someone who has an amazing work-life balance. In a statement provided by People’s Dispensary for Sick Animals, Malen who has been his handler for four years said, "He is very quick and decisive, but he is also the first one to take a nap during a break." When he's not out working the mines, rodent loves snacking on watermelons, peanuts, and bananas, in addition to taking a spin on his running wheel. "He is very special to me," said Malen. "He has found many land mines in his career and saved many lives of the Cambodian people."

Yes. The APOPO rats work for treats. Rats are not being forced into mine fields - it's a game to them, like SAR dogs. These are Gambians, not domestic Norway rats. https://t.co/kzrd2ZgG5q

Cambodia is believed to be ridden with more than five million land mines which were laid when the Khmer Rouge was being forced out and during internal conflicts that took place between the 1980s and 1990s. A 2019 report from the Congressional Research Service also revealed that the country still has unexploded ordnance which was dropped during the Vietnam War by United States airstrikes. Magawa's role in determining where the land mines are placed has been absolutely crucial. More than 64,000 people in Cambodia have already been injured by land mines and other explosives since 1979. Per the HALO Trust, the world's largest humanitarian charity that clears land mines, there have been over 25,000 amputees.

Although Magawa's work has been nothing short of excellent, his career may soon come to an end as rats work in these fields for four to five years after which they are given retirement filled with exercise and games. But for now, he may be receiving some edible bonus for his bravery and fruitful work said a P.D.S.A. spokeswoman Emily Malcolm. "I hear he’s partial to bananas and peanuts so I’m sure he will be getting a few extra treats," she noted.

What a lovely demonstration of the intelligence of animals. A truly deserved recognition of the essential work Magawa does in detecting land mines in Cambodia, protecting lives. Please support the PDSA (https://t.co/R7KizdJWmI) and APOPO (https://t.co/KZKH12SSxv).