trending celebrity people lifestyle news animals
Man Refuses To Take Care Of His Wife With Cancer And Abandons Her, Asks If He's Wrong

Man Refuses To Take Care Of His Wife With Cancer And Abandons Her, Asks If He's Wrong

He refused to receive his wife after the hospital discharged her and urged them to send her to a professional nursing facility. 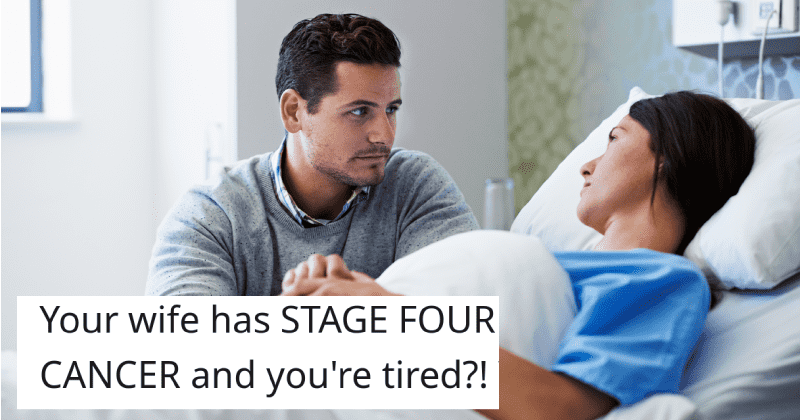 It takes a special kind of man to abandon his partner when they need him most, but let's not get ahead of ourselves. Sorry for the spoilers, but who are we kidding, it's only a surprise when men don't disappoint. Anyway, a man turned to Reddit and asked if it was ok for him to abandon his wife at the hospital after he got tired of taking care of her. He elaborated his troubles on Reddit. "My wife now has stage 4 colon cancer. For the past year and a half, I have had to work and then come home and do the majority of the household chores and I was also treated as the nurse. We have two sons (18M, 16M) and a daughter (15F) that help out, but it became expected of me to be their go-to parent on everything," he wrote.

"A year ago, my wife pretty much stopped being able to do anything for herself. She's exceptionally rude to me, and pretty much screams and cries hysterically all the time, and sometimes mutters on about people who haven't been in our lives for some time. She also blames me for not being " kind" to her when I am putting my entire life on hold when I'm at home and I felt like I didn't even have an identity anymore," he wrote. While we certainly can't allude to his situation here, that's pretty much how the majority of the women feel in this patriarchal world — like their life has been put on hold.

"Over the summer, I have talked to doctors and they told me there was a lot of red tape regarding getting my wife into a nursing home. I talked with my dad (74M) and he told me that from his understanding hospitals if you didn't pick up a patient after discharge three days later the hospital social worker would have to place them into a specialized nursing facility," wrote the man. "Last week, my wife had to be rushed to the emergency room. For the week I didn't have to be her nurse, I realized how much of a strain taking care of a barely lucid, and angry when she was lucid woman had become to me. I realized that I was basically being mom and dad around the house and I was so tired of doing this every single day and then waking up at 6 to go to work." It's never easy caring for someone who is ill.

"When I found out my wife was set to be discharged, I ended up making up my mind. When the hospital called to say that they were going to discharge my wife and I needed to be there to receive her, I told them that I did not want to take care of her anymore," wrote the man.

"The hospital continuously called me back and the person on the other line would beseech me to bring my wife home. However, I stood my ground and said that my wife needed to go to a professional nursing facility and said that the hospital's social workers needed to figure that out." He asked if he was wrong for finally realizing he had reached his limits. To make matters worse, he didn't share his plans with their children either. "My daughter in particular is very upset that her mom is not coming home. My sons screamed at me that they would take care of their mother 24/7 if they had to. However, I knew that the hospital social worker would do his/ her job competently and help my wife into a facility," he concluded.

Redditors sympathized with how hard it can be to take care of someone ill but they still called the man out for his behavior. "I feel for you. Taking care of someone who is very sick as well as three kids and a full-time job... I can sympathize that this is very draining and difficult. However, the way you are going about this is not right and not fair to your wife or your kids. Making a decision to force your wife into a nursing home isn’t fair to her and it isn’t fair to your kids. Your kids are probably going to hate you for this, so if you are ok with your entire immediate family being very upset with you for a long time...well, kudos I guess," wrote one Redditor.