The chance sighting of the cloud formation had a profound impact on Americans, who would like to believe that they are being watched over 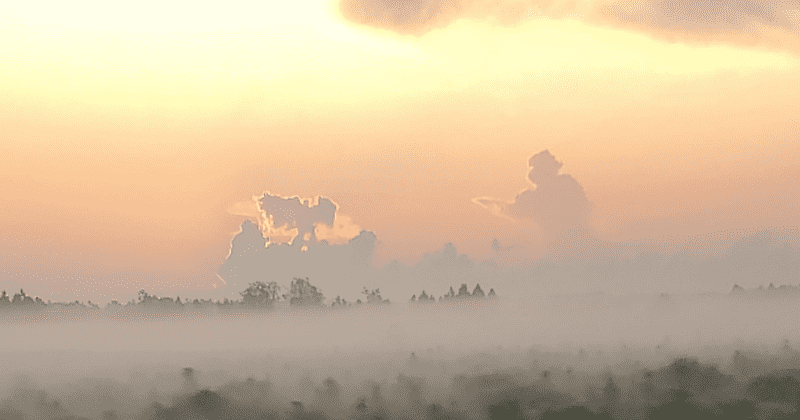 The day 9/11 shook the collective consciousness of the American people. It is a wound that will still take a while to heal. Over 2,000 people lost their lives despite the quick and brave response by emergency workers. Among the casualty were many of the firefighters who courageously tried to save as many people as they could at the cost of their own lives.  Exactly 18 years after the terrorist attack, a teacher saw a spectacular sight on his way to work that will make your heart warm.

The school teacher who captured the stunning image of what he saw is a man from Florida, Matt Snow. On the anniversary of the 9/11 attacks, he saw an extraordinary sight in the sky. The cloud formation was such that he saw an angel who seemed to be facing and walking towards another cloud that looked like a firefighter. He immediately took a picture of this and shared it on his Facebook. In the post, he wrote: It might be because today is 9/11 but this is the cloud formation I saw driving into work today. Doesn't it look a firefighter running with a hose and an angel with the sun perfectly behind it?

The picture quickly caught the attention of the internet as the unique cloud formation was hard to ignore. "I couldn't believe what I just saw. My wife and I are both teachers and we drive that road every morning with our kids. Out of all days, today it looked like that," Snow told Fox News. Many people who saw the picture were in awe of how it looked and would it could signify. Facebook user Peggy Nowacki said, I believe that is one of God’s awesome ways to say all the brave people who died that day and because of it are at peace in His arms. Another user, Lee Oliver stated, Wow! That gave me chills. Even looks smoky.

A chance sighting of the cloud formation had a profound impact on the Americans who would like to believe that they are being watched over. Many survivors of the terrorist attacks have shared their miraculous stories of luck favoring them over the years. In an article for The Atlantic, author of the book The Only Plane in the Sky, Garrett M Graff spoke to a few of the lucky ones. Among them was David Kravette, a broker at Cantor Fitzgerald. He survived because he had to go down to security and check in one of the clients who had forgotten his driver’s license.

Similarly, Jared Kotz was to attend a conference at the Twin Towers but survived because he offered to return to the office to fetch a single publication that was missing from his employee’s booth. These were close encounters that some of the people went through. There were 16 people who were even luckier to have been inside the towers but survived. But the impact of that day stayed with them as well as other New Yorkers, years after. "Everyone else feels like 9/11 was a long time ago. I still feel like we are stuck on September 12, not really able to move beyond it," a survivor's wife told New York Magazine.

Joe Ditmarr was in New York City on business for one day and as a 61-year-old now, that one day is still fresh in his mind. He was on the 105th floor and told ABC News, "I was a very, very fortunate man." He was in a room with no windows and had no idea about what had happened until he reached the lobby of his tower after an emergency evacuation. "The memories and things we saw and felt that day, they come back to us, particularly this time every year," he said and added that he cries every time. "You can't take any day for granted."