The little girl's sister posted the video on Twitter. 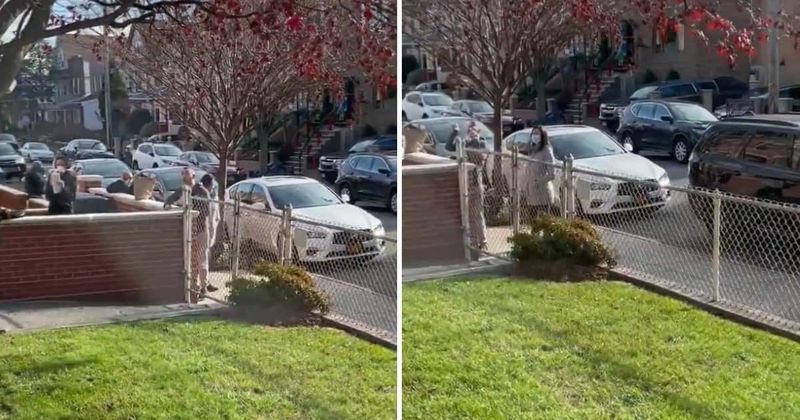 It seems like the number of videos of people having public meltdowns are on the rise. More recently, one video of a man arguing has gone viral. The disturbing part is that he resorts to mocking an innocent child with autism. According to God.dailydot, it's unclear what the man was arguing with his neighbors about. But he did seem very riled up. The woman who claimed to be the child's sister posted the video of the man yelling, on Twitter, where she said he “decided to insert himself” into the argument that didn’t even involve him. In the video, the man can be heard calling the autistic girl and her brother the r-word. "Because you're a weak-minded motherfucker, with a r-----ed fucking daughter, a r-----ed f—king son," he can be heard saying with his mask pulled down. "She's gonna bang her head on the wall with a helmet, right?" In the footage, he's being warned he's being recorded but that doesn't stop him. "That's sad that you have something to say about disabled children," shouts the woman recording him. "That's really sad because we got it on video."

I am appalled by what I witnessed today. This man decided to insert himself into a verbal argument (that did not involve him) against my family, which resulted in him referring to my autistic little sister as “r*******” plus making fun of her stimming and self injury. pic.twitter.com/fkg8DpDNyg

The little girl's sister Zoe outed the man as an employee of the IRS. Super sleuths online were quick to identify the man as Vincent Ventimiglia before his LinkedIn account disappeared. Daily Dot spoke to an IRS employee who did not confirm that Ventimiglia works for the agency but said it would be looked into. For now, many have come in support of Zoe and her sister. Jennifer_Annne tweeted: This is really so crazy I hope everybody sees this. I’m sorry you had to deal with this. Demi_Chimera said: What kind of grown adult makes fun of and name calls children? An immature bully. If he has a wife, I bet he picks on her. If he has kids, he probably picks on them too. He doesn't deserve to be out in the"wild" with humans. The disturbing video was also shared on Reddit where many users were angered by the man's comments. jdmac8705 wrote: Fool needs a Brooklyn beating. A New York nookie. An upper East Side uppercut. How about a Manhattan massacre? Fuckin piece of shit. Others were keen on an update. miked1010 said: Please post an update when he loses his job I beg whoever can make this happen or when he gets his ass kicked...either one.

Call my sister the R word and i hope you think you like nice that day cause you about to meet god. Props for being mature about the situation and this man better lose his job and more https://t.co/mFwieRTLnl

The incident is reminiscent of Donald Trump's infamous mocking of people with disabilities. Back in 2015, BBC reported that Donald Trump mocked a disabled New York Times reporter, Serge Kovaleski, who suffers from a congenital joint condition, at a rally. The reporter has arthrogryposis, a condition that affects the movement of joints and is noticeable in his right arm and hand. Trump called Kovaleski "a nice reporter" but began mocking him by waving his arms around with his hands. He referred to the journalist's 2001 article to back up widely disputed claims that "thousands" of Muslims in New Jersey celebrated the 9/11 attacks. "Now the poor guy, you gotta see this guy," he continued, rudely impersonating him. "Uhh I don't know what I said. Uhh I don't remember. He's going like 'I don't remember. Maybe that's what I said.'"

So ridiculous. Greta must work on her Anger Management problem, then go to a good old fashioned movie with a friend! Chill Greta, Chill! https://t.co/M8ZtS8okzE

The memory. The patience. The execution. pic.twitter.com/EHXqjwvE3a