trending celebrity people lifestyle news animals
Man Climbs Up To Mother's Hospital Window Every Night, Patiently Watches Over Her Until She Dies

Man Climbs Up To Mother's Hospital Window Every Night, Patiently Watches Over Her Until She Dies

Jihad's mother Rasma Salama was undergoing treatment for leukemia when she contracted the Coronavirus. 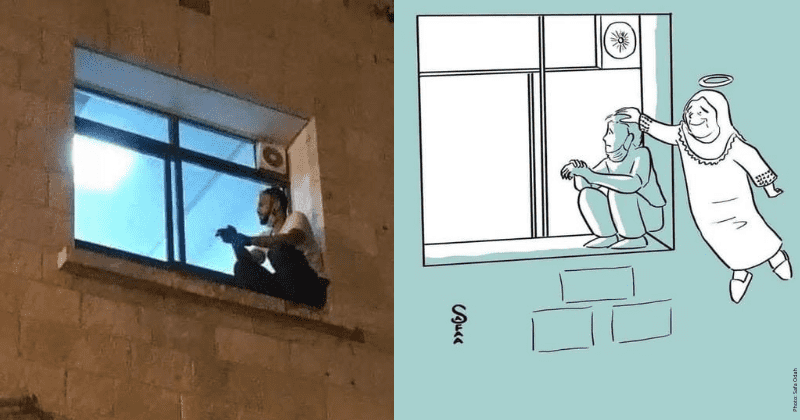 Jihad Al-Suwaiti was heartbroken when he heard his mother had contracted Coronavirus. His mother, Rasma Salama, had already been undergoing treatment for leukemia, and contracting the Coronavirus cut down her chances of survival. She eventually succumbed to the disease but every day till she did, Jihad climbed the hospital window and watched over her, knowing full well, he wouldn't be able to spend time with her in the room because of the contagious nature of the virus. Jihad hails from Palestine where Coronavirus has started to spike, with more than 9000 cases and 60 deaths.

Before she died from coronavirus, the young Palestinian man Jihad al-Sweti used to climb into the hospital's window to check up on his mother. 💔 #Palestine 🇵🇸 pic.twitter.com/uxmBIzrX5u

The state of Palestine is officially recognized as an occupied territory. Palestine's healthcare system isn't built to support the people during a pandemic of this scale. Jihad's brother Abang Jihad Rasmi told local media that Jihad, 30, was incredibly close to his mother and couldn't come to terms with her predicament. His aging mother contracted the disease a few weeks back and died last Thursday. Every night that his mother spent at the hospital, he climbed the window just to have her in his sight and to be with her as the doctors had categorically told him that he wasn't allowed to meet her in the hospital room, reported Bored Panda.

The son of a Palestinian woman who was infected with COVID-19 climbed up to her hospital room to sit and see his mother every night until she passed away. pic.twitter.com/31wCCNYPbs

Abang Jihad Rasmi said his brother had initially refused to accept that his mother had passed away. "[Our] mother had leukemia and was diagnosed with Coronavirus a few weeks ago. Now, he seems to be able to accept the statement," said Abang Jihad Rasmi. The hospital told them that her immune system had taken a hit because of her leukemia diagnosis and as the past few months have shown, those with compromised immunity like Rasma Salama, faced a much higher risk of the virus proving to be fatal. The hospital acknowledged this and apologizing for her death. They added that they could not have done more to help her.

A hospital official had seen Jihad at his mother's window during his nightly visits. "He spent most of his day there, observing his mother’s condition from outside the window, before coming down when he was convinced that his mother was fast asleep," said the official. The heartbreaking image of Jihad sitting by his mom's hospital window waiting for her to fall asleep has gone viral on the internet. It resonated with people who had personally lost someone or knew people who had, to this deadly virus. More than 600,000 people have died because of the Coronavirus all over the world. The image also highlighted the vacuum that'll be left behind by loved ones who pass away.

An illustration of Jihad sitting by the window watching over by his mother as an angel with wings also went viral. The illustration was the work of Safaa Odah who wanted to capture the pain of losing a loved one while also reminding us they always continue to live within us. Many drew from their own personal losses to send Jihad their condolences. One Twitter user wrote: I'm so sorry. I lost my Mommy 2.5 years ago as well. Half your energy, soul, and breath. I hate that we understand this. I hope you heal a little more today. Another user wrote: Four years here... It gets easier, slowly. One day, you will smile before you cry when you think of her. Stay strong and remember the good times. Julie Ambrose wrote: This is heart-wrenchingly beautiful. I hope with all my heart that his mother could see him through that window.